US remembers 9/11 as Biden calls for unity 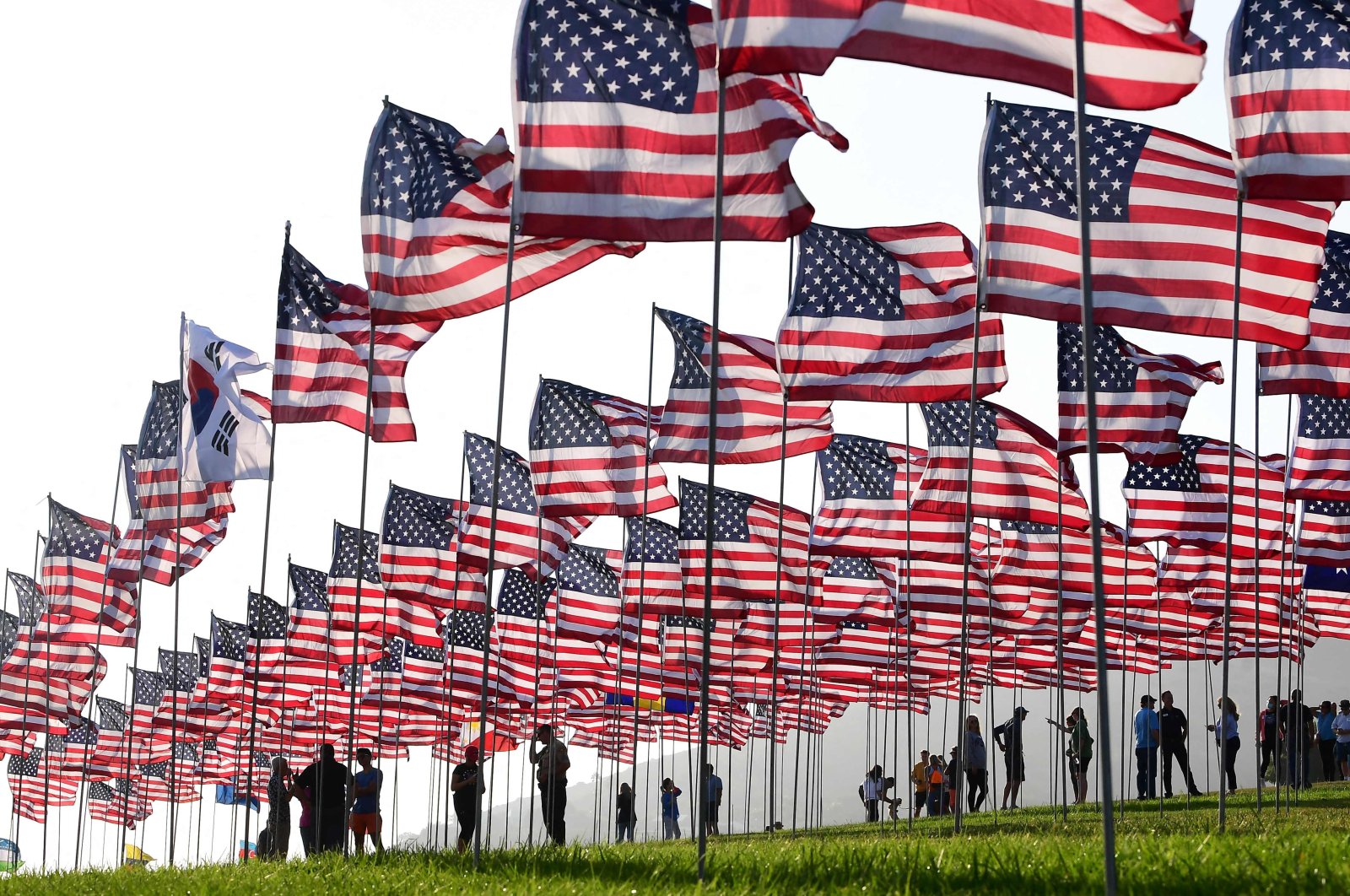 People help with the display of U.S. flags to commemorate the 20th anniversary of 9/11 with the annual Waves of Flags display and remembrance at Pepperdine University in Malibu, California, U.S., Sept. 8, 2021. (AFP Photo)
by ASSOCIATED PRESS Sep 11, 2021 12:28 pm
RECOMMENDED

U.S. President Joe Biden is making an appeal for the nation to reclaim the spirit of cooperation that sprung up in the days following the 9/11 terrorist attacks as he commemorates those who died 20 years ago.

Biden was a senator when hijackers commandeered four planes and exacted the nation's worst terrorist attack in 2001. Now he marks the 9/11 anniversary for the first time as commander in chief.

The president planned to pay his respects at the trio of sites where the planes crashed, but he was leaving the speech-making to others.

Instead, the White House released a taped address late Friday in which Biden spoke of the “true sense of national unity” that emerged after the attacks, seen in “heroism everywhere – in places expected and unexpected.”

“To me, that’s the central lesson of Sept. 11,” he said. “Unity is our greatest strength.”

Biden arrived in New York on Friday night as the skyline was illuminated by the “Tribute in Light,” hauntingly marking where the towers once stood. His first stop on Saturday was to be the National Sept. 11 Memorial, where the twin towers of the World Trade Center were toppled as a horrified world watched on television.

From there he was to visit the field near Shanksville, Pennsylvania, where a plane fell from the sky after heroic passengers fought terrorists to prevent it from reaching its Washington destination. And finally, he was headed to the Pentagon, where the world’s mightiest military suffered an unthinkable blow to its very home.

Biden’s task, like his predecessors before him, was to mark the moment with a mix of grief and resolve. As a man who has suffered immense personal tragedy, Biden speaks of loss with power.

He gave voice to the pain that comes with memories of 9/11 in his video message, saying, “No matter how much time has passed, these commemorations bring everything painfully back as if you just got the news a few seconds ago.”

Robert Gibbs, who served as President Barack Obama's press secretary, said that for Biden, “It’s a moment for people to see him not as Democratic president, but as president of the United States of America.”

“The American people are somewhat conflicted about what they have seen out of Afghanistan the last couple of weeks,” Gibbs said. “For Biden, it’s a moment to try to reset some of that. Remind people of what it is to be commander in chief and what it means to be the leader of the country at a moment of such significance.”

On the 20th anniversary of the attacks, Biden now shoulders the responsibility borne by his predecessors to prevent future tragedy, and must do so against fresh fears of a rise in terrorism after the United States’ hasty exit last month from the country from which the Sept. 11 attacks were launched.

Biden will be the fourth president to console the nation on the anniversary of that dark day, one that has shaped many of the most consequential domestic and foreign policy decisions made by the chief executives over the past two decades.

The terrorist attack defined the presidency of George W. Bush, who was reading a book to Florida schoolchildren when the planes slammed into the World Trade Center. He spent that day being kept out of Washington for security reasons – a decision that then-Senator Biden urged him to reconsider, the current president has written – and then delivered a brief, halting speech that night from the White House to a terrified nation.

The following year, Bush chose Ellis Island as the location to deliver his first anniversary address, the Statue of Liberty over his shoulder as he vowed, “What our enemies have begun, we will finish.”

The wars in Iraq and Afghanistan were still deadly when President Barack Obama visited the Pentagon to mark his first Sept. 11 in office in 2009.

“No words can ease the ache of your hearts,” said Obama.

“We recall the beauty and meaning of their lives,” he said. “No passage of time, no dark skies can dull the meaning of that moment.”

By the time Obama spoke at the 10th anniversary, attack mastermind Osama bin Laden was dead, killed in a May 2011 Navy SEAL raid. Though the nation remained entangled overseas, and vigilant against terrorist threats, the anniversary became more about healing.

President Donald Trump pledged to get the U.S. out of Afghanistan, but his words during his first Sept. 11 anniversary ceremony in 2017 were a vivid warning to terrorists, telling “these savage killers that there is no dark corner beyond our reach, no sanctuary beyond our grasp, and nowhere to hide anywhere on this very large earth.”

On Saturday, as Biden was making his way to all three sites, Bush was to pay his respects in Shanksville while Obama did likewise in New York. Trump planned at least one stop in Manhattan and was to deliver ringside commentary at a boxing match at a casino in Hollywood, Florida.