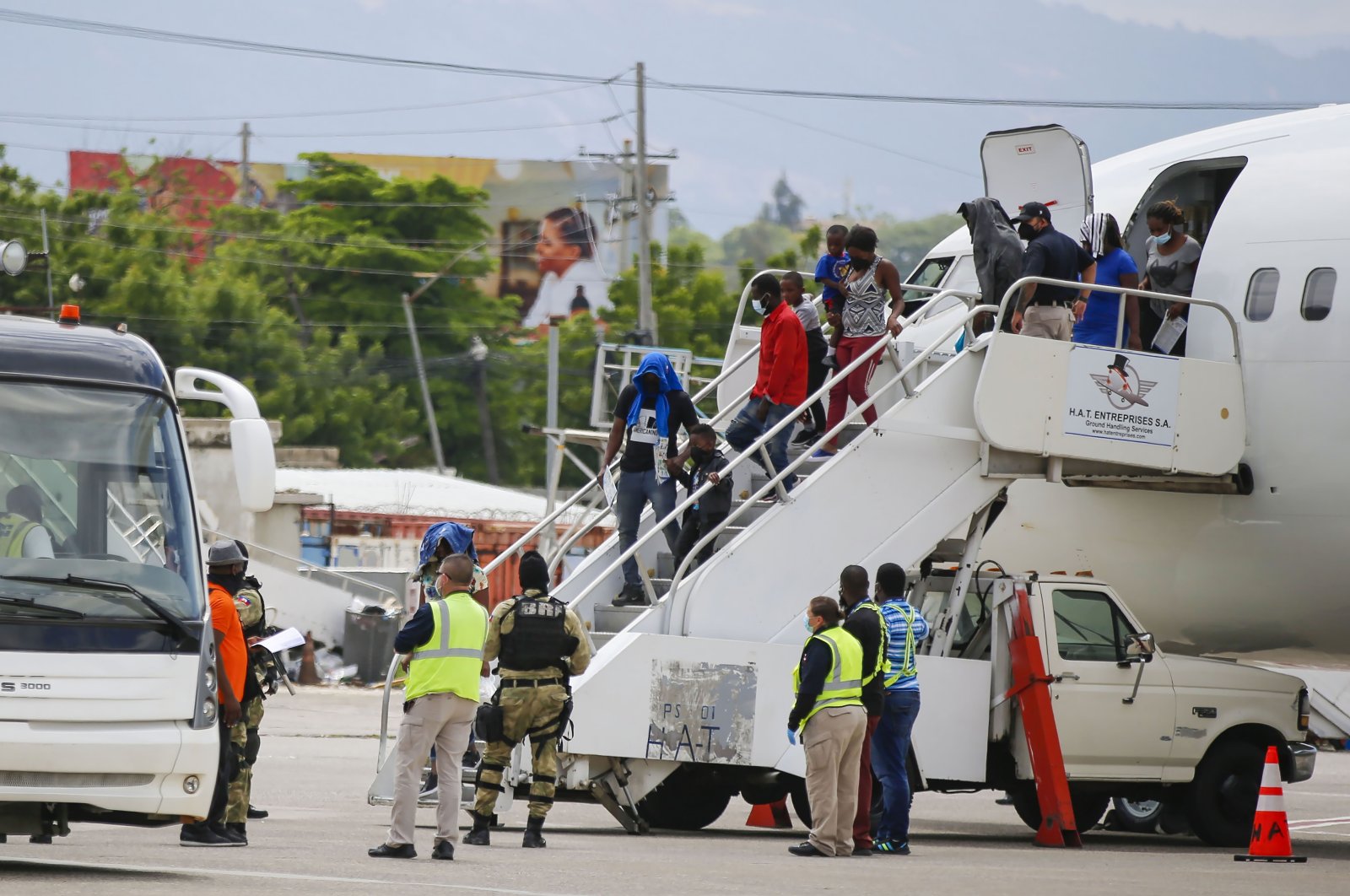 U.S. officials blocked the flow of migrants into Texas from the border with Mexico, where thousands of Haitian refugees have been camping and started flying some of the Haitians back home on Sunday.

About a dozen Texas Department of Public Safety vehicles lined up near the bridge and river where Haitians have been crossing from Ciudad Acuna, Mexico, into Del Rio, Texas, for almost three weeks. Yellow police tape was being used to block them from using a small dam to walk into the U.S.

A Mexican police officer on the Mexican side of the border said migrants will not be allowed to cross anymore. He would not give his name. But an Associated Press (AP) reporter saw Haitian immigrants still crossing the river into the U.S. about 1.5 miles (2.4 kilometers) east of the previous spot.

Several hundred were sitting along the river bank on the U.S. side as 50 to 60 at a time made the crossing to and from Mexico through waist-deep water. There were a few U.S. officers observing the crossings, but taking no steps to stop them.

Many of the migrants have lived in Latin America for years, but they are now are seeking asylum in the U.S. as economic opportunities in Brazil and elsewhere dry up. Thousands are living under and near a bridge in Del Rio.

Meanwhile, the U.S. sent three flights of Haitians taken from Del Rio back to their homeland, and that number is expected to reach at least six per day shortly, according to a U.S. government official who spoke on condition of anonymity because the official was not allowed to discuss the issue publicly. The planes left San Antonio and were expected to arrive Sunday afternoon in Port-au-Prince, Haiti’s capital.

A large number of buses arrived Sunday in Del Rio, and “many, many more” are coming to transfer Haitians to expulsion flights, U.S. immigration detention centers and Border Patrol holding facilities. Departure cities for Haiti-bound flights have yet to be finalized and are being “actively planned," the official said.

The blockade and deportations marked a swift response to the sudden arrival of Haitians in Del Rio, a Texas city of about 35,000 people roughly 145 miles west of San Antonio. It sits on a relatively remote stretch of border that lacks capacity to hold and process such large numbers of people.

The first plane arrived Sunday afternoon at the Port-au-Prince airport. Families held children by the hand or carried them as they exited, and some deportees covered their heads as they walked into a large bus parked next to the plane.

About a dozen officials from various Haitian government agencies gathered to meet with the deported Haitians. Public security officials with the Ministry of Justice requested the presence of Haiti’s national police to prevent any potential violence.

A minibus from the International Organization for Migration (IOM) also was posted at the airport. It was filled with brightly colored bags containing toiletries, hand sanitizer and hair ties.

All the deportees have been tested for COVID-19, and authorities are not planning to put them into quarantine, said Marie-Lourde Jean-Charles with the Office of National Migration.

Haitian Prime Minister Ariel Henry wrote Sunday on Twitter that he is concerned about conditions at the border camp and that the migrants would be welcomed back.

“We want to reassure them that measures have already been taken to give them a better welcome upon their return to the country and that they will not be left behind,” he tweeted. Henry did not provide details about the measures. A Haitian government spokesperson could not be immediately reached for comment.

But another Haitian political leader questioned Sunday whether the nation could handle an influx of returning migrants and said the government should stop the repatriation.

“We have the situation in the south with the earthquake. The economy is a disaster, (and) there are no jobs,” Election Minister Mathias Pierre said, adding that most Haitians can’t satisfy basic needs. “The prime minister should negotiate with the U.S. government to stop those deportations in this moment of crises.”

Some of the migrants at the Del Rio camp said the recent devastating earthquake in Haiti and the assassination of President Jovenel Moïse make them afraid to return to a country that seems more unstable than when they left.

“In Haiti, there is no security,” said Fabricio Jean, a 38-year-old Haitian who arrived in Texas with his wife and two daughters. “The country is in a political crisis.”

Scores of people waded back and forth across the Rio Grande on Saturday, reentering Mexico to purchase water, food and diapers in Ciudad Acuna before returning to the Texas encampment. With that route now blocked, that area of the Mexican city was now deserted but Haitians could be found near their new crossing spot.

Migrant Charlie Jean had crossed back into Ciudad Acuna to get food for his wife and three daughters, ages 2, 5 and 12. He was waiting for a restaurant to bring him an order of rice.

“We need food for every day. I can go without, but my kids can’t," said Jean, who had been living in Chile for five years before beginning the trek north to the U.S.

Haitians have been migrating to the U.S. in large numbers from South America for several years, many having left their Caribbean nation after a devastating 2010 earthquake. After jobs dried up from the 2016 Summer Olympics in Rio de Janeiro, many made the dangerous trek by foot, bus and car to the U.S. border, including through the infamous Darien Gap, a Panamanian jungle.

Crowd estimates varied, but Del Rio Mayor Bruno Lozano said Saturday evening there were more than 14,500 immigrants at the camp under the bridge. Migrants pitched tents and built makeshift shelters from giant reeds known as carrizo cane. Many bathed and washed clothes in the river.

It is unclear how such a large number amassed so quickly, though many Haitians have been assembling in camps on the Mexican side of the border to wait while deciding whether to attempt entry into the U.S.