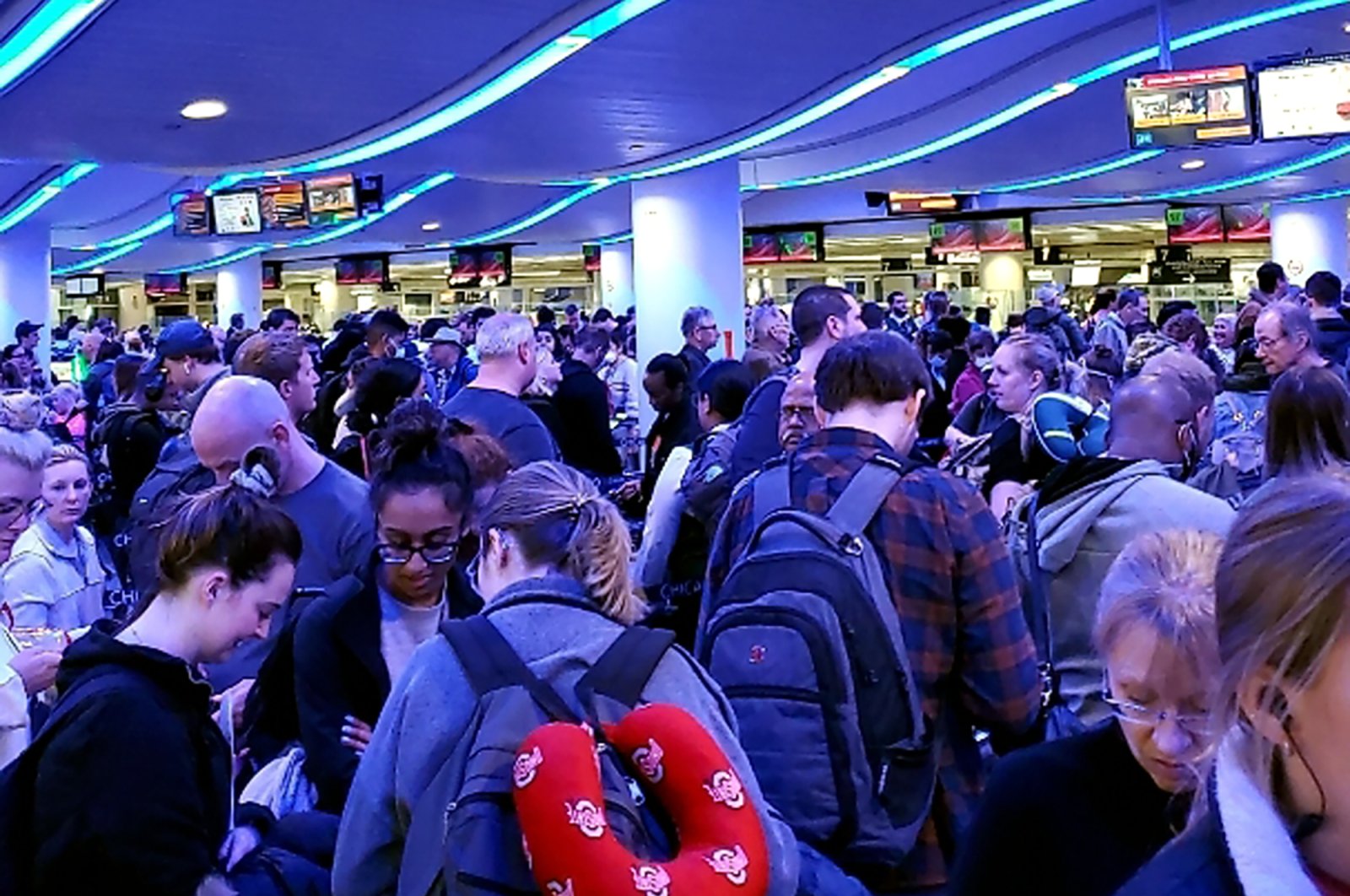 Chaos gripped major U.S. airports Sunday as Americans returning from coronavirus-hit European countries were met by long lines and massive delays at major airports so they could be screened for the coronavirus.

Frustrated passengers complained of hourslong lines, crowded and unsanitary conditions and general disarray in the system for screening people for symptoms of the virus.

"Very close quarters," Ann Lewis Schmidt told CNN, describing conditions at Chicago's O'Hare International Airport (ORD). "So if we didn't have the virus before, we have a great chance of getting it now!" Schmidt said.

Twitter user Sophie Bair said Saturday night that she had waited for four hours at ORD.

"Pics can't even capture the scale of this," she wrote. "We've had to wait in 3 different stages of lines."

"Current wait time over 3 hours. Coughing and sneezing..." he wrote.

"I understand this is very stressful," Chad Wolf, acting secretary of the Department of Homeland Security, said on Twitter. "We will be increasing capacity, but the health and safety of the American public is first & foremost."

The medical screenings, which are in addition to the usual immigration and customs checks through which travelers must pass, take about one minute each, Wolf said.

U.S. airports have been hit with a flood of Americans, many of them students, since restrictions on travel from Europe ordered by U.S. President Donald Trump took effect at midnight Friday.

The United States on Saturday extended the ban on travel from Europe, South Korea and China to Britain and Ireland. Only U.S. citizens and legal residents are being allowed in from those countries, and they are then supposed to self-quarantine for 14 days.

The airport bottlenecks were the latest evidence of continuing turbulence in the administration's response to a pandemic that started in China in December and has since spread worldwide.

In the United States, nearly 60 people have died from the virus and nearly 3,000 have been infected, according to a running tally kept by Johns Hopkins University.

But the epidemic has outpaced the government's capacity to measure its true scope through wide-scale testing as some countries, like South Korea, have managed, leading to fears of an accelerating surge of cases, as Italy has experienced.

"I think Americans should be prepared that they are going to have to hunker down significantly more than we as a country are doing," Anthony Fauci, the country's leading expert on infectious diseases, told NBC's "Meet the Press."

"I think we should really be overly aggressive and get criticized for over-reacting," said Fauci, director of the National Institute of Allergy and Infectious Diseases.

"We are certainly looking at that," said Governor Mike DeWine of Ohio, speaking on "Meet the Press."

Noting the lockdowns in Europe, Illinois Governor JB Pritzker said on the same show, "It's something that we're seriously looking at."

Pritzker has been especially biting in his criticism of the administration's handling of the crisis, firing off angry tweets at Trump and Vice President Mike Pence over the travel chaos at O'Hare.

"You need to do something NOW," he said.

Fauci suggested that Americans in Europe should put off returning home for the moment, calling the airport bottlenecks "unfortunate."

But Pritzker said the problem was going to get worse. "There are a larger number of flights with more people coming and they seem completely unprepared," he said on NBC.

Trump, who had played down the risks of infection early on, was himself tested for the virus Friday night, days after potentially being exposed to it during a visit by Brazil's President Jair Bolsonaro.

"This evening I received confirmation that the test is negative," the president's physician Sean Conley said in a Saturday memo.

Contrary to medical advice, the president was seen Friday shaking hands all around as he gathered his coronavirus response team at the White House – a practice he said Saturday owed to long-time habit as a politician but which he said would have to change.

The White House announced earlier in the day that "out of an abundance of caution, temperature checks are now being performed on any individuals who are in close contact with the president and vice president."

"If you don't have to travel, I wouldn't do it," Trump told the news conference. "We want this thing to end. We don't want a lot of people getting infected."

Trump spoke to British Prime Minister Boris Johnson on Saturday about the new restrictions, according to the White House press office.

The original 30-day U.S. ban on travel from the 26 countries in Europe's Schengen border-free zone took effect on Saturday, but notably excluded Britain and Ireland. They were subsequently included.