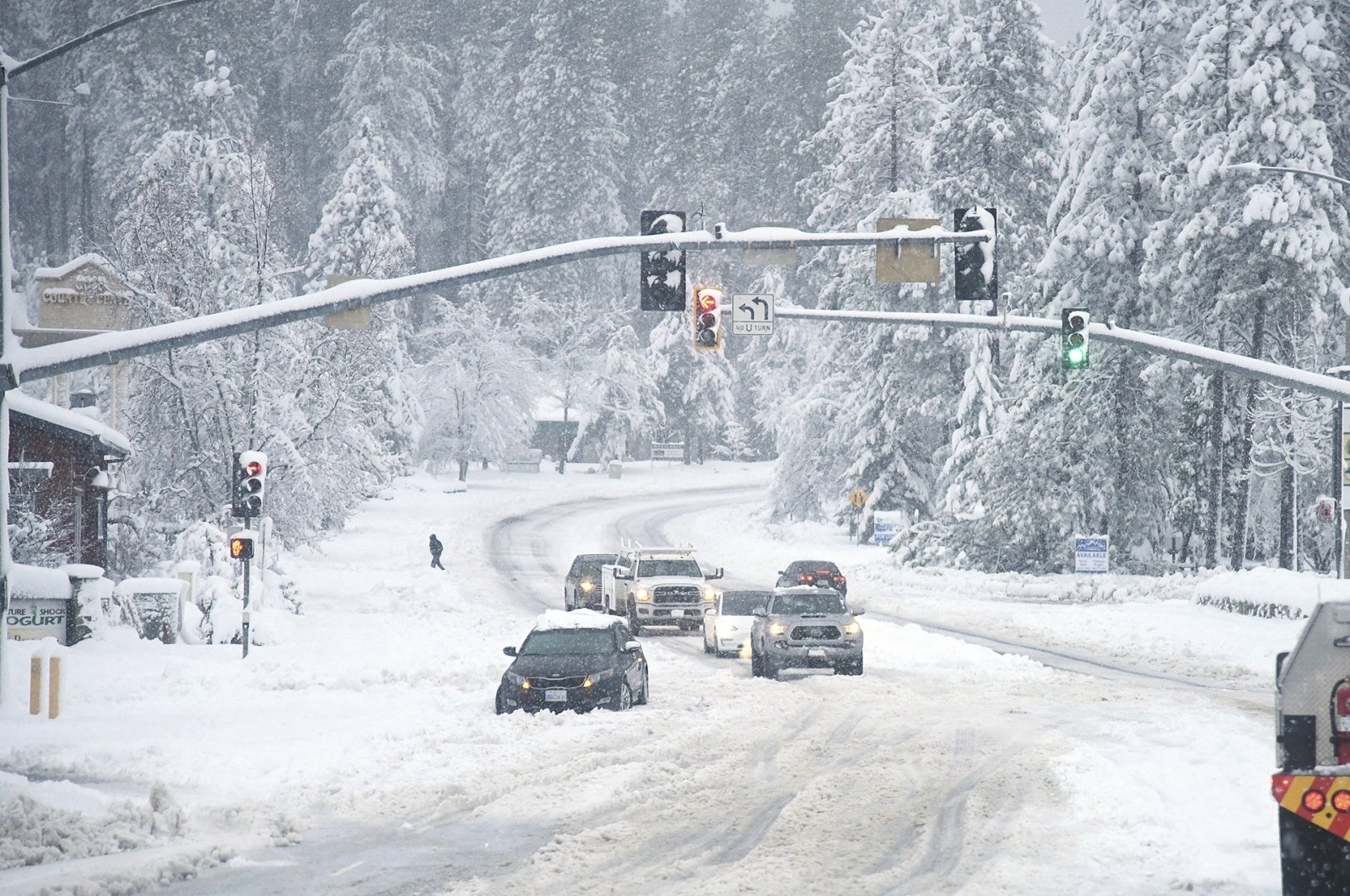 Heavy snowfall and freezing temperatures have plagued the western parts of the United States, forcing the closure of several highways in Northern California and Nevada, and travel warnings in the snowy Sierra Nevada

Severe weather sweeping parts of the U.S. brought frigid temperatures to the Pacific Northwest, heavy snow to mountains in Northern California and Nevada and unseasonable warmth to Texas and the Southeast.

Emergency warming shelters were opened throughout Oregon and western Washington as temperatures plunged into the teens and forecasters said an arctic blast would last for several days. Sunday’s snow showers blew into the Pacific Northwest from the Gulf of Alaska, dumping up to 6 inches (15 centimeters) across the Seattle area.

State officials in Oregon have declared an emergency. In Multnomah County – home to Portland – about a half dozen weather shelters were open. Seattle city leaders also opened at least six severe weather shelters starting Saturday through at least Wednesday.

In West Seattle, Keith Hughes of the American Legion Hall Post 160, said his warming center can welcome about a dozen people – its capacity limited by lack of volunteer staff.

"Volunteers, this is a problem for myself as well as everyone else in town, it’s really hard to get with COVID going on,” he said, adding there were plans to keep the space open for about 10 days.

The last time the Legion post opened its doors long term as a warming center was three days, Hughes said.

"The longer it goes on the harder it's going to be on people that don't have a place to get out of this," Hughes added. "We'll just keep helping people as much as we can help them."

Nearly 200 people stayed at the shelters overnight on Sunday, officials said, and they were expecting the numbers to grow.

Winter weather led to canceled flights in Seattle, Minneapolis, Salt Lake City and elsewhere. Meanwhile, blowing snow in the mountains of Northern California and Nevada closed key highways, with forecasters warning that travel in the Sierra Nevada could be difficult for several days.

At Donner Pass in the Sierra, officials with the University of California, Berkeley’s Central Sierra Snow Laboratory on Monday said recent snowfall has smashed the snowiest December record of 179 inches (4.6 meters), set in 1970. The record is now 193.7 inches as more snow is expected.

"We were definitely not expecting a wet winter," said Andrew Schwartz, lead scientist at the Central Sierra Nevada Snow Laboratory at UC Berkeley, California. "It just so happens that we ended up with a lot more snow this year than we expected, which is a pleasant surprise, of course," Schwartz told Agence France-Presse (AFP).

The Northstar California Resort in Truckee closed its mountain operations on Monday amid blizzard conditions. The ski resort has received more than 6 feet of snow over the last 48 hours, according to the resort's Facebook post.

Search and rescue crews are looking for a missing skier who was last seen Saturday morning on a lift at the ski resort, KCRA reported.

The snowpack in the Sierra was at dangerously low levels after recent weeks of dry weather but the state Department of Water Resources reported on Monday that the snowpack was between 145% and 161% of normal across the range with more snow expected.

Interstate 80 remained closed due to poor visibility and heavy snow from the Nevada state line to Placer County, California. An avalanche blocked a state route that connects Tahoe City to some ski resorts in Olympic Valley and authorities urged motorists to avoid nonessential travel.

Nevada Gov. Steve Sisolak ordered nonessential state workers other than public safety and corrections personnel to remain home due to the storm.

Weather and travel advisories stretched to northeast Nevada and Elko due to the possibility of blowing and drifting snow.

The storms that have been pummeling California and Nevada in recent days also brought rain and snow to Arizona. A record inch of rain in one day was reported at the airport in Phoenix Friday when 11 inches of snow fell at the Arizona Snowbowl ski resort just outside Flagstaff. Another 6 inches of snow were recorded in the 24 hours ending Monday morning.

More storms are expected to hit the desert state starting Monday afternoon and continuing throughout the week.

Temperatures were unseasonably warm in parts of the Southern Plains, including in Arkansas, where several cities broke records on Christmas Day for daily high temperatures.

But forecasters warned that severe storms were possible midweek when a storm system moves through the Deep South, with Alabama and Mississippi at greatest risk for bad weather, according to the Storm Prediction Center in Norman, Oklahoma.

Heavy snow started winding down by Monday evening in California’s Sierra Nevada and the area is expected to get a break from the cold snap by Thursday, said Emily Heller, a meteorologist with the National Weather Service.

Temperatures in western Washington and Oregon aren’t forecast to rise above freezing until at least Thursday, and possibly not until the weekend, forecasters said.

The Lake Tahoe area experienced heavy snowfall throughout the day, with an accumulation of 6-12 inches of snow. Winter Storm Alert ended at 1 a.m. PT on Tuesday.

The National Weather Service said, "In the greater Lake Tahoe area "travel is nearly impossible today," warning that those who leave their house and travel will be stuck in "vehicle for many hours."

Anyone who must travel should "prepare for long delays and carry an emergency kit with extra food, water and clothing."

U.S. airlines canceled nearly 1,000 flights on Monday after grounding thousands of flights over the Christmas holiday weekend, hobbled by staff shortages from COVID-19 infections and bad weather in parts of the country.

Monday's air travel woes capped a glum holiday weekend for thousands of passengers who were stranded in airports and waiting in hourslong customer service lines to rebook flights, often for days after originally planned.

Rapidly rising COVID-19 infections from the omicron variant have forced airlines to cancel flights as pilots and cabin crew fall sick and need to quarantine. The average number of new COVID-19 cases in the United States has risen 55% to over 205,000 per day over the last seven days, according to a Reuters tally.

On Monday, snowy weather in the Pacific Northwest was also part of the reason for more than 80 canceled flights that were due to land at Seattle-Tacoma Airport.

A representative for Alaska Airlines, which canceled more than 120 flights on Monday due partially to snowy conditions in Seattle, told a passenger on Twitter that it would be hours before someone from the airline's customer service could speak by phone, signaling the extent to which airline phone lines were overwhelmed with frustrated passengers.

"The hold time is about 7 hours. I am so sorry," Alaska Airlines wrote on Twitter in response to a customer complaint.

A total of 969 flights into, within or out of the United States were canceled by midday on Monday, according to the flight tracking website flightaware.com.

In another instance of omicron-induced travel misery, the U.S. Centers for Disease Control and Prevention (CDC) said on Monday it was investigating 68 cruise ships after reports of COVID-19 cases on board.

"We continue to work to mitigate the staffing issues we're seeing," a JetBlue spokesperson said.

On the other side of the world, heavy snow also caused traffic jams, flight cancellations and disruption to train services in central Japan on Monday, with record drifts recorded in some areas. More than 3,200 households have been left without power in the region, according to Kansai Electric Power, as officials warned more snow was forecast overnight. No injuries or deaths due to the freezing weather have yet been confirmed, government spokesman Hirokazu Matsuno said.

"A strong winter pressure pattern is causing heavy snow, mainly along the Sea of Japan side of the country from northern to western Japan, with some areas experiencing record snowfall," Matsuno said. "The amount of snow is expected to increase tomorrow ... increased caution and vigilance are still required."

A major road in the Shiga region was closed "due to stranded vehicles," Matsuno said, with TV footage showing long lines of stationary cars that later began to move.

The traffic snarl-up reportedly began when a truck slipped near Hikone city, where 26 inches of snow fell in 24 hours to this morning – 30 times deeper than average – according to public broadcaster NHK.

Nearly 200 passengers were snowed in overnight on a local train line in the region, NHK said.

One picture from a train carriage posted on Twitter showed a huge pile of fresh powder between two open doors as a station lamp illuminated snowflakes against the night sky.

Around 130 domestic flights were canceled on Sunday due to the snow, Jiji Press said, with NHK reporting some 50 cancellations on Monday.