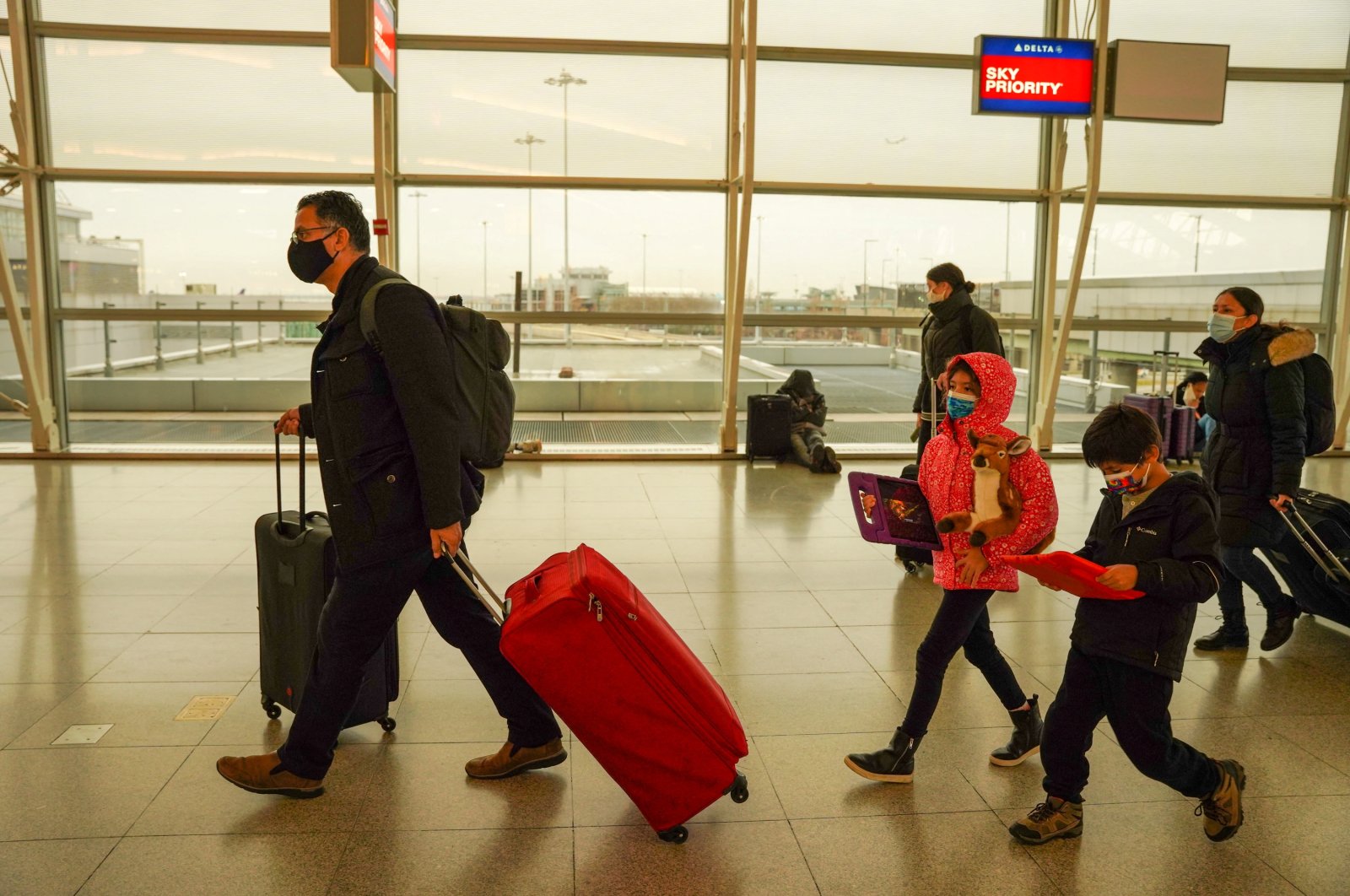 A spike in omicron cases prompted the mass cancelation of flights ahead of Christmas, adding to the pandemic frustration for many people eager to reunite with their families over the holidays

More than 6,000 flights have been canceled worldwide over the long Christmas weekend and thousands more were delayed, a tracking website reported Sunday, as the highly infectious omicron variant dampened the holiday for millions.

Compounding the travel chaos in the United States, severe weather in the country's west is due to wreak havoc on roadways and other routes there although it may well bring a white Christmas weekend to northwest cities Seattle and Portland.

According to Flightaware.com, more than 2,800 flights were scrubbed around the globe on Saturday, including more than 990 originating from or headed to U.S. airports, with over 8,500 delays as of 5 a.m. GMT.

There were around 2,400 cancellations and 11,000 delays on Friday, while Sunday cancellations were at nearly 1,500 with more than 1,400 delays also reported.

Pilots, flight attendants and other employees have been calling in sick or having to quarantine after exposure to COVID-19, forcing Lufthansa, Delta, United Airlines, JetBlue, Alaska Airlines and many other short-staffed carriers to cancel flights during one of the year's peak travel periods.

"Help @united flight canceled again. I want to get home for Christmas," one exasperated traveler from the U.S. state of Vermont tweeted to the airline early Saturday.

The flight-tracking website noted nearly 1,000 canceled flights were entering, leaving or inside the U.S. Saturday, up from 690 flights scrapped on Friday. Over 250 more flights were already canceled for Sunday. FlightAware does not say why flights are canceled.

Delta, United and JetBlue had all said Friday that the omicron variant was causing staffing problems leading to flight cancellations. United spokesperson Maddie King said staffing shortages were still causing cancellations and it was unclear when normal operations would return. “This was unexpected,” she said of omicron’s impact on staffing. Delta and JetBlue did not respond to questions Saturday.

According to FlightAware, the three airlines canceled more than 10% of their scheduled Saturday flights. American Airlines also canceled more than 90 flights Saturday, about 3% of its schedule, according to FlightAware. American spokesperson Derek Walls said the cancellations stemmed from “COVID-related sick calls.” European and Australian airlines have also canceled holiday-season flights because of staffing problems tied to COVID-19.

For travelers, that meant time away from loved ones, chaos at the airport and the stress of spending hours standing in line and on the phone trying to rebook flights. Peter Bockman, a retired actor, and his daughter Malaika, a college student, were supposed to be in Senegal on Saturday celebrating with relatives they hadn’t seen in a decade. But their 7:30 p.m. GMT flight Friday from New York to Dakar was canceled, which they found out only when they got to the airport. They were there until 2 a.m. trying to rebook a flight.

“Nobody was organizing, trying to sort things out,” he said, faulting Delta for the lack of customer service. “Nobody explained anything. Not even, ‘Oh we’re so sorry, this is what we can do to help you.’”

Their new flight, for Monday evening, has a layover in Paris, and they are worried there will be issues with that one as well. They have already missed a big family get-together that was scheduled for Saturday.

FlightAware’s data shows airlines scrapped more than 6,000 flights globally for Friday, Saturday and Sunday combined as of Saturday evening, with almost one-third of affected flights to, from or within the United States. Chinese airlines made up many of the canceled flights, and Chinese airports topped FlightAware’s lists of those with the most cancellations. It wasn’t clear why. China has strict pandemic control measures, including frequent lockdowns, and the government set one on Xi’an, a city of 13 million people, earlier this week.

Employees who answered the phone Sunday at customer hotlines for Air China and China Eastern airlines said they had received no notice of canceling flights to or from the U.S.

Air China usually flies between New York City and Shanghai twice a week. China Eastern has two weekly flights to Los Angeles, one from Beijing and the other from the southern city of Shenzhen. Another Chinese airline, Hainan Airlines, suspended flights to the U.S. early in the pandemic.

The Civil Aviation Administration of China’s flight schedule through the end of March shows a total of 408 international flights planned per week. That is down 21% from a year earlier.

Flight delays and cancellations tied to staffing shortages have been a regular problem for the U.S. airline industry this year. Airlines encouraged workers to quit in 2020, when air travel collapsed, and were caught short-staffed this year as air travel recovered.

To ease staffing shortages, countries including Spain and the U.K. have reduced the length of COVID-19 quarantines by letting people return to work sooner after testing positive or being exposed to the virus.

Delta CEO Ed Bastian was among those who have called on the Biden administration to take similar steps or risk further disruptions in air travel. On Thursday, the U.S. shortened COVID-19 isolation rules for health care workers only.

More than 100 domestic flights in Japan were grounded on Sunday due to heavy snow in the northern and western parts of the country, Japan's two biggest airlines said. ANA Holdings had halted 77 flights as of 1 p.m. local time, affecting about 5,100 passengers, said Yutaka Kitahara, the company's operations director.

"As the weather situation in northeastern Japan remains unstable, there could be more cancellations to come," Kitahara said.

Japan Airlines Co. had canceled 35 flights as of 10 a.m., affecting 1,810 passengers, a representative with the airline's operations division said.

Japan, which tightened border controls to counter the threat from omicron, has reported only about a dozen cases of community spread of the new variant and 231 total omicron infections, including overseas arrivals, according to the health ministry.

According to estimates from the American Automobile Association, more than 109 million Americans were scheduled to travel by plane, train or automobile between Dec. 23 and Jan. 2, a 34% increase over the last year.

But most of those plans were made before the outbreak of omicron, which has become the dominant strain in the U.S., overwhelming some hospitals and healthcare workers.

On the weather front, while unseasonably warm temperatures were bathing eastern states, the National Weather Service (NWS) announced winter storm warnings, including a deep freeze for significant parts of the west.

"Anomalously cold conditions and a barrage of Pacific moisture results in prolonged periods of mountain snow and coastal/valley rain, some of which may fall heavy at times," the NWS said in an advisory.

An eye-popping 2 feet to 4 feet (61centimeters to 122 centimeters) of snow was forecast to fall this weekend, with higher accumulation in some spots, in the northern and central Sierra mountains of California and Oregon.

The NWS added that travel would be "treacherous to at times impossible" from the Sierras to the central Rocky Mountains over the weekend due to whiteout snow conditions.