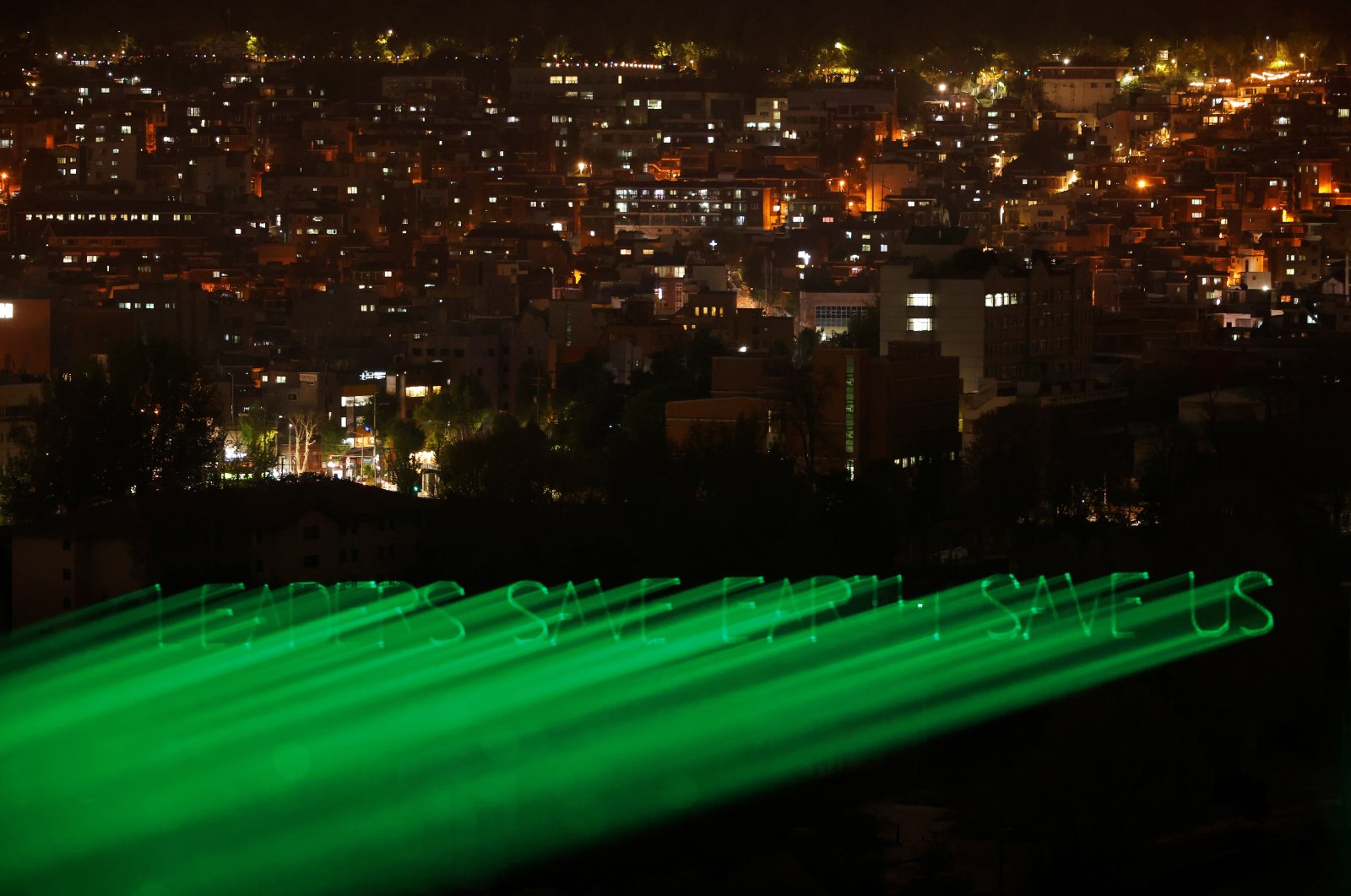 A message that reads "LEADERS SAVE EARTH SAVE US" is projected by Green Peace activists ahead of a climate change summit led by U.S. President Joe Biden, in Seoul, South Korea, April 21, 2021. (Reuters Photo)
by Reuters Apr 21, 2021 8:37 pm
RECOMMENDED

The United States is still putting the finishing touches on its plan to cut its greenhouse gas emissions by 2030, ahead of a summit this week with world leaders, including Russia's President Vladimir Putin and China's President Xi Jinping.

President Joe Biden's administration has been pressing other countries to make ambitious targets to reduce their emissions but has yet to unveil its own plan. Before the summit begins Thursday, the White House is expected to announce a target to cut emissions by roughly 50% by 2030 compared with 2005 levels.

"Still a lot of time left before the summit starts," an administration official told reporters early Wednesday when pressed about the target, known as a Nationally Determined Contribution or NDC.

The U.S. has been the largest historic emitter of greenhouse gasses and currently ranks second only to China. Its target will be watched closely as a signal of how seriously Biden takes climate change. He has promised to restore U.S. leadership on global warming after former President Donald Trump withdrew the country from the Paris climate accord.

Biden brought the U.S. back into the Paris agreement in January, and the two-day summit is designed to showcase a renewed U.S. and global commitment to limit planetary warming to 1.5 degrees Celsius (2.7 degrees Fahrenheit) above pre-industrial levels in order to prevent cataclysmic climate impacts.

A Biden executive order that will direct the U.S. Treasury and other key agencies to develop a strategy on climate-related risks for public and private financial assets was initially expected this week but is delayed, a source familiar with the situation said.

"In the next days and hours, many other increases of ambition will be articulated," Biden's international climate envoy John Kerry said at an event hosted by the Washington Post Wednesday morning.

Over the last 24 hours, Kerry has announced measures that will help the U.S. reduce its share of global emissions, including tackling emissions from shipping and a partnership with financial firms.

Activists, some corporations and other world leaders want an aggressive U.S. target, and some reacted early to say a roughly 50% cut would not be sufficient.

"While many will applaud the president’s commitment to cut U.S. emissions by at least half by 2030, we have a responsibility to tell the truth: it is nowhere near enough," said Evan Weber, political director of influential youth activists group, the Sunrise Movement, adding that the reported pledge "will be a death sentence for our generation and the billions of people at the frontlines of the climate crisis in the U.S. and abroad."

Leaders from across the globe are participating in the summit, which will be held virtually because of the COVID-19 pandemic.

Meanwhile, the European Union struck a major deal that could make the 27-nation bloc climate-neutral by 2050 as member states and the EU parliament agreed on the targets on the eve of a virtual summit hosted by Biden.

“Our political commitment to becoming the first climate-neutral continent by 2050 is now also a legal commitment. The Climate Law sets the EU on a green path for a generation,” said EU Commission President Ursula von der Leyen early Wednesday.