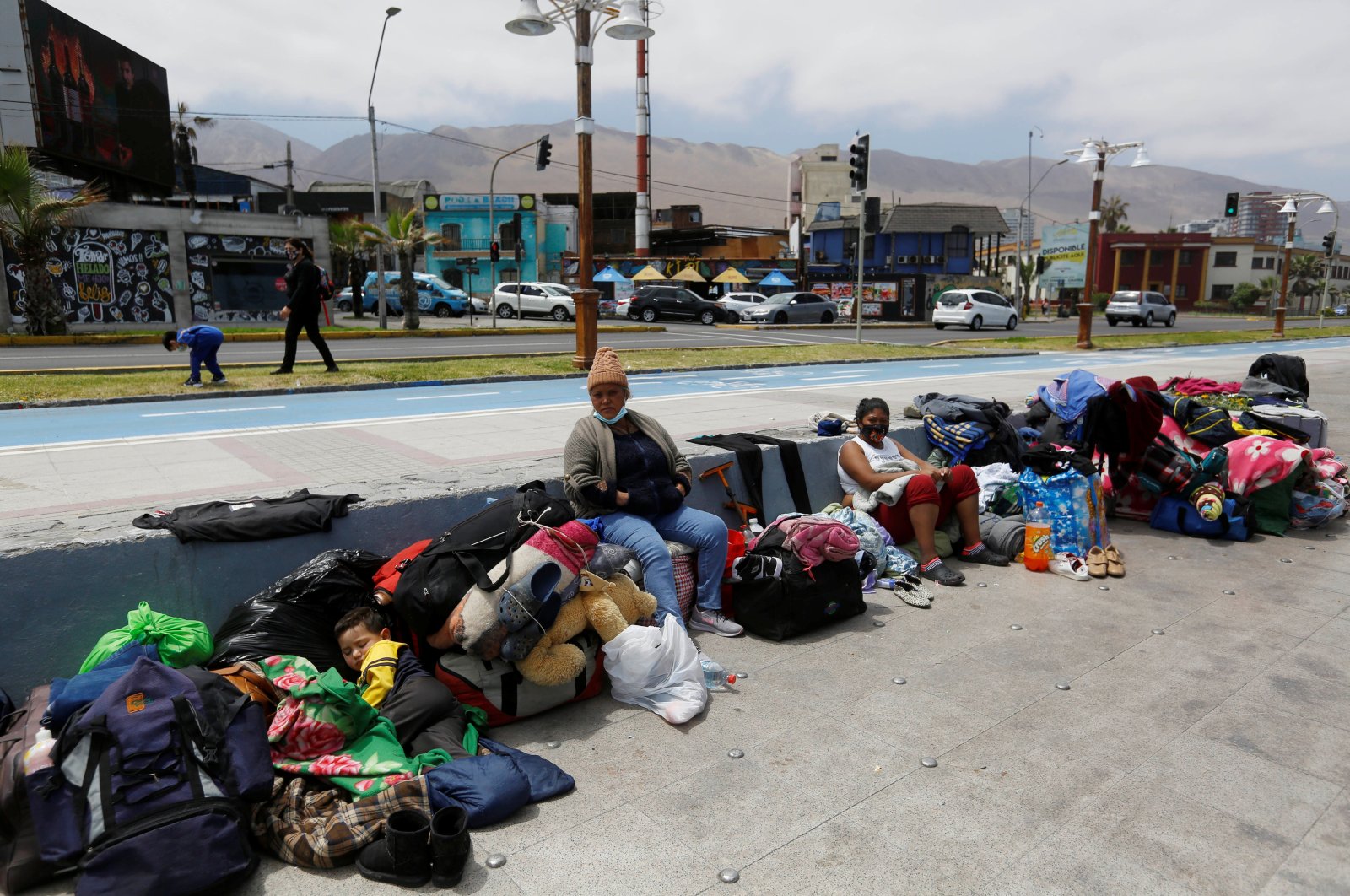 Venezuelan migrants sit along a street next to the ocean after their camp was destroyed during violent anti-immigration protests, in Iquique, Chile, September 27, 2021. (Reuters Photo)
by French Press Agency - AFP Sep 28, 2021 7:49 am
RECOMMENDED

The United Nations slammed the violence and "xenophobia" targeting mainly Venezuelan undocumented migrants in Chile over the weekend that was carried out by locals fed up with their presence in the country.

About 3,000 protesters took to the streets of the northern port city of Iquique on Saturday, some burning the belongings of rough-sleeping migrants who had been occupying a public square for months.

In a tweet, the U.N. mission in Chile on Monday urged the "authorities and the population to act within the framework of respect for human rights and international humanitarian rights."

The world body expressed its willingness to provide technical assistance and to "collaborate in the efforts of national and local authorities."

The Iquique protesters waved Chilean flags and chanted slogans against the migrants, most of them fleeing dire economic conditions in Venezuela by crossing the Andes mountains and Atacama desert.

Eduardo Stein, the U.N. Refugee Agency and U.N. Migration Agency's representative for Venezuelan migrants, expressed his "sadness and dismay" at what he described as acts of hate and intolerance.

"Discrimination and xenophobia have no place in our countries and must be firmly condemned," he said.

"We categorically condemn the brutal aggression that an uncontrolled mob committed against a group of undocumented migrants from Venezuela," said Pinera, who was on a visit to Uruguay.

"We are doing everything necessary to ensure this crime does not go unpunished."

Venezuelan President Nicolas Maduro denounced the violence as "xenophobic" and "discriminatory" in a televised address.

"We are going to respond ... for these compatriots who are in Iquique," he said.

The leftist leader indicated that he had activated the "Return to the Homeland" program – launched in August 2018 to facilitate the voluntary return of migrants – for those wishing to go home.

The demonstration took place a day after police evacuated a migrant camp that had existed for a year on the town square. Most of the migrants, poor and undocumented, are surviving on odd jobs and sleeping in tents.

Venezuela, meanwhile, is in an unprecedented economic and political crisis that has led millions of people to leave their country, rich in oil resources but mismanaged and rife with dysfunction.

Venezuela's national currency, the bolivar, has lost 73% of its value to the dollar so far this year. Inflation is about 3,000%.

According to the Jesuit Migrant Service, more than 23,000 undocumented people entered Chile, a country of 19 million, from January to July – almost 7,000 more than in the whole of 2020.