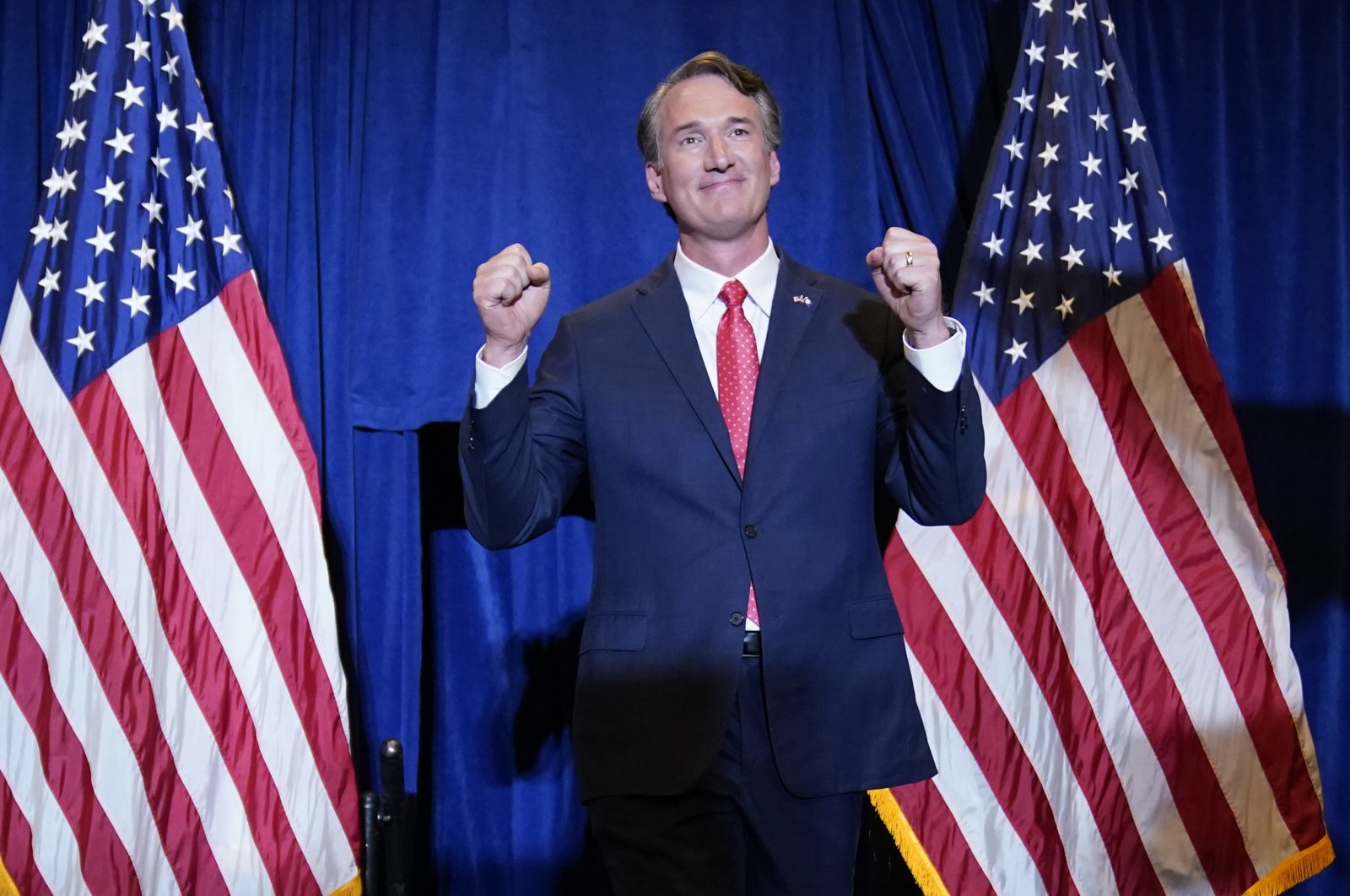 The 54-year-old Youngkin's defeat of Democrat Terry McAuliffe marked a sharp turnabout in a state that has shifted to the left over the past decade and was captured by President Joe Biden last year by a 10-point margin. It is certain to add to the Democrats' anxiety about their grip on political power heading into next year's midterms, when the party's thin majority in Congress could be erased.

"This is the spirit of Virginia coming together like never before," Youngkin told cheering supporters in a hotel ballroom in Chantilly, about 25 miles (40 kilometers) west of Washington.

AC/DC’s "Thunderstruck” had blared from speakers as the race was called after midnight. Youngkin promised to lead not just from the state capital but with "a vision where Virginians’ power, the power that has historically resided in the marble halls in Richmond is spread out, spread out into the kitchen tables that are held together with the bond and the spirit of liberty and freedom.”

In addition to the stinging Virginia loss for the Democrats, New Jersey Gov. Phil Murphy was in a close fight as he sought to become the first Democratic governor to win reelection in the state in more than four decades. Biden won there by more than 15 points in 2020. The elections were the first major tests of voter sentiment since Biden took office, and the results were a stern warning sign.

His administration has been shaken in recent months by the chaotic withdrawal from Afghanistan, persistent challenges in emerging from the pandemic and a legislative agenda at risk of stalling on Capitol Hill. Youngkin, a political neophyte, was able to take advantage of apparent apathy among core Democratic voters fatigued by years of elections that were seen as must-wins. He successfully portrayed McAuliffe, a former Virginia governor, Democratic National Committee chairman and close friend of Bill and Hillary Clinton, as part of an elite class of politicians. He also seized on a late-stage stumble by McAuliffe, who during a debate performance suggested parents should have a minimal role in shaping school curriculums.

Perhaps most significantly, Youngkin prevailed in a task that has stumped scores of Republicans before him: attracting Trump's base while also appealing to suburban voters who were repelled by the former president's divisive behavior.

During the campaign, Youngkin stated his support for "election integrity,” a nod at Trump's lie that the 2020 presidential election was stolen, while also focusing on education and business-friendly policies. He never campaigned in person with Trump, successfully challenging McAuliffe's effort to cast him as a clone of the former president.

Cincinnati is getting its first Asian American mayor, Aftab Pureval. Minneapolis voters rejected a ballot initiative that sought to overhaul policing in their city, where George Floyd was killed by a white police officer on Memorial Day 2020, sparking the largest wave of protests against racial injustice in generations.

The initiative would have replaced the police force with a Department of Public Safety charged with undertaking "a comprehensive public health” approach to policing. But no other contest in this off-year election season received the level of national attention – and money – as the governor's race in Virginia, a state with broad swaths of college-educated suburban voters who are increasingly influential in swaying control of Congress and the White House.

A former co-CEO at the Carlyle Group with a lanky, 6′6″ build that once made him a reserve forward on Rice University's basketball team, Youngkin poured vast amounts of his personal fortune into a campaign that spent more than $59 million. Favoring fleece vests, Youngkin sought to cut the image of a genial suburban dad.

Youngkin ran confidently on a conservative platform. He opposed a major clean energy mandate the state passed two years ago and objected to abortion in most circumstances. He also backed a business-friendly approach to the state’s economy, opposed mask and vaccine mandates, promised to expand Virginia’s limited charter schools and ban critical race theory, an academic framework that centers on the idea that racism is systemic in the nation’s institutions and that they function to maintain the dominance of white people. In recent months, it has become a catch-all political buzzword for any teaching in schools about race and American history.

McAuliffe tried to energize the Democratic base by highlighting abortion, denouncing a new Texas law that largely banned the procedure and warning that Youngkin would seek to implement similar restrictions. Youngkin didn't discuss abortion much publicly, and a liberal activist caught him on tape saying the issue couldn't help him during the campaign. He said an election win would allow the party to "start going on offense” on the issue.

While McAuliffe pulled on the star power of a host of national Democrats, including former President Barack Obama and ex-Georgia governor candidate Stacey Abrams, Youngkin largely campaigned on his own, focusing on issues he said were important to Virginians.

Youngkin also proved perhaps most successful in deflecting McAuliffe's efforts to tie him to Trump and the former president's divisive political style. Polls showed the race tightening after McAuliffe said during a late September debate that he didn’t think "parents should be telling schools what they should teach."

That prompted Youngkin to run hundreds of TV ads on the statement and to focus on his own pledges to make school curricula less "un-American” and to overhaul policies on transgender students and school bathrooms. Asked about issues more generally, voters saw the economy as most important, according to AP VoteCast, a statewide survey.

Some 34% of Virginia voters ranked the economy as their No. 1 priority, compared to 17% saying COVID-19 and 14% choosing education. Those issues outranked health care, climate change, racism and abortion in the survey.

The race took an especially bitter turn last week, when Youngkin ran an ad featuring a mother and GOP activist who eight years ago led an effort to ban "Beloved,” the Pulitzer Prize-winning novel by Black Nobel laureate Toni Morrison, from classrooms. McAuliffe accused Youngkin of uncorking a "racist dog whistle," but Youngkin said Virginia parents knew what was really at stake – and so did families across the country.

That was a nod to how tapping into parental activism could work for the GOP next year and in future election cycles. "America is watching Virginia," Youngkin said as part of his closing argument. "And America needs us to vote for them too.”