300 detained in Bangladesh amid riots triggered by Quran defiling 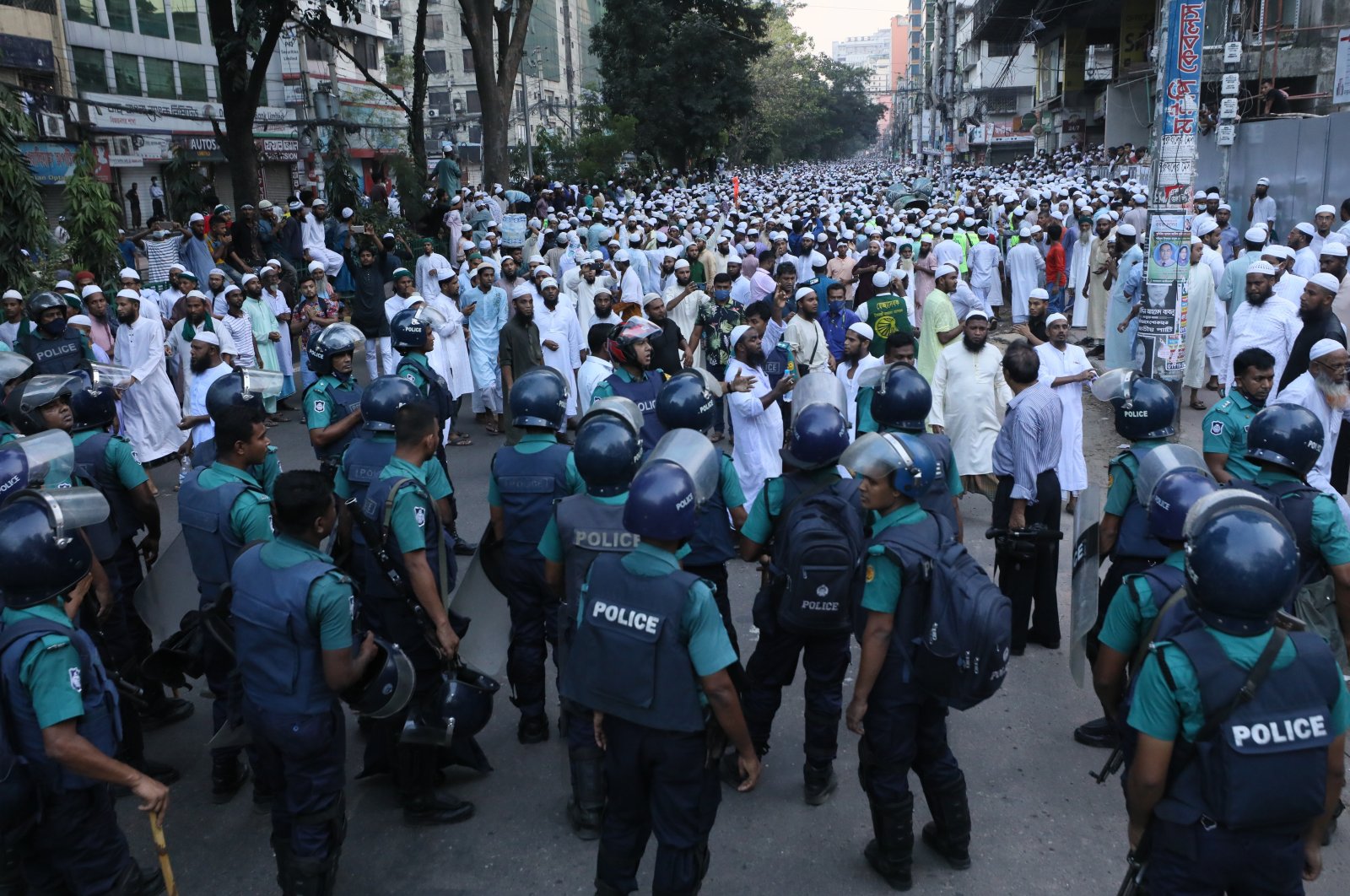 Protesters participate in a demonstration over an insult to Islam, outside the country’s main Baitul Mukarram Mosque in Dhaka, Bangladesh, Oct. 16, 2021. (AP Photo)
by DAILY SABAH WITH AGENCIES Oct 18, 2021 10:24 am
RECOMMENDED

Police in Bangladesh have detained at least 300 suspects for attacking and vandalizing Hindu temples in various parts of the country following unrest triggered by the reported desecration of the Muslim holy book, the Quran, during a Hindu religious ritual last week, law enforcement sources said Monday.

Violence erupted across Bangladesh after a photo was widely circulated on social media Wednesday showing the Quran placed on the knee of a Hindu deity during celebrations for the Durga Puja festival in the east-central district of Comilla.

Angry rioters attacked Hindu temples and clashed with police in various areas amid the unrest in the following days, leaving at least six dead, including two Hindus and more than 100 injured. At least 35 Hindu temples in several districts, mostly Comilla and the port city of Chattogram, have been reportedly attacked, as reported by Anadolu Agency (AA).

Bangladeshi police said over 200 attackers beat and stabbed to death an executive member of a temple committee in the southern city of Begumgan. According to Agence France-Presse (AFP) another body of a Hindu man was found near the pond close to one of the attacked temples.

“Two men have died since yesterday’s attack. We are working to find the culprits,” district police chief Shahidul Islam told AFP on Sunday. Among other casualties are four protesters who came under police fire on Wednesday in Hajiganj, one of several towns hit by the riots.

Police have filed 50 cases, including in the capital Dhaka, charging at least 10,000 people in connection with the incidents. Home Minister Asaduzzaman Kamal told the media Sunday that police were investigating the issue.

"We hope that we will be able to arrest the guilty who have vandalized the temples and prompted the violence,” he said, adding that a "third party” may be involved in the anarchy to tarnish the long-prevailing communal harmony and tolerance in Bangladesh.

Meanwhile, the government and the main opposition political party, the Bangladesh Nationalist Party (BNP), have publicly blamed each other for the incident. Road Transport and Bridges Minister Obaidul Quader, who is also general secretary of the ruling Awami League, while addressing a public function in Dhaka on Sunday accused the BNP of being the "number one” patron of sectarian evil forces.

BNP Secretary General Mirza Fakhrul Islam Alamgir at a press briefing Sunday meanwhile alleged that "government agents” placed the Quran on the lap of the Hindu idol with an immoral motive of blaming the opposition. He also accused ruling party supporters of destroying Hindu temples and other settlements in the southern district of Noakhali.

Meanwhile, a group of agitated people in the country’s northern border district of Rangpur set fire to dozens of Hindu homes Sunday night after a Facebook post allegedly by a Hindu youth insulting Islam's holiest site, the Kaaba, went viral. Local firefighting units and members of law enforcement agencies rushed to the area and brought the situation under control.

“We ask the government to arrest those who defamed the Quran by putting it at the feet of an idol in Cumilla,” the president of Bangladesh’s Islami Movement Mosaddek Billah al-Madani said. He added that protesters demanded “the death sentence” for those responsible for the images. Separately, some 1,000 Hindus held a demonstration against attacks on temples.