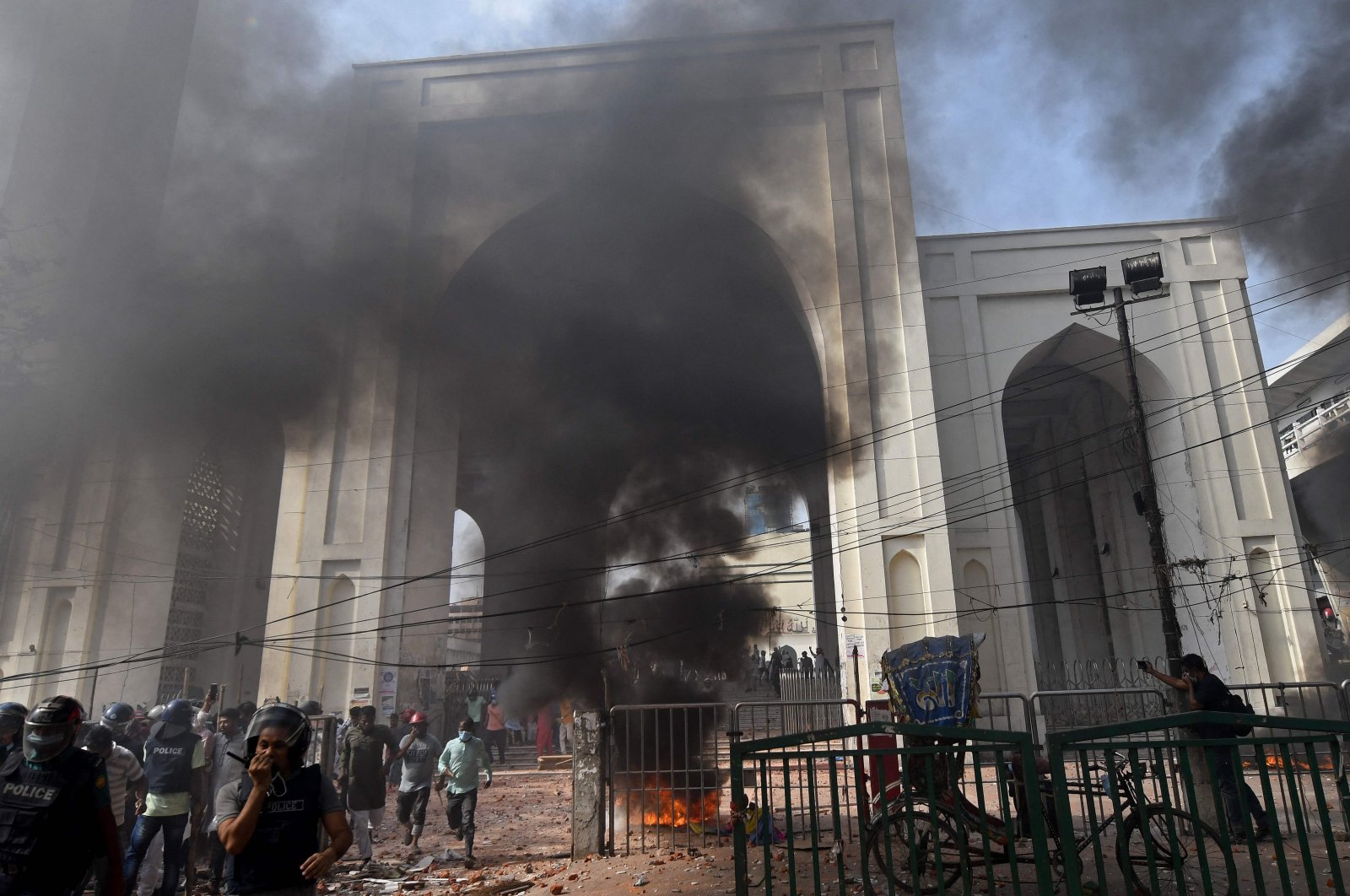 Activists set a motorcycle on fire during a clash with the police as they protest against the visit of Indian Prime Minister Narendra Modi in Dhaka, Bangladesh, March 26, 2021. (AFP Photo)
by Agencies Mar 26, 2021 3:28 pm
RECOMMENDED

Police said four bodies of members of the Hefazat-e-Islam group, one of the largest Islamic nonpolitical groups, were brought to Chittagong Medical College Hospital after violence erupted at Hathazari, a rural town where the group's main leaders are based.

"We got four bodies here. They are all hit with bullets. Three of them are madrasa students and another a tailor," Alauddin Talukder, a police inspector at the hospital, told Agence France-Presse (AFP). He did not say who opened fire at the demonstrations.

Modi arrived Friday in Bangladesh's capital to join celebrations marking 50 years of the country's independence, sparking protests at Dhaka's main mosque that were dispersed by police using tear gas and rubber bullets – injuring scores of people – after clashes broke out between groups of demonstrators, officials and witnesses said.

Modi's two-day visit, his first abroad since the coronavirus pandemic began last year, will include commemorating 100 years since the birth of Bangladeshi independence leader Sheikh Mujibur Rahman, the father of the current Prime Minister Sheikh Hasina.

Hasina, a key partner for India in maintaining regional stability, welcomed Modi at Hazrat Shahjalal International Airport in Dhaka on Friday morning. By Friday afternoon, hundreds of protesters had gathered outside the Baitul Mokarram mosque.

Witnesses said violent clashes broke out after one faction of protesters began waving their shoes as a sign of disrespect to Modi, and another group tried to stop them. Local media said the protesters who tried to stop the shoe-waving are aligned with the ruling Awami League party. The party criticized the other protest faction for attempting to create chaos in the country during Modi’s visit.

Local TV showed protesters throwing stones at the police, who were heavily present on the streets near the mosque. Somoy TV reported that at least 40 people were injured, including journalists, and were taken to the Dhaka Medical College Hospital for treatment.

Abdul Mazid, a businessperson who joined the prayer, told The Associated Press (AP) that he was trapped in the mosque after trying to flee when violence erupted during the prayer.

"I had a feeling that something was going to happen. I am still inside the mosque,” he said by phone. "There is huge violence, I can see from here."

A police official said members of several groups had joined the protests, but it was not immediately clear which groups they were representing. The official spoke on the condition of anonymity in line with regulations. He declined to give any figures for how many people were injured.

While Modi’s trip is mainly focused on Bangladesh's anniversary celebrations, the visit also has a political agenda at home, as voting begins Saturday in several state-level elections, including West Bengal, which borders Bangladesh.

With an eye on galvanizing Hindu support in the key battleground state, Modi is set to visit a Hindu temple outside Dhaka that’s sacred to the Matua community back in West Bengal.

The Matua sect’s vote is expected to determine the winner of at least seven seats in a close race for control of the state assembly. Modi, in a tweet late Thursday ahead of his trip, said the two countries share a vital relationship.

"Our partnership with Bangladesh is an important pillar of our Neighborhood First policy, and we are committed to further deepen and diversify it. We will continue to support Bangladesh's remarkable development journey, under Prime Minister Sheikh Hasina’s dynamic leadership,” he said.

In recent weeks, demonstrators have urged the Indian leader not to come to Bangladesh and chanted anti-India and anti-Modi slogans.

Student protesters called Modi "the butcher of Gujarat." Others carried signs reading "Go Back Modi, Go Back India,” and "Go Back Killer Modi.”

Modi was chief minister in the western state of Gujarat in 2002 when Hindu-Muslim riots left more than 1,000 people dead. Allegations that authorities allowed and even encouraged the bloodshed have long followed Modi, who has repeatedly denied having any role.

The protesters also criticized Hasina for inviting Modi, saying the two countries have many unresolved disputes. The protesters accuse Modi and his Hindu nationalist party of discriminating against Muslims, such as a controversial 2019 amendment to the citizenship law.

They've also criticized the killings of Bangladeshis by Indian border guards. India says such casualties happen when Bangladeshis are involved in cross-border smuggling and attempt to cross the border illegally.