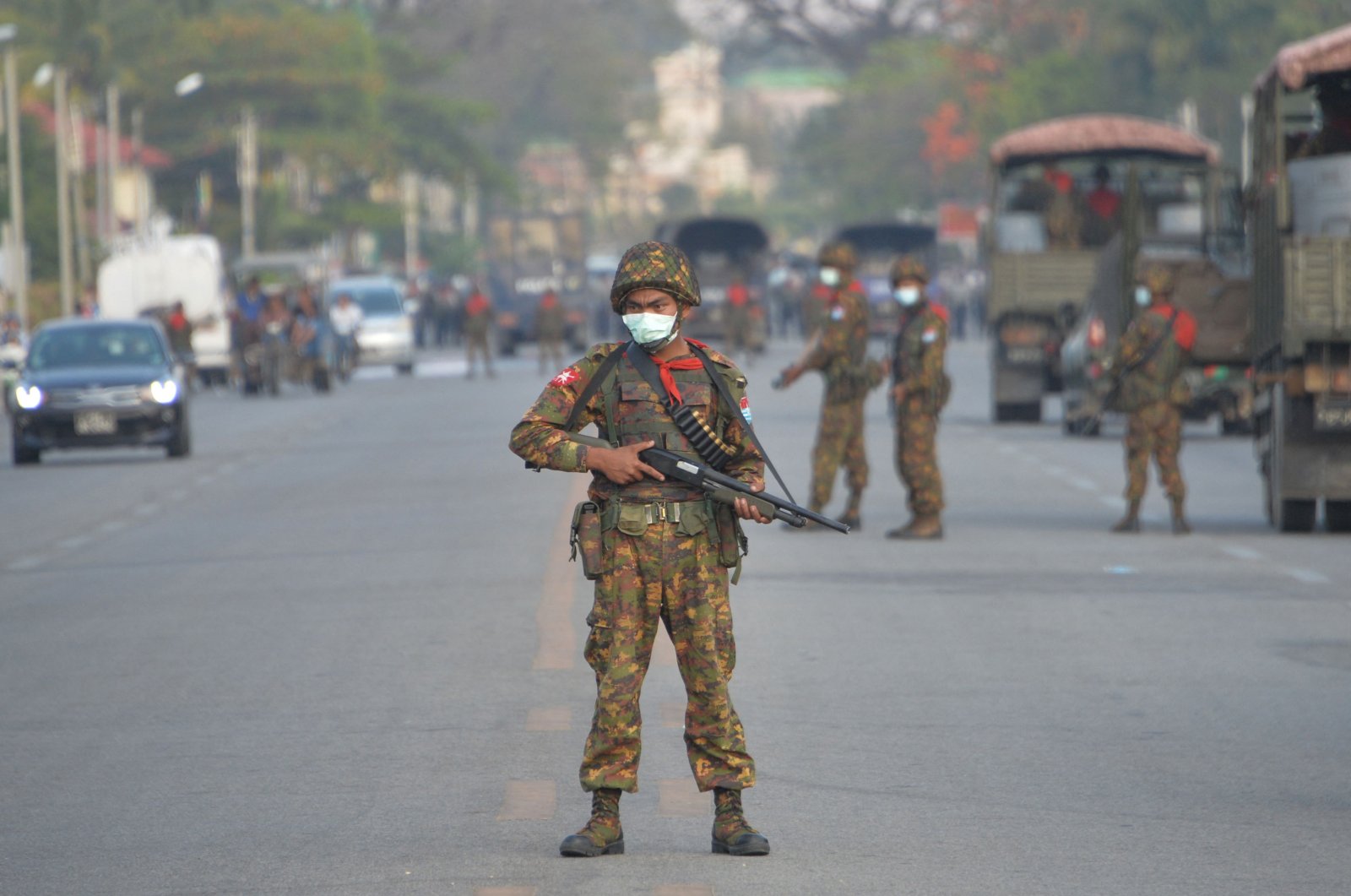 A Myanmar soldier stands guard on a road amid demonstrations against the military coup in Naypyidaw on Feb. 17, 2021. (AFP Photo)
by Agencies Mar 11, 2021 9:05 am
RECOMMENDED

The military junta in Myanmar is deliberately using lethal weapons against participants in peaceful protests, according to investigations by human rights activists.

"Many of the killings documented amount to extrajudicial executions," Amnesty International said on Thursday, citing analysis of 50 videos.

The research also revealed that some of the military units Amnesty had accused in the past of war crimes and crimes against humanity were now being used against protesters, the rights organization said.

"Footage clearly shows that Myanmar military troops - also known as the Tatmadaw - are increasingly armed with weapons that are only appropriate for the battlefield, not for policing actions," Amnesty said, according to remarks carried by the Deutsche Presse-Agentur (DPA). Among other things, they were firing indiscriminately with live ammunition in urban areas, it said.

"These Myanmar military tactics are far from new, but their killing sprees have never before been livestreamed for the world to see," said Joanne Mariner, director of crisis response at Amnesty International.

In a statement issued after a meeting in New York, the United Nations Security Council (UNSC) strongly condemned "the violence against peaceful protestors, including against women, youth and children." The UNSC urged Myanmar's military "to exercise utmost restraint."

The council also expressed its continued support for the democratic transition in Myanmar and stressed the need to uphold democratic institutions and processes, refrain from violence, fully respect human rights and fundamental freedoms and uphold the rule of law.

Mass protests have been ongoing since the military in Myanmar overthrew the government in early February. Security forces in the country have been cracking down on protesters with increasing ferocity since the coup, now more than five weeks ago. It is estimated that more than 60 people have already been killed.

According to Reuters, six more people were killed in the central town of Myaing when forces fired on a protest, a man who took part in the demonstration and helped carry bodies to hospital told Reuters by telephone Thursday. A health worker there confirmed all six deaths. One person was killed in the North Dagon district of the biggest city of Yangon, domestic media said. Photographs posted on Facebook showed a man lying prone on the street, bleeding from a head wound. One death was reported in Mandalay.

The military, which has defended its takeover by citing voting irregularities in November elections won by Suu Kyi's party, held a rare news conference Thursday accusing Suu Kyi of corruption.

In the capital Naypyidaw, junta spokesperson Zaw Min Tun said the detained chief minister of Yangon had admitted giving Suu Kyi $600,000 in cash, along with more than 11 kilograms ($680,000 worth) of gold.

"We have learned Daw Aung San Suu Kyi herself took this $600,000 and seven visses (11.2 kilograms) of gold. The anti-corruption commission is investigating," Zaw Min Tun said.