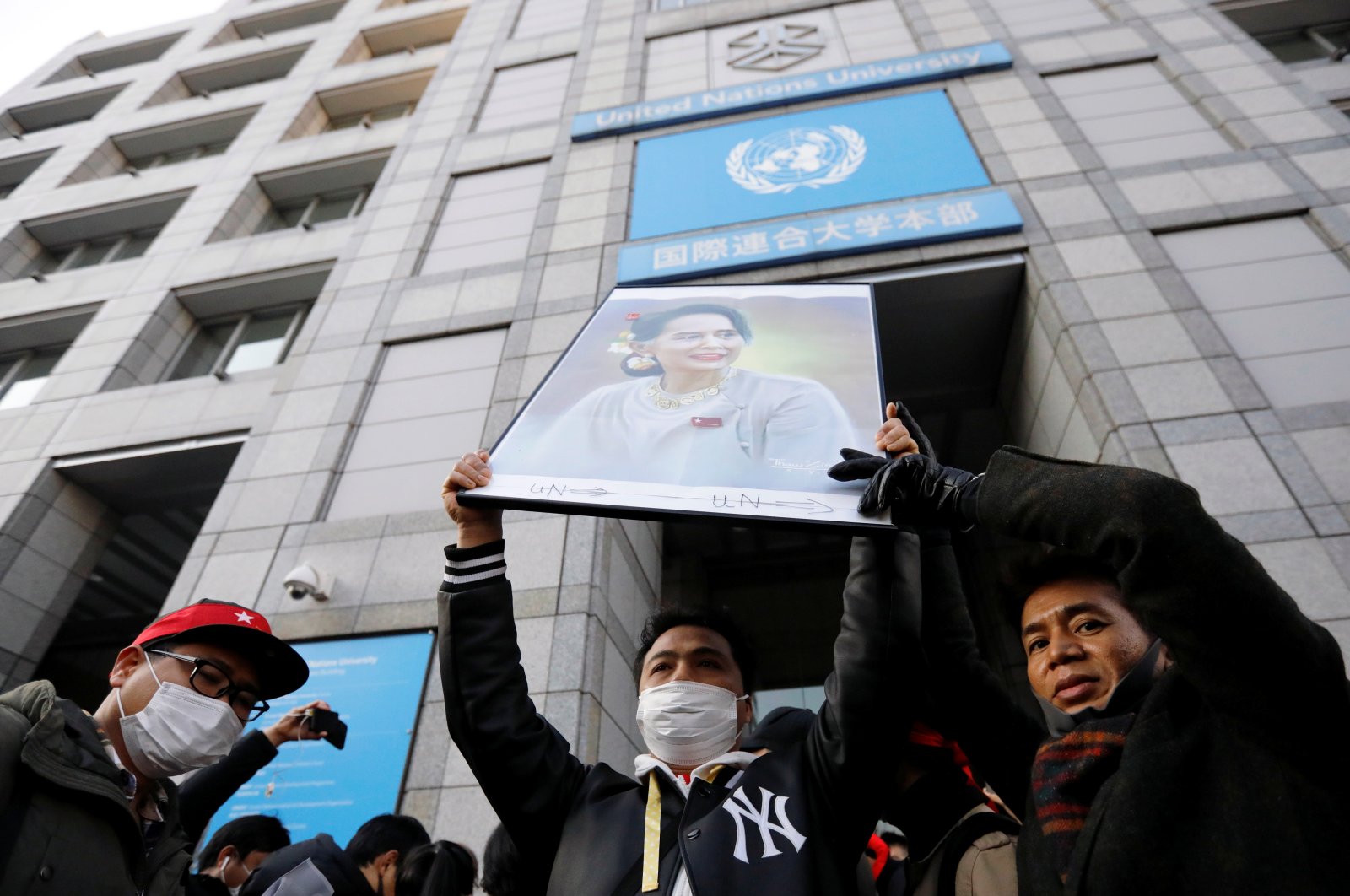 Protesters from Myanmar residing in Japan hold a portrait of leader Aung San Suu Kyi at a rally against Myanmar's military after it seized power from a democratically elected civilian government and arrested Suu Kyi, at United Nations University in Tokyo, Japan, Feb. 1, 2021. (Reuters Photo)
by Agencies Feb 01, 2021 9:48 am

The Myanmar military staged a coup on Monday, arresting the country’s senior politicians, including Nobel laureate Aung San Suu Kyi, taking control for one year, while states across the world denounced the move and called for the restoration of democracy

Myanmar's military seized power on Monday in a coup against the democratically elected government of Aung San Suu Kyi, who was detained along with other leaders of her National League for Democracy (NLD) party in early morning raids.

An announcement read on military-owned Myawaddy TV cited a section of the military-drafted constitution that allows the military to take control in times of national emergency. It said the reason for the takeover was in part due to the government’s failure to act on the military’s claims of voter fraud in last November’s election and its failure to postpone the election because of the coronavirus crisis.

The announcement and the declaration of a state of emergency follow days of concern about the threat of a military coup – and military denials that it would stage one – and came on the morning the country’s new Parliament session was to begin.

The takeover is a sharp reversal of the partial yet significant progress toward democracy Myanmar made in recent years following five decades of military rule and international isolation that began in 1962. It would also be a shocking fall from power for Suu Kyi, who led the democracy struggle despite years under house arrest and won a Nobel Peace Prize for her efforts.

Suu Kyi’s NLD released a statement on one of its Facebook pages Monday saying the military’s actions were unjustified and went against the constitution and the will of voters. The statement urged people to oppose Monday’s “coup” and any return to “military dictatorship.” It was not possible to confirm who posted the message as NLD members were not answering phone calls.

The detention of the politicians and cuts in television signals and communication services on Monday were the first signs that plans to seize power were in motion. Phone and internet access to Naypyitaw was lost and Suu Kyi’s party could not be reached. Phone service in other parts of the country was also reported down, though people were still able to use the internet in many areas.

The Irrawaddy, an established online news service, reported that Suu Kyi, who as state counselor is the nation’s top leader, and the country’s president, Win Myint, were both detained in the predawn hours. It cited Myo Nyunt, a spokesperson for the NLD.

The report said that the party’s Central Executive Committee members, lawmakers and regional Cabinet members had also been taken into custody.

A list of other people believed to have been detained, compiled by political activists, included filmmaker Min Htin Ko Ko Gyi, writer Maung Thar Cho, and prominent veterans of the country’s 1988 student protest movement, such as Ko Ko Gyi and Min Ko Naing. Their detention could not immediately be confirmed.

The military TV report said Commander-in-Chief Senior Gen. Min Aung Hlaing would be in charge of the country, while Vice President Myint Swe would be elevated to acting president. Min Aung Hlaing is an international pariah who has been condemned for presiding over a brutal crackdown on the country's stateless Rohingya population in 2017. According to Agence France-Presse (AFP), he has been banned from Facebook for stoking hate speech against the persecuted minority, and U.N. investigators have called on him and other top army leaders to be prosecuted for genocide. But for years, he has steadfastly denied nearly all allegations of human rights abuses and says the military operations, which drove around 750,000 Rohingya refugees into Bangladesh, were justified to root out insurgents.

In a later announcement, the military said an election would be held in a year and the military would hand power over to the winner.

As word of the military’s actions spread in Yangon, the country’s biggest city, there was a growing sense of unease among residents who earlier in the day had still been packed into cafes for breakfast and had been doing their morning shopping.

People were removing the bright red flags of Suu Kyi’s party that once adorned their homes and businesses. Lines formed at ATMs as people waited to take out cash, efforts that were being complicated by internet disruptions. Workers at some businesses decided to go home.

The military maintains its actions are legally justified, though Suu Kyi’s party spokesperson as well as many international observers have said it is in effect a coup.

The 2008 constitution, implemented during military rule, has a clause that says in cases of national emergency, the president in coordination with the military-dominated National Defense and Security Council can issue an emergency decree to hand over the government’s executive, legislative and judicial powers to the military commander-in-chief.

The clause had been described by New York-based Human Rights Watch (HRW) as a “coup mechanism in waiting.”

It is just one of many parts of the charter that ensured the military could maintain ultimate control over the country at the expense of elected politicians. The military also was guaranteed 25% of seats in Parliament and control of several key ministries, especially those involved in security and defense.

The 75-year-old Suu Kyi is by far the country’s most popular politician and became the country’s de facto leader after her party won the 2015 elections, though the constitution barred her from being president. She had been a fierce antagonist of the army during her time under house arrest.

Nevertheless, once in power Suu Kyi had to balance her relationship with the country’s generals and even went on the international stage to defend their crackdown on Rohingya Muslims in the country’s west, a campaign the U.S. and others have labeled genocide. That has left her reputation internationally in tatters.

She remains wildly popular at home, where most supported the campaign against the Rohingya. Suu Kyi’s party captured 396 out of 476 seats in the combined lower and upper houses of Parliament in November’s polls. The military has charged that there was massive voting fraud in the election, though it has failed to provide proof. The state Union Election Commission last week rejected its allegations.

The military’s actions were already receiving international condemnation, with many governments and global institutions urging the military to respect the vote.

“We call on Burmese military leaders to release all government officials and civil society leaders and respect the will of the people of Burma as expressed in democratic elections,” he wrote, using Myanmar’s former name. "The United States stands with the people of Burma in their aspirations for democracy, freedom, peace and development. The military must reverse these actions immediately."

United Nations Secretary-General Antonio Guterres condemned the detention of Suu Kyi, President Win Myint and other political leaders and expressed "grave concern" at the transfer of powers to the military.

"These developments represent a serious blow to democratic reforms in Myanmar," a statement from Guterres' spokesperson read, according to Reuters. "The secretary-general urges the military leadership to respect the will of the people of Myanmar and adhere to democratic norms, with any differences to be resolved through peaceful dialogue."

European Council President Charles Michel said the "outcome of the elections has to be respected and democratic process needs to be restored."

Turkey’s Foreign Ministry also denounced the Myanmar military for carrying out a coup d'etat while urging military authorities to release all politicians and civilians detained as part of the takeover. In a statement released Monday, the ministry said Turkey opposes all types of coups and military interventions.

The statement continued by saying that Turkey expects the military to "immediately" release all politicians and civilians being detained and the lifting of all obstacles for elected officials and democratic institutions, as well as convening a new parliament elected by the people.

"We hope that this grave development does not further deteriorate the situation of Rohingya Muslims living in dire conditions in Myanmar," the ministry added.

Turkey's Embassy in the Southeast Asian country warned Turkish citizens Monday not to venture outdoors or travel unless necessary.

Japan, which has close ties with Myanmar as Tokyo has been a major donor of aid for many years, and scores of firms engaged in business activities there also have called on the military to release San Kyi.

"We are concerned about the state of emergency issued in Myanmar, which damages the democratic process, and call for the release of Aung San Suu Kyi and others who were detained," chief Cabinet secretary Katsunobu Kato told a news conference.

"The Japanese government has long been a strong supporter of the democratic process in Myanmar and opposes any situation that reverses it," he added. "Our nation strongly calls on the military to promptly restore democracy."

As part of efforts to contain the growing influence of China in the South China Sea and the Indian Ocean, Japan has been focusing on "capacity-building support" with ASEAN (Association of Southeast Asian Nations) countries in its security strategy over recent years. This has included strengthening relations between defense authorities with the Myanmar military as well. But Japan may now be forced to rethink this, said a ruling party lawmaker familiar with Japanese defense policy, declining to be named due to the sensitivity of the issue.

"We have been persistent in developing mutually beneficial relations with Myanmar and have been working with Myanmar for the voluntary, safe and sustained repatriation of the Rohingya sheltered in Bangladesh," the Ministry of Foreign Affairs told Reuters in a statement. "We expect these processes to continue in right earnest."

Mainly Muslim Bangladesh has sheltered 1 million Rohingya who had fled violence in Buddhist-majority Myanmar, where most of them are denied citizenship. A U.N.-backed repatriation process has failed to take off despite multiple attempts from Bangladesh, which has now started sending some refugees to an isolated island in the Bay of Bengal.

Myanmar's leader failed to stop the forced expulsion of hundreds of thousands of Rohingya from western Rakhine State. Nevertheless, Rohingya in Bangladesh expressed fears for their people still in Myanmar following the military's ouster of Suu Kyi.

"We, the Rohingya community, strongly condemn this heinous attempt to kill democracy," Rohingya leader Dil Mohammed told Reuters by phone. "We urge the global community to come forward and restore democracy at any cost."