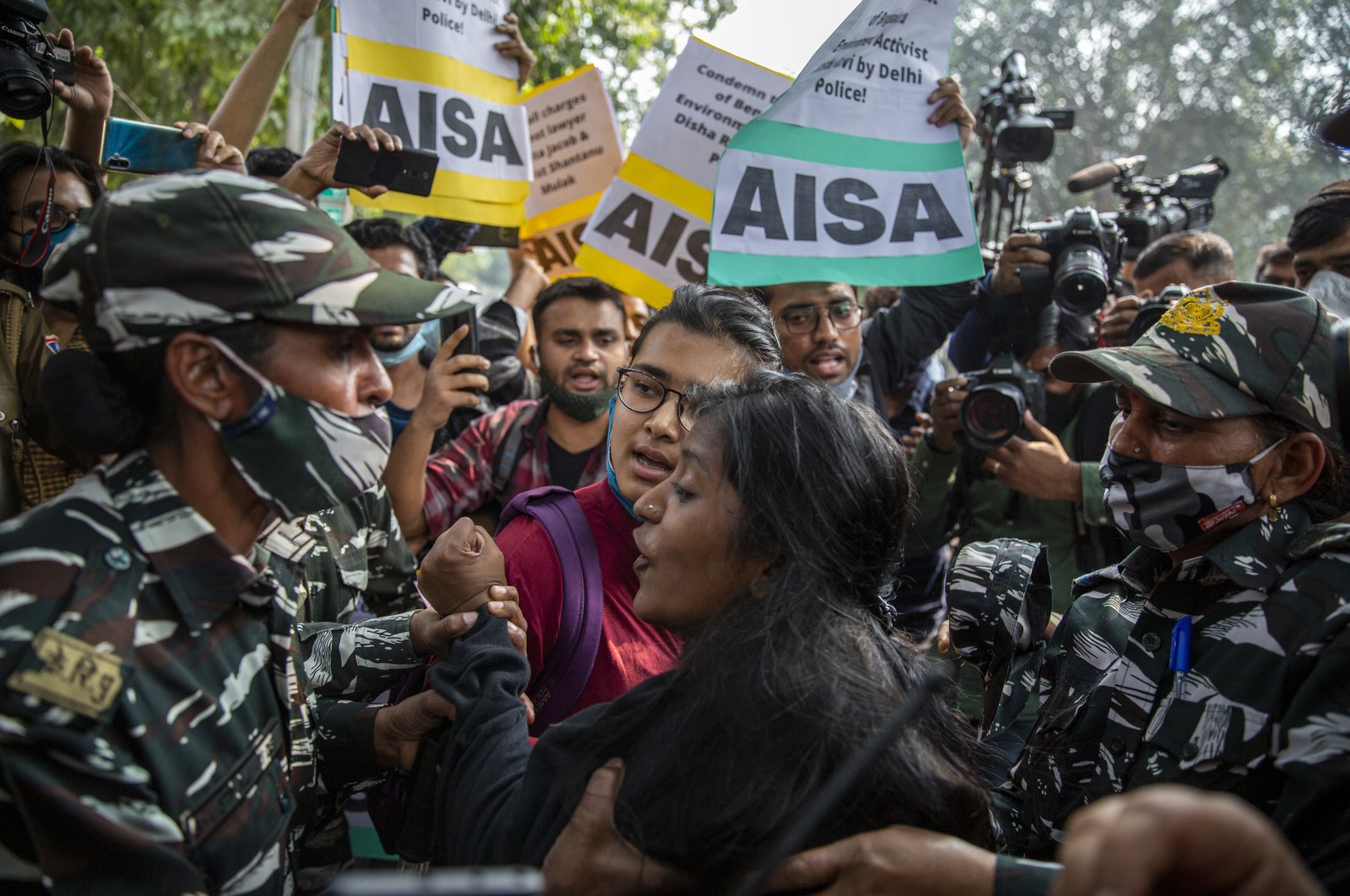 India's crackdown on dissidents, opposition, activists and protestors has come under the spotlight in the country after Disha Ravi, a 22-year-old Indian climate activist, was charged with sedition by the police, a colonial-era law that carries a sentence up to life in prison, for sharing an online handbook meant to raise support for the monthslong farmer protests on Twitter.

"If highlighting farmers’ protest globally is sedition, I am better (off) in jail,” she said in court two weeks ago. She was released after 10 days in custody. Her mother told reporters in Ravi’s hometown of Bengaluru that the case "has reinforced our faith in the system,” and called her daughter strong and brave.

Going after activists isn’t new in India, but Ravi's saga has stoked fear and anxiety. Observers say what happened to Ravi, a young, middle class, urban woman, hit home for a lot of Indians, who suddenly feared they could be jailed for sharing something on social media.

Criminal lawyers also point to a troubling frequency in the way sedition is invoked. Many say checks and balances employed by lower courts, often overwhelmed with cases, are fading. The incident has raised questions over India’s democracy, with critics decrying it as the latest attempt by Prime Minister Narendra Modi’s Hindu nationalist government to mute dissent and criminalize it.

"They targeted someone not usually targeted by the Hindu right-wing - a young girl from South India, who doesn’t have a Muslim name and is not linked to left-wing student politics,” said prominent historian Ramachandra Guha. "The message they wanted to send is that they can go after anyone."

Earlier in February, Ravi, part of the Indian wing of Fridays for Future, a global climate change movement founded by Greta Thunberg, was charged with sedition for allegedly compiling and editing a Google document that explains how to carry out a social media campaign. It aimed to help farmers, camped outside New Delhi since November, amplify protests that have convulsed India, posing one of Modi's biggest challenges.

The farmers, a majority of whom are from the northern states of Punjab and Haryana, want a repeal of laws passed last year that they say will favor large corporate farms and devastate their income. The government says the laws are necessary to modernize Indian agriculture. Many of the protesters are from India’s minority Sikh religion, but their grievances are rooted in economic issues, not religious ones.

Police say the document Ravi shared spread misinformation, "tarnished the image of India,” and may have incited the farmers to turn violent on Jan. 26, when clashes with police left hundreds injured and one protester dead. Modi’s government has increasingly brandished sedition against critics, intellectuals, activists, filmmakers, students and journalists, with police arguing that words or actions of dissent make them a threat to national security.

Even though convictions remain rare, police do not need an arrest warrant, making it an easy law to invoke, said Chitranshul Sinha, a lawyer who has written a book on the history of sedition law. An accused person is often in custody until the case is taken up by a high court, since many lower courts are not empowered to dismiss such cases, he said.

The case has left a chilling effect on activists, with some spotlighting a culture of intimidation that runs deep, sometimes even before an arrest is made. Mukund Gowda, a 25-year-old public works activist and youth leader for the opposition Aam Aadmi Party in Bengaluru, was questioned by local police for almost a full day last year after he wrote a letter to the prime minister’s office to draw attention to a faulty road in his neighborhood and called out his local representatives for not taking action.

He shared the letter on his social media, which quickly went viral and landed him inside a police station, he said. "They (the police) tried to scare me, saying they could charge me with sedition,” Gowda said. He was let go. Police said his actions were "politically motivated” but denied threatening him. The experience made him and his family anxious. He stopped posting on social media and took a step back from activism for a few months.

Another activist, Tara Krishnaswamy, said peaceful demonstrators are sometimes questioned by police even when partaking in small-scale civic protests in Bengaluru. "The intimidation comes in many forms. The data for activists arrested doesn’t show the full picture - it’s much more pervasive,” she said.

Washington-based Freedom House last week downgraded India from "free” to "partly free” in its annual democracy survey. The drop reflects "a multiyear pattern in which the Hindu nationalist government and its allies have presided over rising violence and discriminatory policies affecting the Muslim population and pursued a crackdown on expressions of dissent by the media, academics, civil society groups, and protesters,” it said in a report.

The report also underscored how colonial-era laws are being continuously invoked to punish criticism by ordinary citizens. The government called the report "misleading, incorrect and misplaced.” The use of sedition is the responsibility of state governments and their authorities trying to preserve "public order," it said. The government "attaches highest importance to the safety and security of all residents of the country, including journalists."

According to Guha, the historian, India's democracy is in its worst state since the Emergency in the 1970s, when then-Prime Minister Indira Gandhi suspended elections, curbed civil rights, jailed political opponents and censored the press.

He said that previous governments have also tried to control independent institutions, but that "a recovery, even a partial one” always followed. "I fear that this time our democratic traditions may not be able to recover from this assault,” Guha said.