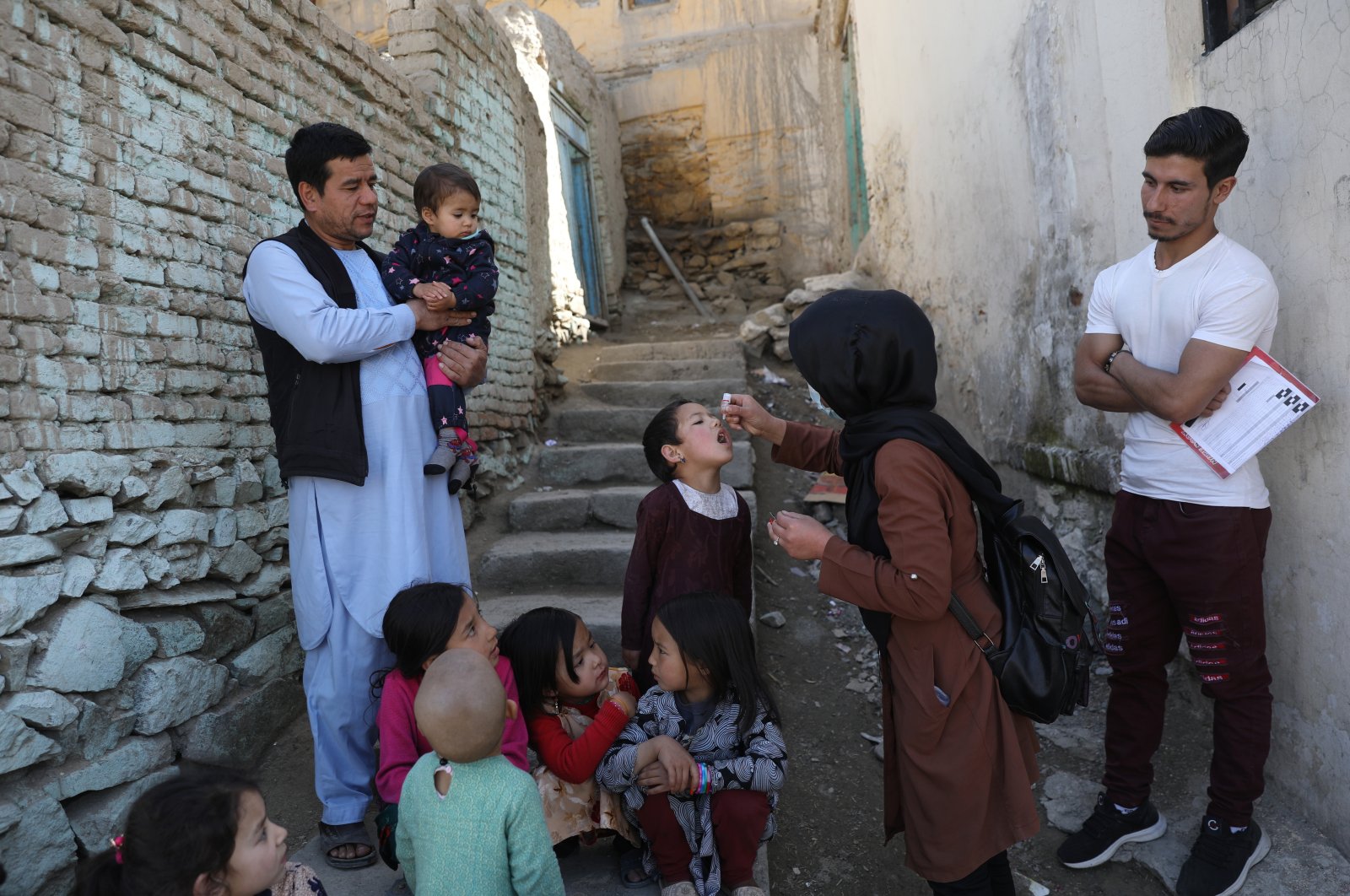 Shabana Maani, a volunteer polio vaccinator, gives a polio vaccination to a child in the old part of Kabul, Afghanistan, March 29, 2021. (AP Photo)
by Associated Press Apr 08, 2021 9:14 am
RECOMMENDED

Afghanistan, a country in turmoil, has been trying to inoculate millions of children against polio but the recent killing of three female vaccinators has put the country's campaign in doubt. However, brave women of the country remain determined to continue efforts in the face of danger and violence.

Unknown gunmen shot vaccination workers at two separate locations in the eastern city of Jalalabad on March 30 killing two volunteers and one supervisor in the polio immunization program, all of them women, as they carried out door-to-door vaccinations.

It was the first time that vaccination workers have been killed in a decade of door-to-door inoculations against the children’s disease in Afghanistan. Such attacks have been more common in neighboring Pakistan, where at least 70 vaccinators and security personnel connected to vaccination campaigns have been killed since 2011.

Afghanistan and Pakistan, which also started a vaccination program last month, are the only two countries in the world where polio is still endemic, and both have seen a disturbing increase in cases in recent years. In Afghanistan, 56 new cases were reported in 2020, the highest number since 2011, when 80 cases were registered.

Adela Mohammadi, a 21-year-old vaccination worker in Kabul, said her parents didn’t want her to go out to do inoculations on the day after the three women were killed in Jalalabad. "I went, but with a lot of worry,” she told The Associated Press.

"I was thinking what if someone was waiting for us and suddenly started shooting at us,” she said. “But at the end of the day, I love my job, I serve my people, especially children. Such attacks can’t stop us from what we are doing.”

In Pakistan, officials have struggled to overcome deep public suspicion over vaccines particularly since the U.S. used a fake vaccination campaign to unearth the hideout of al-Qaida leader Osama bin Laden. Hard-line clerics and militants have stoked the fears by depicting polio vaccinations as a Western plot to sterilize Muslim children.

In Afghanistan, some have also been suspicious of vaccinations, but that rarely if ever translated into violence. The new killings appear to reflect the disturbing rise in chaos in the past year when the country has seen increasing targeted killings, sometimes of professionals or civil society figures, sometimes just seemingly at random.

Daesh has claimed responsibility for some of the violence. However, the perpetrators of many attacks remain unknown, including the killings of the vaccination workers. The violence adds a new worry as Afghanistan struggles to stamp out a disease that has largely been eliminated around the world.

In children, polio can cause partial paralysis. Since 2010, the country has been carrying out regular inoculation campaigns in which workers go door to door, giving the vaccine to children. Most of the workers are women since they can get better access to mothers and children.

Last year, authorities had to call off four planned inoculation rounds because of lockdowns against the coronavirus pandemic, though they did manage to conduct two rounds. Authorities say nearly 10 million children are now in need of vaccination against polio. Of those, authorities are unable to reach some 3 million children living in areas under the control of Taliban insurgents.

One round of inoculations was carried out earlier this year, and a second was launched on March 29 and continued despite the killings the next day. During the four-day second round, more than 6 million children were vaccinated, according to Health Ministry Spokesperson Ghulam Dastagir Nazari.

In Afghanistan’s deeply conservative society, traumatized by decades of war, some are suspicious, viewing inoculations as a Western trick. Mohammadi has been participating in door-to-door campaigns for the past three years. She works in somewhat better-educated parts of the capital, and most families she approaches allow their children to be given a dose.

Public worries over the coronavirus and eagerness for treatment have made some more open to polio vaccinations, she said. Still, she regularly faces sometimes angry resistance from some families who claim vaccines are forbidden by religion or harm children.

"There are families who don’t even open their gates for us, they just shout, if we don’t leave, they will come out and beat us,” she said.

The continued impact of polio can be seen at the International Committee of the Red Cross’ Orthopedic Program in Afghanistan. It mainly provides artificial legs to the many wounded in war or by roadside bombs or mines. However, it also offers services to anyone with mobility issues, including people affected by polio.

In 2020, nearly 5,000 polio patients received treatment at the program, including physiotherapy, medical equipment and orthopedic devices. Maiwa Gul, 35, a polio patient from eastern Khost province, was at the center on a recent day getting repairs to the leg prostheses that he needs to walk.

He urged that all children be vaccinated. "Otherwise, they will eventually be in my position, needing someone to help them," he said. Merjan Rasekh, head of public awareness at the Health Ministry’s Polio Eradication Program, said the killing of the three vaccinators was "painful.”

"If this situation continues, it would definitely have a negative impact on the morale of our health workers,” he said, but the young women at the forefront of the vaccination drive said it must continue.

"If we are afraid and don’t go out to vaccinate, our children and all of us will face problems,” said 22-year-old Shabana Maani.