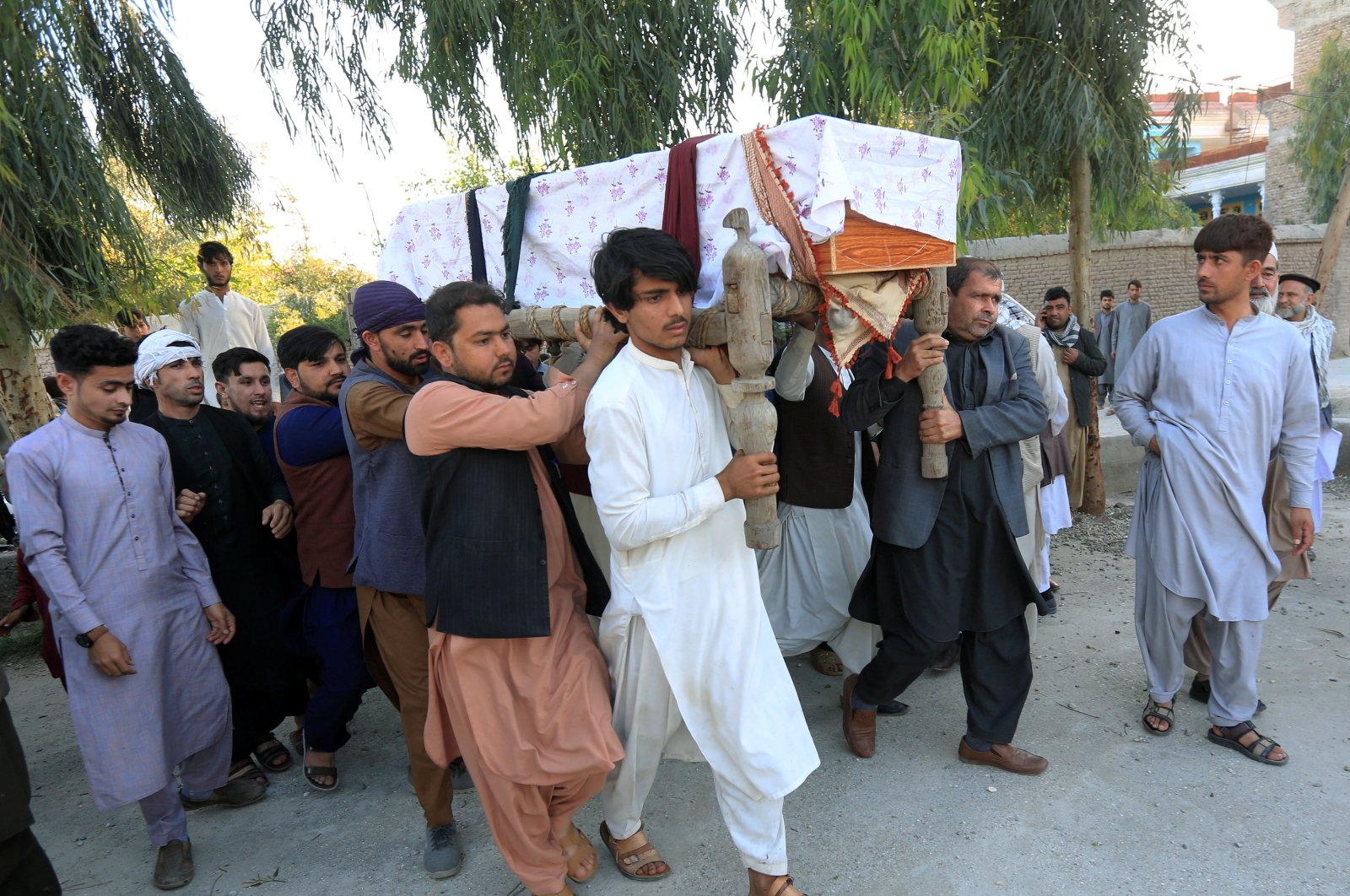 A group of people carry the coffin of one of three female polio vaccination health workers who were shot and killed by unknown gunmen, during a burial ceremony in Jalalabad, Afghanistan, March 30, 2021. (Reuters Photo)
by Reuters Apr 01, 2021 2:05 pm
RECOMMENDED

At a time when 10 million children in Afghanistan need polio drops, the killing of three female vaccination health workers in Jalalabad has put the country's door-to-door polio vaccination drive into doubt, pushing the government and aid agencies to re-assess field postings for thousands of female medics.

Officials at the United Nation Childrens' Fund (UNICEF), one of the agencies helping in the large-scale polio vaccination drive across Afghanistan that was launched this week, said they were reviewing the involvement of women in the role after unidentified gunmen killed three frontline workers in the eastern city of Jalalabad on Tuesday.

"We feel terrible to put female lives at risk and it's crucial to find ways to protect them before they participate in ongoing vaccination drives," said Godwin Mindra, an immunization specialist at UNICEF.

"We are considering providing a layer of security to female frontline workers but we are also aware that we cannot militarize any health campaign," Mindra told Reuters, adding that an estimated 9.9 million children need polio drops this year across the war-torn country.

About 70,000 staff, including vaccinators, are involved in implementing the polio campaign, of which about 40% are women.

Afghanistan's COVID-19 vaccination has not been affected since inoculations are being done at health centers and not door-to-door like the polio campaign, which exposes health workers to more danger, officials said.

They said scaling down the polio vaccinations would be catastrophic as the country this year reported about two dozen polio cases and about 3 million children were deprived of the vaccine in the past three years.

Female medics have been effective in implementing polio vaccine campaigns in conservative Afghan society as women in rural areas are reluctant to take their children to a male nurse due to cultural or religious issues.

Ghulam Dastagir Nazari, the head of the immunization program in the health ministry, said the motive behind targeting frontline female health workers remains unclear and he was re-assessing not just door-to-door campaigns but also protection to all health centers, where the COVID-19 vaccines are being administered.

"Our female employees can enter houses directly and even raise awareness about other health issues ... they secure financial independence but such attacks could force many to leave the job," he said.

Afghanistan and neighboring Pakistan which also recently started a vaccination drive, both Muslim-majority nations, are the only two countries of the world where polio remains endemic.

Last year, extremists in Pakistan's northwestern city of Peshawar spread rumors of children falling sick due to the vaccine, triggering a backlash in the conservative Khyber Pakhtunkhwa province bordering Afghanistan, where most of Pakistan's polio cases have been detected.

"The attack serves as a warning and we should take serious precautions and actions to prevent them in future," Nazari said, adding more young men could be hired to run the polio vaccine drive.

No militant group, including the Taliban, has taken responsibility for the latest attack. In recent years, followers of Daesh have been active in Nangarhar province, of which Jalalabad is the capital.

Families of the young medics killed said even women who step out of their homes for a noble cause are not safe in Nangarhar. "The gunmen shot my cousin in her forehead and fled," Faisal, a relative of 23-year-old Samina who was killed along with her colleagues this week, told Reuters.

"It was her second day as a vaccine provider and she has been killed in the line of duty," said Faisal, who uses a single name.