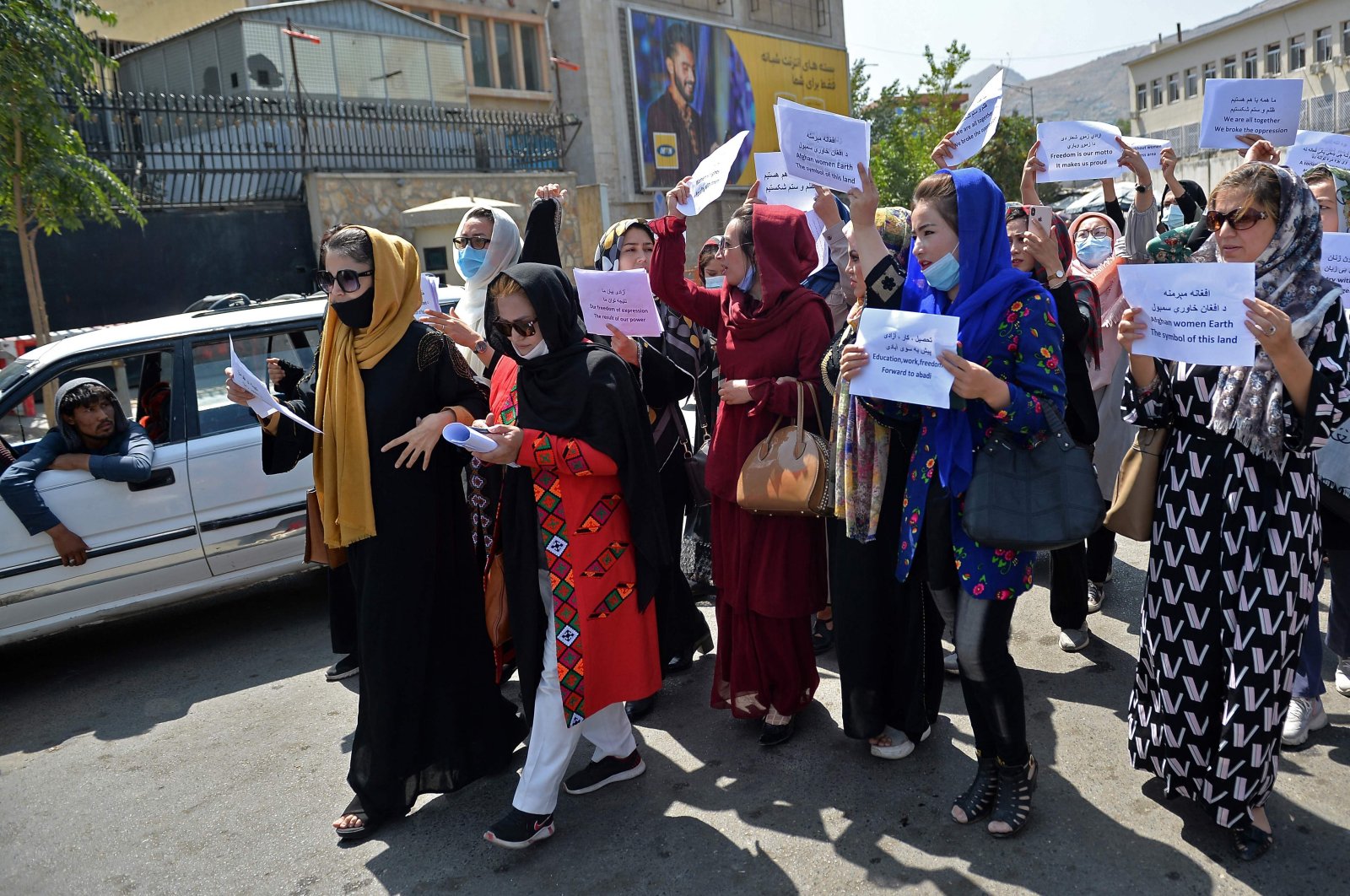 Afghan women take part in a protest march for their rights under the Taliban rule in the downtown area of Kabul, Afghanistan, Sept. 3, 2021. (AFP Photo)
by ASSOCIATED PRESS Sep 04, 2021 5:38 pm
RECOMMENDED

The protest march of women demanding equal rights in Afghanistan's capital Kabul came to an abrupt and frightening end when Taliban special forces fired their weapons into the air Saturday.

Also on Saturday, the chief of Pakistan’s powerful intelligence agency, which has an outsized influence on the Taliban, made a surprise visit to Kabul.

Taliban fighters quickly captured most of Afghanistan last month and celebrated the departure of the last U.S. forces after 20 years of war. The insurgent group must now govern a war-ravaged country that is heavily reliant on international aid.

The women's march – the second in as many days in Kabul – began peacefully. Demonstrators laid a wreath outside Afghanistan's Defense Ministry to honor Afghan soldiers who died fighting the Taliban before marching on to the presidential palace.

"We are here to gain human rights in Afghanistan,” said 20-year-old protester Maryam Naiby. "I love my country. I will always be here.”

As the protesters' shouts grew louder, several Taliban officials waded into the crowd to ask what they wanted to say.

Flanked by fellow demonstrators, Sudaba Kabiri, a 24-year-old university student, told her Taliban interlocutor that Islam's prophet gave women rights and they wanted theirs. The Taliban official promised women would be given their rights but the women, all in their early 20s, were skeptical.

As the demonstrators reached the presidential palace, a dozen Taliban special forces ran into the crowd, firing in the air and sending demonstrators fleeing. Kabiri, who spoke to The Associated Press (AP), said they also fired tear gas.

The Taliban have promised an inclusive government and a more moderate form of Islamic rule than when they last ruled the country from 1996 to 2001. But many Afghans, especially women, are deeply skeptical and fear a rollback of rights gained over the last two decades.

For much of the past two weeks, Taliban officials have been holding meetings among themselves, amid reports of differences among them emerging. Early on Saturday, neighboring Pakistan's powerful intelligence chief Gen. Faiez Hameed made a surprise visit to Kabul. It wasn’t immediately clear what he had to say to the Taliban leadership but the Pakistani intelligence service has a strong influence on the Taliban.

The Taliban leadership had its headquarters in Pakistan and were often said to be in direct contact with the powerful Inter-Services Intelligence agency. Although Pakistan routinely denied providing the Taliban military aid, the accusation was often made by the Afghan government and Washington.

Faiez's visit comes as the world waits to see what kind of government the Taliban will eventually announce, seeking one that is inclusive and ensures protection of women's rights and the country's minorities.

The Taliban have promised a broad-based government and have held talks with former President Hamid Karzai and the former government's negotiation chief Abdullah Abdullah. But the makeup of the new government is uncertain and it was unclear whether hardline ideologues among the Taliban will win the day – and whether the rollbacks feared by the demonstrating women will occur.

Taliban members whitewashed murals Saturday that promoted health care, warned of the dangers of HIV and even paid homage to some of Afghanistan’s iconic foreign contributors, like anthropologist Nancy Dupree, who singlehandedly chronicled Afghanistan’s rich cultural legacy. It was a worrying sign of attempts to erase reminders of the past 20 years.

The murals were replaced with slogans congratulating Afghans on their victory.

A Taliban cultural commission spokesperson, Ahmadullah Muttaqi, tweeted that the murals were painted over "because they are against our values. They were spoiling the minds of the mujahedeen and instead we wrote slogans that will be useful to everyone."

Meanwhile, the young female demonstrators said they have had to defy worried families to press ahead with their protests, even sneaking out of their homes to take their demands for equal rights to the new rulers.

Farhat Popalzai, another 24-year-old university student, said she wanted to be the voice of Afghanistan's voiceless women, those too afraid to come out on the street.

"I am the voice of the women who are unable to speak,” she said. "They think this is a man's country but it is not, it is a woman's country too.”

Popalzai and her fellow demonstrators are too young to remember the Taliban rule that ended in 2001 with the U.S.-led invasion. They say their fear is based on the stories they have heard of women not being allowed to go to school and work.

Naiby, the 20-year-old, has already operated a women's organization and is a spokesperson for Afghanistan's Paralympics. She reflected on the tens of thousands of Afghans who rushed to Kabul's Hamid Karzai International Airport to escape Afghanistan after the Taliban overran the capital on Aug. 15.

"They were afraid," but for her she said, the fight is in Afghanistan.