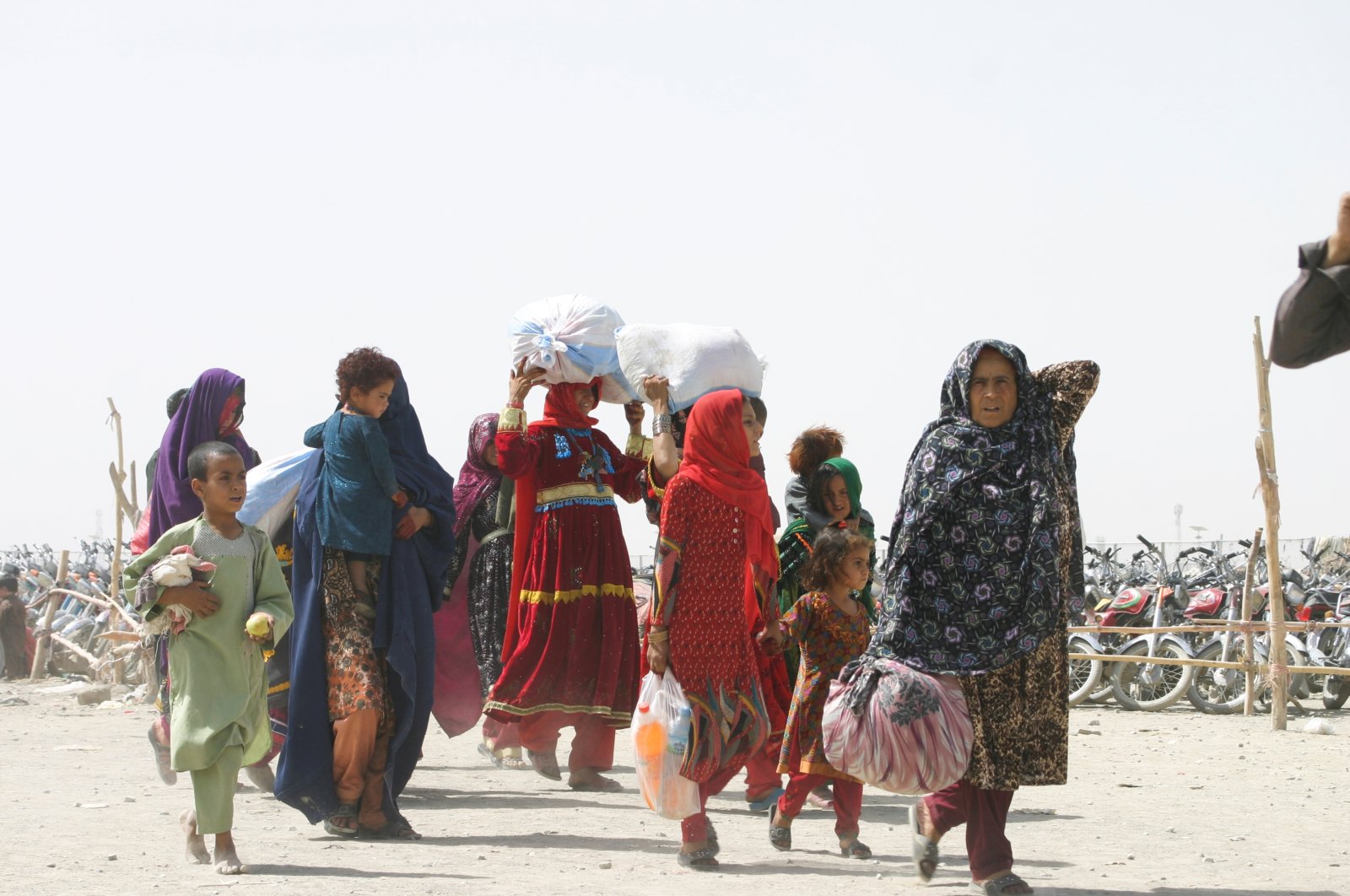 People from Afghanistan walk with their belongings as they cross into Pakistan at the "Friendship Gate" crossing point, in the Pakistan-Afghanistan border town of Chaman, Pakistan, Sept. 7, 2021. (Reuters Photo)
by Agencies Sep 10, 2021 8:11 am

The U.N. has warned that Afghanistan faces 'a humanitarian and development disaster' due to political instability, frozen foreign reserves and a tattered public finance system, urging the international community to find a way for money to flow into the war-torn country to prevent a complete collapse

Afghanistan is teetering on the brink of "universal poverty” that could become reality by the middle of next year unless urgent efforts are made to bolster local communities and their economies, the United Nations development agency said in a report released Thursday.

The report said the Taliban takeover of Afghanistan has put 20 years of steady economic gains at risk. The U.N. Development Programme (UNDP) outlined four scenarios for Afghanistan following the Taliban takeover that project the country’s GDP will decline between 3.6% and 13.2% in the next fiscal year starting in June 2022, depending on the intensity of the crisis and how much the world engages with the Taliban. That is in sharp contrast to the expected 4% growth in GDP before the Taliban assumed power for a second time on Aug. 15.

"Afghanistan pretty much faces universal poverty by the middle of next year,” Kanni Wignaraja, UNDP’s Asia-Pacific director, told a news conference launching its 28-page assessment. "That’s where we’re heading – it’s 97%-98% (poverty rate) no matter how you work these projections.”

Currently, Afghanistan's poverty rate stands at 72%. The UNDP pointed to many development gains over the last 20 years that are now at risk of being reversed: Per capita income more than doubled; life expectancy at birth was extended by about nine years, and the number of years of schooling rose from six to 10 with hundreds of thousands of girls getting an education denied under the Taliban's previous rule from 1996 to 2001.

Wignaraja said Afghanistan now faces "a humanitarian and development disaster” resulting from political instability, frozen foreign reserves, a collapsed public finance system, "a crush on local banking because of this,” as well as the impact of the COVID-19 pandemic.

The UNDP said Afghanistan’s foreign reserves now cover just one week of imports, which the country is heavily reliant on for oil, food and machinery. Abdallah Al Dardari, the UNDP’s representative in Afghanistan, said that by the time the Taliban took over, "the Afghan population was already on the brink of collapse economically and socially.” With universal poverty looming, he said, the most important thing is saving livelihoods, which can also save lives.

He said the UNDP has put together a package for local communities to support livelihoods, to support jobs for young men and women, and to reach households with disabled people and men and women over age 65. The UNDP also wants to make sure it reaches the 65,000 enterprises in Afghanistan owned by women, and that a million young men and women find jobs, he said. "All of this will reach about 9 million Afghans,” Al Dardari said in a video briefing from Istanbul.

"Most importantly, we preserve through this package 20 years of economic and social development in Afghanistan.” He also said, "70% and more of the Afghan economy is made up of informal activities and 70% of that sector is owned by women, and therefore we need to focus on women in Afghanistan to prevent poverty.”

Wignaraja said right now it’s the micro-businesses and small farmers that are keeping things going in Afghanistan. She was asked whether the Taliban had approved the package that UNDP is pursuing to prevent universal poverty.

"We have not yet had to ask for national permissions,” Wignaraja replied. "We have been allowed at the local level, as part of the U.N. development and humanitarian community, to get on with our work. And let’s hope that that continues because otherwise, the bottom is going to fall off.”

Meanwhile, the U.N. special envoy on Afghanistan Deborah Lyons said Thursday that Afghan staff of the United Nations has been increasingly subjected to harassment and intimidation since the Taliban came to power. Lyons told the Security Council that U.N. premises had largely been respected, although there were some exceptions.

"We are ... increasingly worried by the growing number of incidents of harassment and intimidation against our national staff. We will continue to do everything possible to support our staff and keep them from harm's way," Lyons said.

An internal U.N. security document seen by Reuters on Aug. 25 described dozens of incidents including veiled threats, the looting of U.N. offices and physical abuse of staff since Aug. 10, shortly before the Taliban swept to power.

"The U.N. cannot conduct its work – work that is so essential to the Afghan people – if its personnel are subjected to intimidation, fear for their lives, and cannot move freely," Lyons said Thursday.

While the militants have sought to reassure Afghans and Western powers that they will respect people's rights, reports of reprisals have undermined confidence.

"We are outraged at reports that members of the Taliban have engaged in reprisals against U.N. staff throughout the country. This is simply unacceptable," senior U.S. diplomat Jeffrey DeLaurentis told the Security Council. He called on the Taliban to respect the independence and neutrality of the U.N.

He also said the United States had heard reports that some female staff of the U.N. staff and U.S. aid partners had been prohibited from coming into the office or are being required to enter into their workplaces with a male chaperone.

"To call these reported incidents 'outrageous' would be an understatement. All U.N. staff members must be able to conduct their work without undue burden and without discrimination as to who they are," DeLaurentis said.

Lyons said that the Security Council has to find a way to get money flowing into the country “to prevent a total breakdown of the economy and social order.”

Fears were sparked not only for personnel but also for Afghanistan's heritage as the U.N.'s cultural agency asserted that everything was suspended at Bamiyan's cultural center that should have been completed last month, showcasing the remarkable heritage of a site that the Taliban desecrated two decades ago by dynamiting ancient statues of Buddha.

"Everything is suspended," said Philippe Delanghe, from UNESCO, the U.N.'s cultural agency, who said they are awaiting the decisions of the new regime.

Afghanistan once stood on the legendary Silk Road trade route, a crossroads of ancient civilizations. Now in the hands of the hardline Taliban, there are fears its heritage is at risk.

In March 2001, the Taliban spent weeks using dynamite and artillery to blow up two giant 1,500-year old statues of Buddha, carved into a cliff at Bamiyan, some 175 kilometers (78 miles) west of Kabul.

Many consider the wanton destruction to be among the world's worst cultural crimes. It was an act that brought the Taliban's ideology to global attention, just a few months before al-Qaida – who the Taliban hosted in Afghanistan – carried out the devastating 9/11 attacks on America.

"We judge by history, and 20 years ago there were terrible results," Ernesto Ottone, UNESCO's assistant director-general for culture, told Agence France-Presse (AFP).

In February, the Taliban said that Afghanistan's relics were part of the country's "history, identity and rich culture" and that "all have an obligation to robustly protect, monitor and preserve these artifacts."

Among Afghanistan's top sites are the Buddhist shrines at Mes Aynak, and the 12th-century Minaret of Jam, a UNESCO World Heritage site.

But since seizing power, the Taliban have said nothing more. There are worrying signs. In mid-August, residents in Bamiyan accused the Taliban of blowing up a statue honoring a Hazara leader – an ethnic group persecuted by the Taliban – who they had killed in the 1990s.

AFP could not confirm the reports, but social media images appeared to show a decapitated statue.

Philippe Marquis, director of the French Archaeological Delegation in Afghanistan (DAFA), told AFP he remains cautious about what will happen.

"We have no declarations saying: 'We are going to destroy everything or erase everything from the non-Islamic past,'" he said. Since 2016, it has become a war crime to destroy cultural heritage sites.

Many are worried for the National Museum in Kabul, which survived being ransacked both during the 1992-1996 civil war that followed the Soviet military withdrawal, as well as under the Taliban's first regime, from 1996-2001. Some feared the prospect of mass looting, as happened following the conflicts in Iraq and Syria, where extremist fighters raised funds by selling ancient artifacts on the black market.

However, the Taliban's seizure of Kabul was achieved with barely a shot being fired, and the museum appears to have emerged unscathed.

Only a third of the thousands of priceless objects in Kabul's museum have been cataloged. Kabul museum director Mohammad Fahim Rahimi told The New York Times last month the Taliban had promised their protection. But he added he still has "great concern for the safety of our staff and our collection."