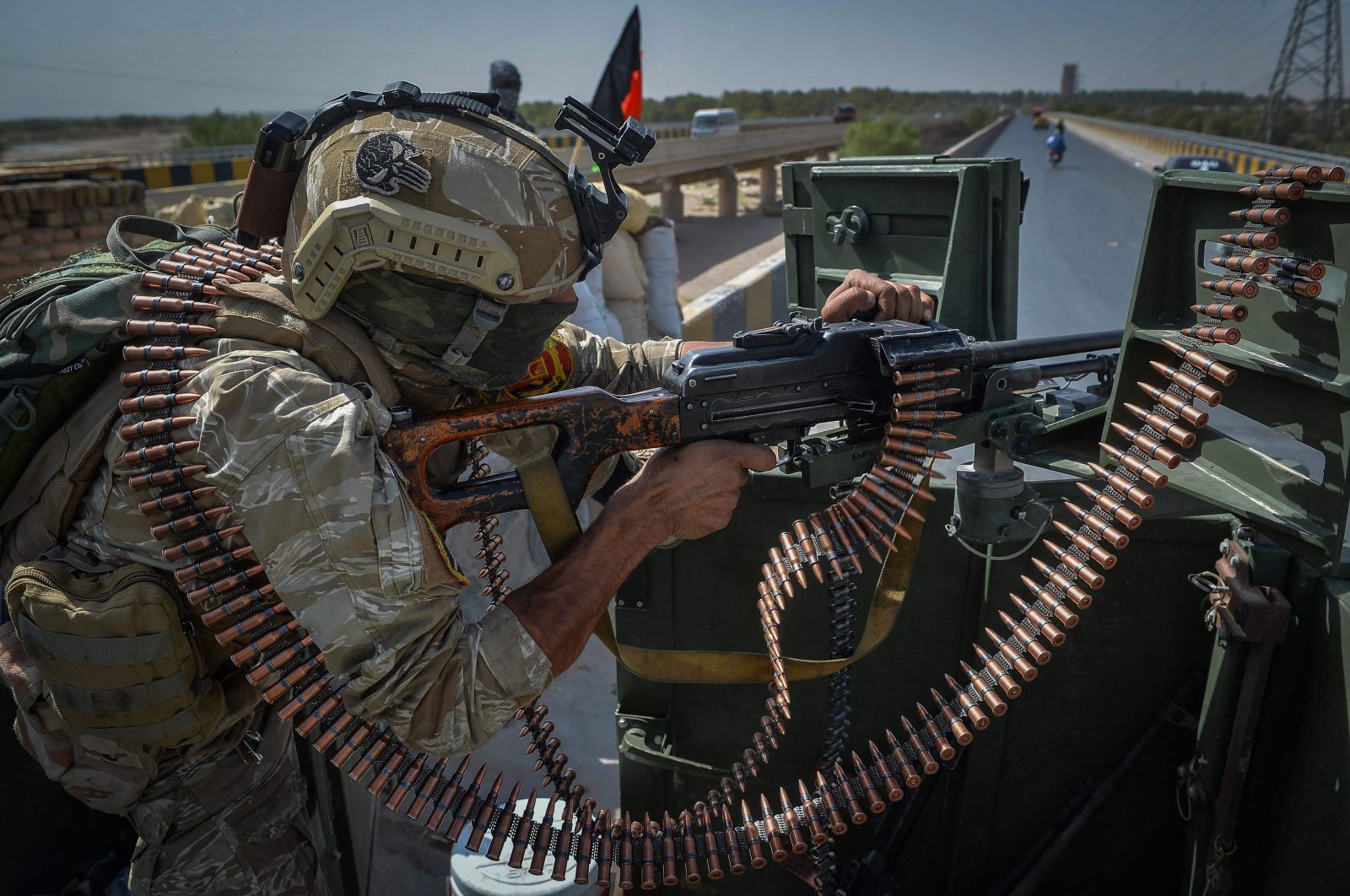 A member of the security forces stands guard on top of a vehicle outside the United Nations Assistance Mission in Afghanistan (UNAMA) office compound in Guzara district of Herat province, Afghanistan on July 31, 2021. (AFP Photo)
by Agencies
Aug 01, 2021 9:18 am

Afghan government forces struggled against Taliban assaults on several major cities Sunday as the insurgents stepped up a nationwide offensive that saw a key airport in the south come under rocket fire overnight.

Hundreds of commandos were deployed to the western city of Herat while authorities in the southern city of Lashkar Gah called for more troops to rein in the assaults.

Fighting has surged across the country in the months since early May when U.S.-led foreign forces began a final withdrawal from Afghanistan that is now almost complete.

After seizing large tracts of rural territory and capturing key border crossings, the Taliban have started to besiege provincial capitals.

Flights out of Kandahar, Afghanistan's second-largest city and the insurgents' former bastion, were halted after rockets struck the airport before dawn.

"Kandahar airport was targeted by us because the enemy were using it as a center to conduct airstrikes against us," Zabiullah Mujahid, a Taliban spokesperson, told Reuters. Afghan government officials said the rocket attacks forced authorities to suspend all flights and that the runway was partially damaged. There were no immediate reports of casualties, the officials said.

The facility is vital to maintaining the logistical and air support needed to keep the Taliban from overrunning the city, while also providing aerial cover for large tracts of southern Afghanistan.

The attack came as the Taliban inched closer to overrunning at least two other provincial capitals, including nearby Lashkar Gah in Helmand province.

"Fighting is going on inside the city and we have asked for special forces to be deployed in the city," Ataullah Afghan, head of Helmand provincial council, told Agence France-Presse (AFP).

Afghan security forces have increasingly relied on airstrikes to push the militants back from cities even as they run the risk of hitting civilians in heavily populated areas.

"The city is in the worst condition. I do not know what will happen," said Halim Karimi, a resident of Lashkar Gah, a city of 200,000 residents. "Neither the Taliban will have mercy on us, nor will the government will stop bombing."

Further west in the city of Herat, fighting continued on the city's outskirts overnight with airstrikes targeting Taliban positions. Herat provincial governor's spokesperson Jailani Farhad said that around 100 militant fighters had been killed in the attacks. Both the Taliban and government forces tend to exaggerate their claims of casualties inflicted on each other's forces and true counts are difficult to independently verify.

On Sunday, the Ministry of Defense said that hundreds of commandos had been sent to Herat to help beat back the insurgent assault.

"These forces will increase offensive operations and suppress the Taliban in Herat," the ministry tweeted.

For months, the Taliban's rapid territorial gains during the final stages of the U.S. military withdrawal have largely been in sparsely populated rural areas.

But in recent weeks they have brought increasing pressure on provincial capitals and seized key border crossings. The capture of any major urban center would take their current offensive to another level and fuel concerns that the army is incapable of resisting the Taliban's battlefield advances.

The government has repeatedly dismissed the militant's steady gains over the summer as lacking strategic value.

The Taliban have previously seized some cities but have managed to retain them only briefly. The insurgents overran Kunduz twice in 2015 and 2016, and briefly held control of Ghazni city after setting ablaze key government buildings and destroying telecommunication towers.

In recent weeks the Afghan government's air force, backed by the U.S. military, has provided Kabul with its biggest battlefield advantage over the Taliban and has so far largely kept the insurgents from overrunning urban areas.

Despite being in its final stages of withdrawal the U.S. military has also carried out airstrikes targeting the Taliban.

"The U.S. military has been engaged in a limited way, but in a significant one that has impact in meeting our obligations to defend Afghan forces when they are under attack," top U.S. envoy in Kabul Ross Wilson told reporters this week.