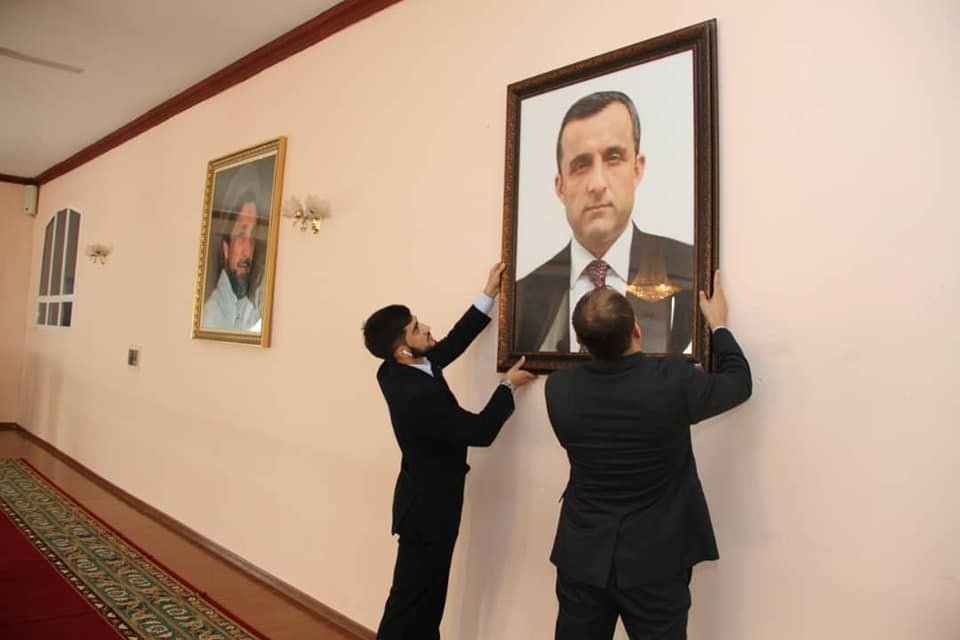 Afghan embassy staff hang a portrait of Afghan Vice President Amrullah Saleh, who declared himself the "legitimate caretaker president," on the wall at the embassy in Dushanbe, Tajikistan, in this picture released August 18, 2021. (Embassy of the Islamic Republic of Afghanistan in Dushanbe via Reuters)
by Agencies Aug 19, 2021 4:42 pm
RECOMMENDED

"The Taliban doesn't control the whole territory of Afghanistan," Lavrov told reporters at a press conference in Moscow following a meeting with his Libyan counterpart. "There are reports of the situation in the Panjshir Valley where the resistance of Afghanistan's vice president Mr. Saleh and Ahmad Massoud is concentrated," he said, as reported by Agence France-Presse (AFP).

Lavrov also reiterated his call for an inclusive dialogue involving all political players in Afghanistan for the formation of a "representative government."

The Panjshir Valley northeast of Kabul is Afghanistan's last remaining holdout. The valley is known for its natural defenses.

According to images shared on social media, Saleh and Massoud, the son of slain Northern Alliance leader Ahmed Shah Massoud, are pulling together a guerrilla movement to take on the Taliban.

Moscow has been cautiously optimistic about the new leadership in Kabul and is seeking contact with the militants in an effort to avoid instability spilling over to neighboring ex-Soviet states.

While the United States and other countries rushed to evacuate their citizens from Kabul, Russia said its embassy will continue to function.

Russian foreign ministry spokesperson Maria Zakharova told reporters on Thursday that the Taliban are "actively restoring order" and have demonstrated their "intent to dialogue."

She said at her weekly press briefing that the militant group – known for its severe treatment of women – is "ready to take into account the interest of citizens, including ... women's rights."

Earlier this week, Russia's ambassador to Afghanistan Dmitry Zhirnov met with the Taliban in Kabul, hailing on state television a "positive and constructive" meeting.

The Kremlin has in recent years reached out to the Taliban – which is banned as an "extremist" group in Russia – and hosted its representatives in Moscow several times, most recently last month.

Zakharova also said Thursday that Russia is ready to provide its civilian aircraft to fly Afghan citizens from Afghanistan to other countries.

"We are ready to offer the services of Russian civilian aviation to provide flights for any number of Afghan citizens. including women and children. to any foreign countries that show interest in receiving and accommodating them," Zakharova said at a news briefing. According to Reuters, she did not say anything about Russia taking in Afghans.