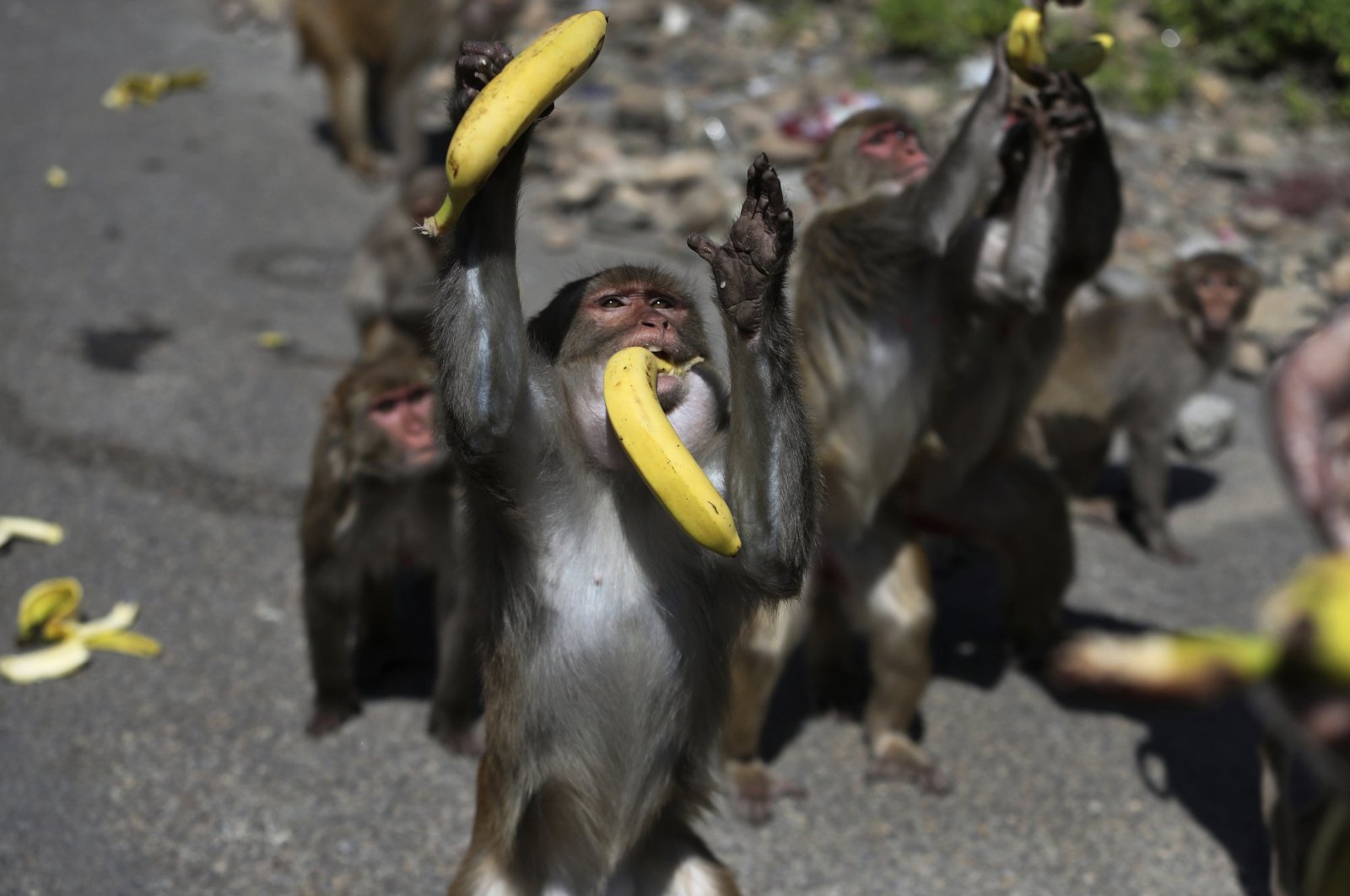 A monkey reaches out to grab bananas as a man feeds a group of monkeys during lockdown to prevent the spread of new coronavirus in Jammu, India, Wednesday, April 8, 2020. (AP Photo)
by French Press Agency - AFP Apr 08, 2020 4:16 pm
RECOMMENDED

Hundreds of monkeys have taken over the streets around India's presidential palace, leading an animal offensive taking advantage of deserted streets as the country remains under a coronavirus lockdown.

With India's 1.3 billion population and tens of millions of cars conspicuous by their absence, stray domestic animals and wildlife have moved to fill the void, while also suffering from the pandemic fallout.

In the financial capital Mumbai, peacocks have been seen perched on top of parked cars, displaying their spectacular trains.

In Delhi, troops of monkeys now scamper over the walls of the Rashtrapati Bhawan presidential compound, past military guards and into the grounds of ministries and other official buildings.

"They are stealing a lot more, but not yet threatening humans," said one officer on duty at the palace entrance.

The Rhesus macaque monkeys — who often snatch food from shoppers' bags — have long been a problem in the capital, but there have been reports of some getting into office buildings during the lockdown.

Other animals have also been emboldened by the coronavirus restrictions on humans, who are only allowed out for food and essential items.

A Himalayan black bear last week wandered into Gangtok, capital of the northeastern state of Sikkim, entering a telecoms office and injuring an engineer, media reported.

But the lockdown has also been deadly for some animals.

Some 115 horses, which make their living pulling carriages bedecked with flowers and balloons, were left to fend for themselves after the government ordered the shutdown, Sushmita Roy, spokeswoman for the Love and Care for Animals group told Agence France-Presse (AFP).

"They are becoming sick. We fear many more will die in the coming days if they do not get food," she said.

The owners of the carriages say they have no money for the horses after being ordered off the streets.

"We are finding it difficult to feed our family. How can we feed our horses?" said one owner, Sunny.

India's army of stray cows and dogs have also found new freedom to take over city intersections and forage in waste bins, but even those scraps have disappeared as restaurants and shops have closed.

Aditi Badam of the Posh Foundation in Noida, outside Delhi, said shelters like his were struggling to feed its animals and other strays during the lockdown.

Her foundation has been receiving increasing numbers of calls about abandoned dogs and pets, which he said had become a "major issue."

"It getting tougher day by day here," Badam told AFP, adding that strays near the office blocks of multinational companies and outsourcing firms in the city were starving as all had closed down.