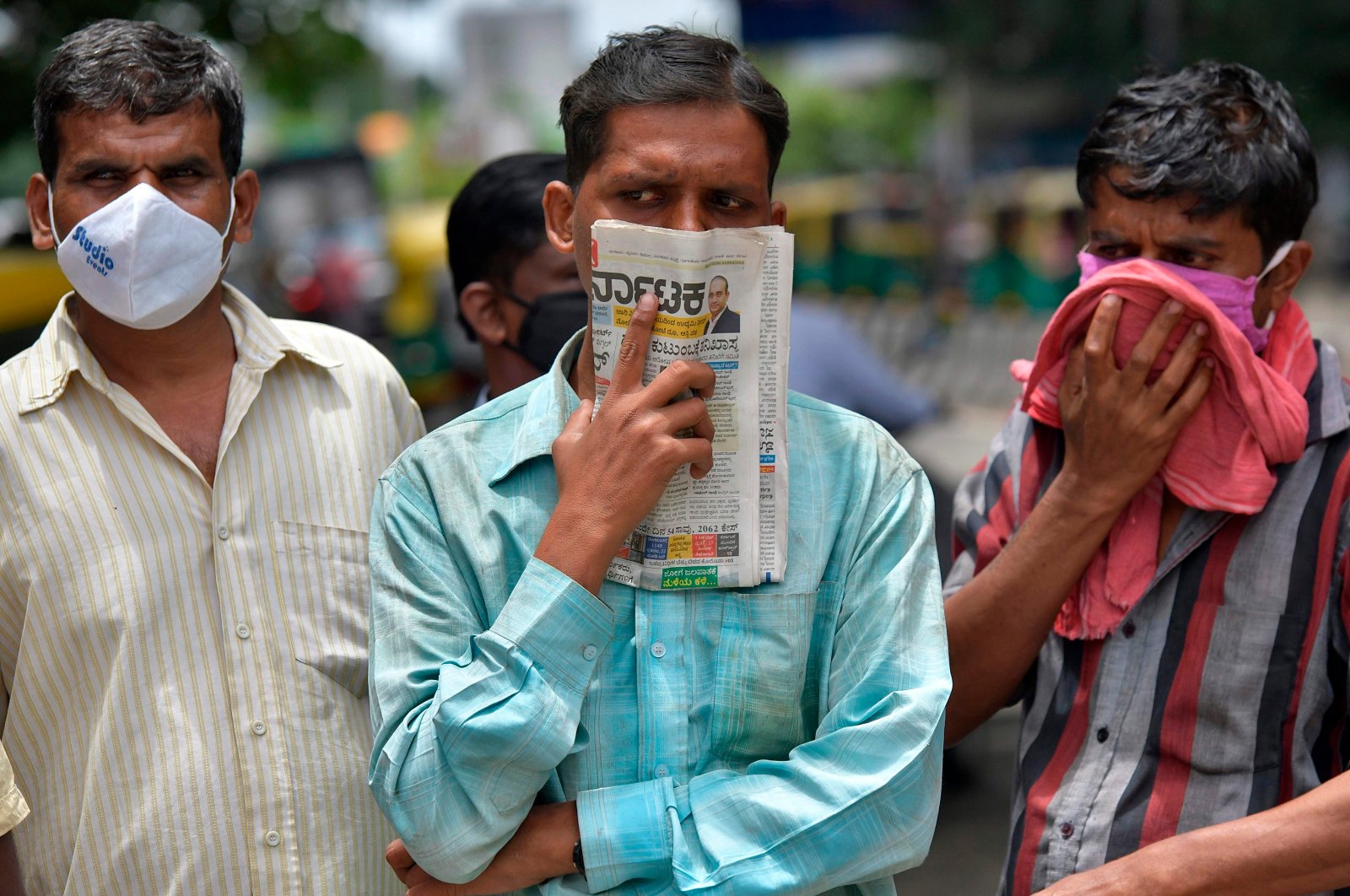 A man holds a newspaper to cover his face in the absence of his face mask during the coronavirus pandemic, in Bangalore, India, July 9, 2020. (AFP Photo)
by ASSOCIATED PRESS Jul 14, 2020 9:19 am
RECOMMENDED

India's number of coronavirus cases jumped by another 28,000 on Tuesday and are fast approaching 1 million.

The Health Ministry also reported another 553 deaths in the past 24 hours, taking total fatalities up to 23,727.

India has largely lifted its nationwide lockdown, and the virus has been spreading at a significant rate, prompting several big cities to impose partial lockdowns.

The southern city of Pune started a 10-day lockdown Tuesday in an attempt to break the chain of infections. Only essentials including milk shops, pharmacies, doctors’ clinics and emergency services will be allowed open.

Eight of India’s 28 states, including the worst-hit Maharashtra, Tamil Nadu and New Delhi, account for nearly 90% of cases.

India is the third worst-affected country in terms of infections, only behind the United States and Brazil.

In other developments in the Asia-Pacific region, Australia’s Queensland state is toughening the punishment for those who break coronavirus quarantine rules. Queensland Deputy Premier Steven Miles said the current fines for breaking a mandatory 14-day hotel quarantine for some visitors or lying about their whereabouts may not be a sufficient penalty. The maximum penalty will now be a higher fine or up to six months’ imprisonment. Queensland reopened its borders to all but Victoria state residents two weeks ago. Victoria is the center of Australia's recent outbreak, adding 270 new infections overnight to its more than 4,000 active cases. The Victorian city of Melbourne is under a six-week lockdown to try to contain the outbreak.

South Korea reported 33 new cases of COVID-19 as its prime minister called for vigilance ahead of the summer holiday season. The figures announced by the Korea Centers for Disease Control and Prevention brought the caseload to 13,512 cases, including 289 deaths. Prime Minister Chung Sye-kyun urged people to avoid crowded areas, maintain distance with others and wear masks as they travel to beaches and other areas during the holiday season.

China said the number of people in treatment for COVID-19 in the country has fallen to just 297, with only three new cases of coronavirus reported, all brought from outside the country. No new deaths were announced, leaving the total at 4,634 out of 83,605 cases of the disease. A pair of experts from the World Health Organization was in China on Monday to make arrangements for an investigation into how the pandemic may have spread after the virus was first detected in the central Chinese city of Wuhan late last year.