Anti-coup protests in Myanmar swell to largest in decade 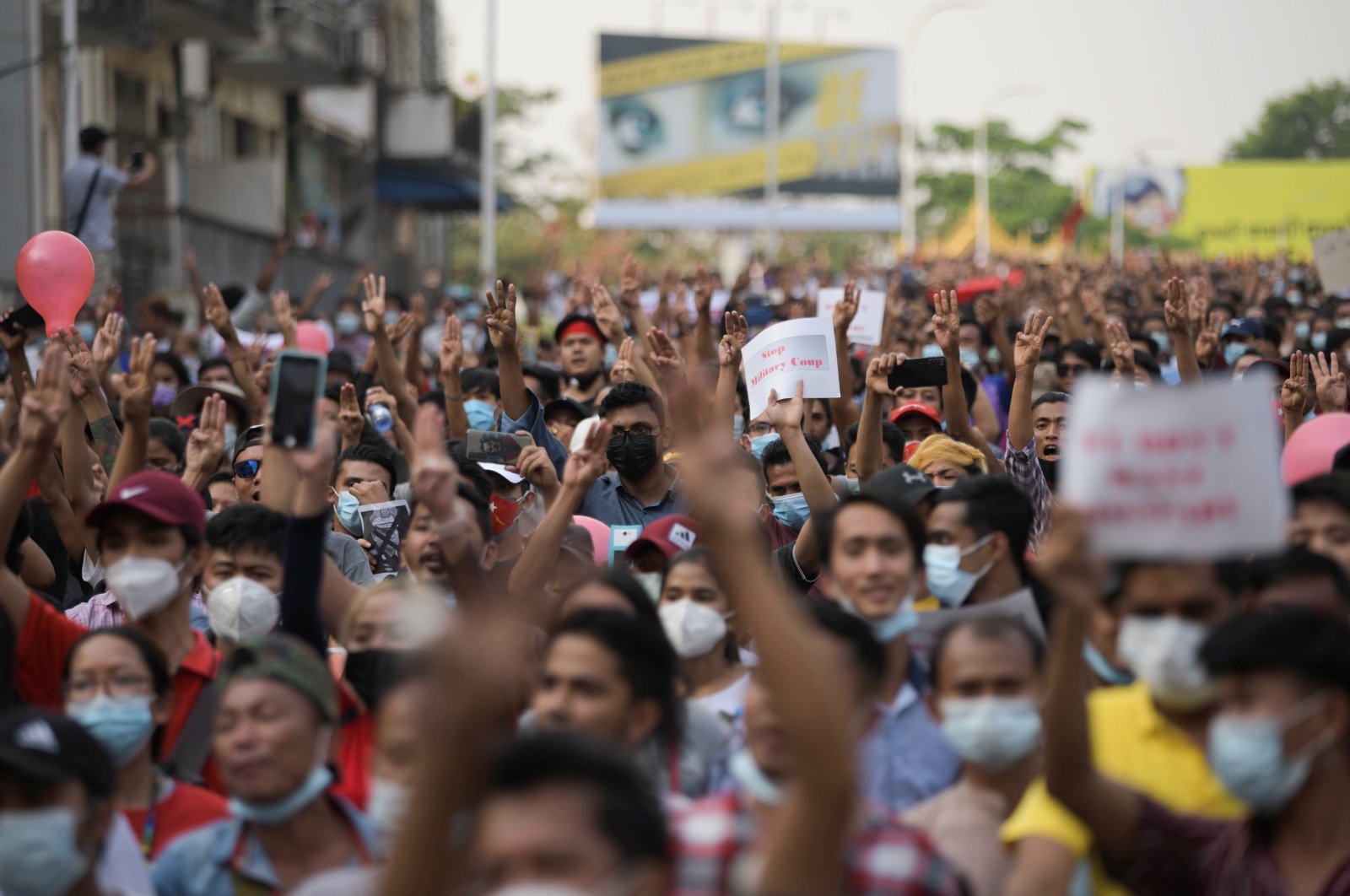 Tens of thousands of people marched for a second day in Myanmar’s biggest city on Sunday, and thousands more assembled across the country to protest against the coup that took place on Monday, as an internet blackout failed to stifle growing outrage at the military's ouster of elected leader Aung San Suu Kyi.

The protests were the biggest demonstrations in the country since the 2007 Buddhist monk-led Saffron Revolution. Some estimates put the number of protesters in Yangon at 100,000, and there were reports of large demonstrations in other cities, with rallies condemning the coup that brought Myanmar's 10-year experiment with democracy to a crashing halt, as Agence France-Presse (AFP) reported.

Police with riot shields blocked the path of the protesters at several points in the city, but a huge crowd was able to gather near Yangon City Hall without any clashes. Some protesters handed out roses to police officers. Many flashed the three-finger salute inspired by the "Hunger Games" films, which became a symbol of resistance during the pro-democracy protests in Thailand last year.

The surge in popular dissent over the weekend overcame a nationwide internet blockade, similar in magnitude to an earlier shutdown that coincided with the arrest of Suu Kyi and other senior leaders on Monday. Monitoring service NetBlocks said internet access was partially restored on some mobile networks in Myanmar Sunday afternoon, but social media platforms remained blocked and it was unclear how long the connectivity would last.

Online calls to protest have prompted bold displays of defiance, including the nightly deafening clamor of people banging pots and pans – a practice traditionally associated with driving out evil spirits.

The U.N. Human Rights office has said Myanmar authorities "must ensure the right to peaceful assembly is fully respected and demonstrators are not subjected to reprisals."

Myanmar's military seized power in the early hours of Monday, bringing the Southeast Asian nation's troubled democratic transition to a sudden halt and drawing international outrage. On Saturday, tens of thousands took to the streets in the first mass protests since the coup.

The next morning, massive crowds from all corners of Yangon converged on Hledan township, some walking through stalled traffic, and marched under bright sunshine in the middle of the road, according to Reuters.

They waved NLD flags and gestured with the three-finger salute that has become a symbol of protest against the coup. Drivers honked their horns and passengers held up photos of Nobel Peace Prize laureate Suu Kyi.

As protests gathered steam after the coup, the junta ordered telecom networks to freeze access to Facebook, an extremely popular service in the country and arguably its main mode of communication. The platform had hosted a rapidly growing "Civil Disobedience Movement" forum that had inspired civil servants, health care professionals and teachers to show their dissent by boycotting their jobs.

On Sunday, live Facebook video feeds showed the Yangon protesters as they marched through the streets. It was not immediately clear how they bypassed the government block.

The military had widened its efforts to quell organized dissent on Friday when it demanded new blocks on other social media services including Twitter.

"The generals are now attempting to paralyze the citizen movement of resistance – and keep the outside world in the dark – by cutting virtually all internet access," said Tom Andrews, U.N. special rapporteur on human rights in Myanmar, ahead of the Sunday protests.

In addition to Suu Kyi and some of her top aides, dozens have been detained so far. The precise number of arrests is not yet known, but the monitoring group Assistance Association for Political Prisoners said Saturday that more than 150 people were still in custody.

Rumors that Suu Kyi had been released triggered brief but raucous street celebrations among her supporters on Saturday, before they were denied by her lawyer who said she remained in detention.

An immensely popular figure in Myanmar despite a tarnished reputation in the West, Suu Kyi has not been seen in public since the coup, but a party spokesperson said Friday she was "in good health." Two days after the coup, criminal charges were filed against her related to the illegal import of a set of walkie-talkies.

The military had hinted at its coup intentions days in advance, insisting that the NLD's landslide victory in the November elections was the result of voter fraud. Following the takeover, the junta proclaimed a one-year state of emergency after which it promised to hold fresh elections, without offering any precise timeframe.

The coup has been widely condemned by the international community, with U.S. President Joe Biden leading calls for the generals to relinquish power and release those arrested in the post-coup crackdown.