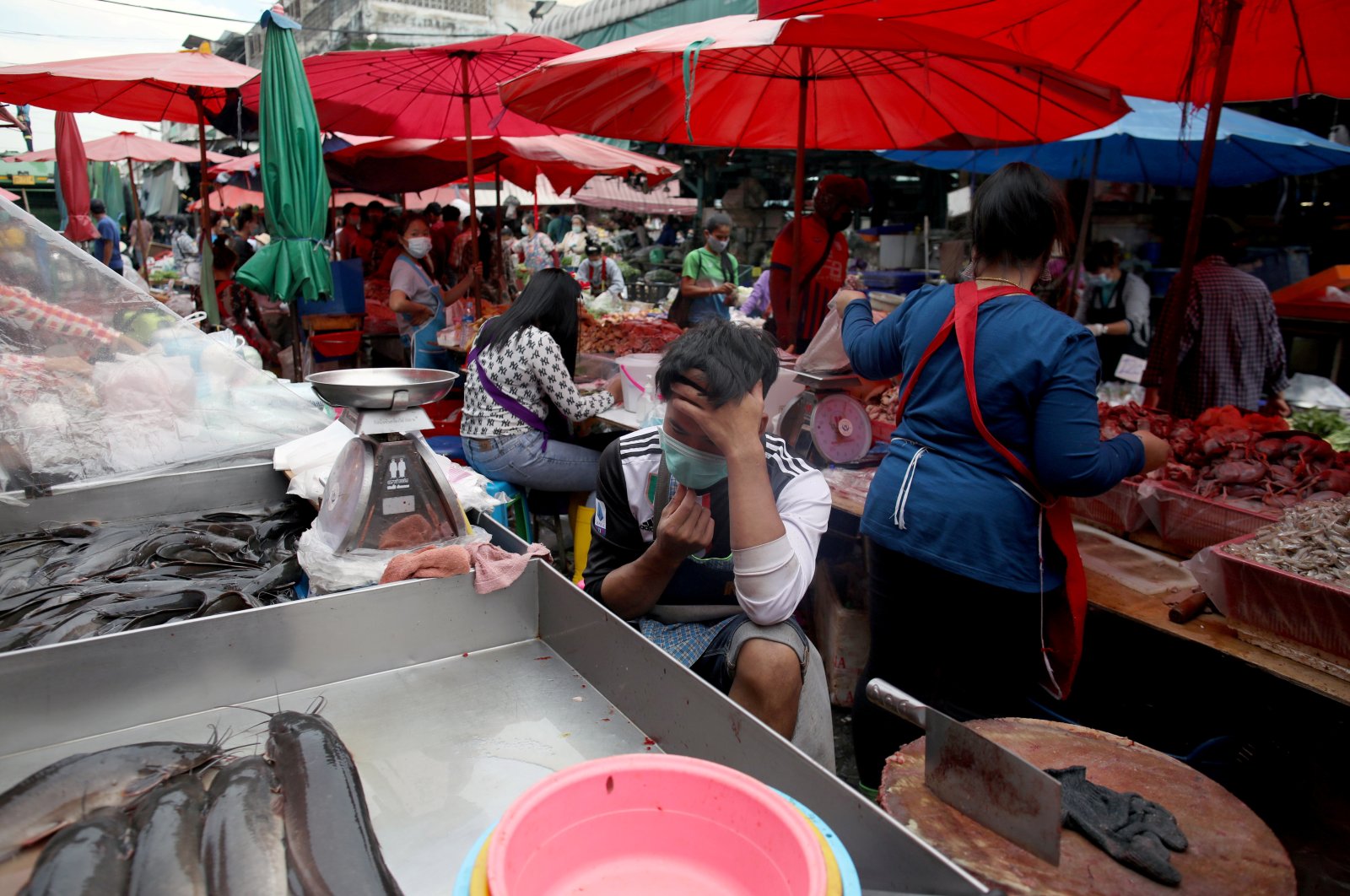 Migrant workers from Myanmar work at a street market amid the coronavirus pandemic in Bangkok, Thailand, Dec. 23, 2020. (Reuters Photo)
by REUTERS Dec 24, 2020 11:35 am
RECOMMENDED

"Wherever you see Myanmar people, shoot them down," read one Thai comment on YouTube after a surge of coronavirus cases among workers from Myanmar.

The outbreak, first detected at a seafood market near Bangkok, has prompted a flare-up in such online hate speech as well as questions over the treatment of millions of migrant workers in traditionally tolerant Thailand.

Shifting sentiment had real consequences, he said, with workers from Myanmar, previously known as Burma, being blocked from buses, motorcycle taxis and offices.

One of the many incendiary comments on social media seen by Reuters called for infected migrant workers to remain untreated and punishment for people that brought them into Thailand.

The rhetoric reflects a global pattern since the start of the pandemic of foreigners being blamed for spreading the virus.

Prime Minister Prayuth Chan-ocha this week said illegal immigration was behind the outbreak in a country that had brought COVID-19 under control, although Thailand's virus task force appealed for sympathy for immigrants.

The independent Social Media Monitoring for Peace group told Reuters it found hundreds of comments classified as hate speech on YouTube with others on Facebook and Twitter.

After Reuters flagged some posts, Facebook said it had removed several for violating hate speech policies.

"We know that hate speech targeted towards vulnerable communities can be the most harmful," a Facebook spokesperson said, saying its technology detected 95% of hate speech.

Facebook came under heavy criticism for the role it played in spreading hate speech that fueled violence against Rohingya Muslims in Myanmar in 2017 and has since invested in systems that can rapidly detect and remove such content.

Not all of the social media traffic has been negative, with some Thais defending the Myanmar workers.

Government spokespeople in Thailand and Myanmar did not respond immediately to requests for comment on hate speech.

The outbreak was first detected last week at a shrimp market at Samut Sakhon, barely 35 kilometers (20 miles) from central Bangkok. Since then nearly 1,300 infections linked to the market have been found while thousands of people have been quarantined.

"We feel really sad that we Myanmar workers are being blamed," said Nay Lin Thu, a 35-year-old worker from Myanmar who has now volunteered to help others. "We are told 'this happened because of you Myanmar.' Mostly we do not respond but some of us couldn’t contain their anger."

Officially, Thailand has nearly 1.6 million workers from Myanmar, almost two-thirds of all migrant workers, but the real figure is higher because of illegal immigration. Most migrants are laborers or work in service industries.

"Thai people won't take the jobs they are doing," Taweesin Wisanuyothin of Thailand's COVID-19 taskforce said as he pleaded for tolerance in a televised broadcast. "Today they are our family ... Both Myanmar and Thai people are Buddhists."

Thailand has traditionally been seen as tolerant of foreigners, but a historic enmity has been revived on social media with references to the 18th-century destruction by Burmese forces of Ayutthaya, capital of what was then known as Siam.

Myanmar has suffered a much more severe outbreak of the coronavirus, with over 2,500 dead from nearly 120,000 confirmed cases compared with 60 fatalities from over 5,800 cases in Thailand.

How the new cases first appeared in Thailand is unclear.

Similar outbreaks among migrant workers living close together in Malaysia and Singapore showed how the virus can spread undetected among healthy young people who show few symptoms. It was first detected in a 67-year-old woman.

"Our judgement is that silent carriers have been present in Thailand," said Sein Htay of the Yangon-based Migrant Worker Rights Network. "Living conditions for Myanmar workers are difficult for social distancing with three or four to a room."

Despite the accusations against Myanmar workers of crossing the border illegally, Thais have done so too.

A previous coronavirus scare flared recently when several Thai women returned home, some using illegal border crossings, after an outbreak at the nightlife spot where they worked in Myanmar.