Asia reimposes COVID-19 restrictions due to surge in cases 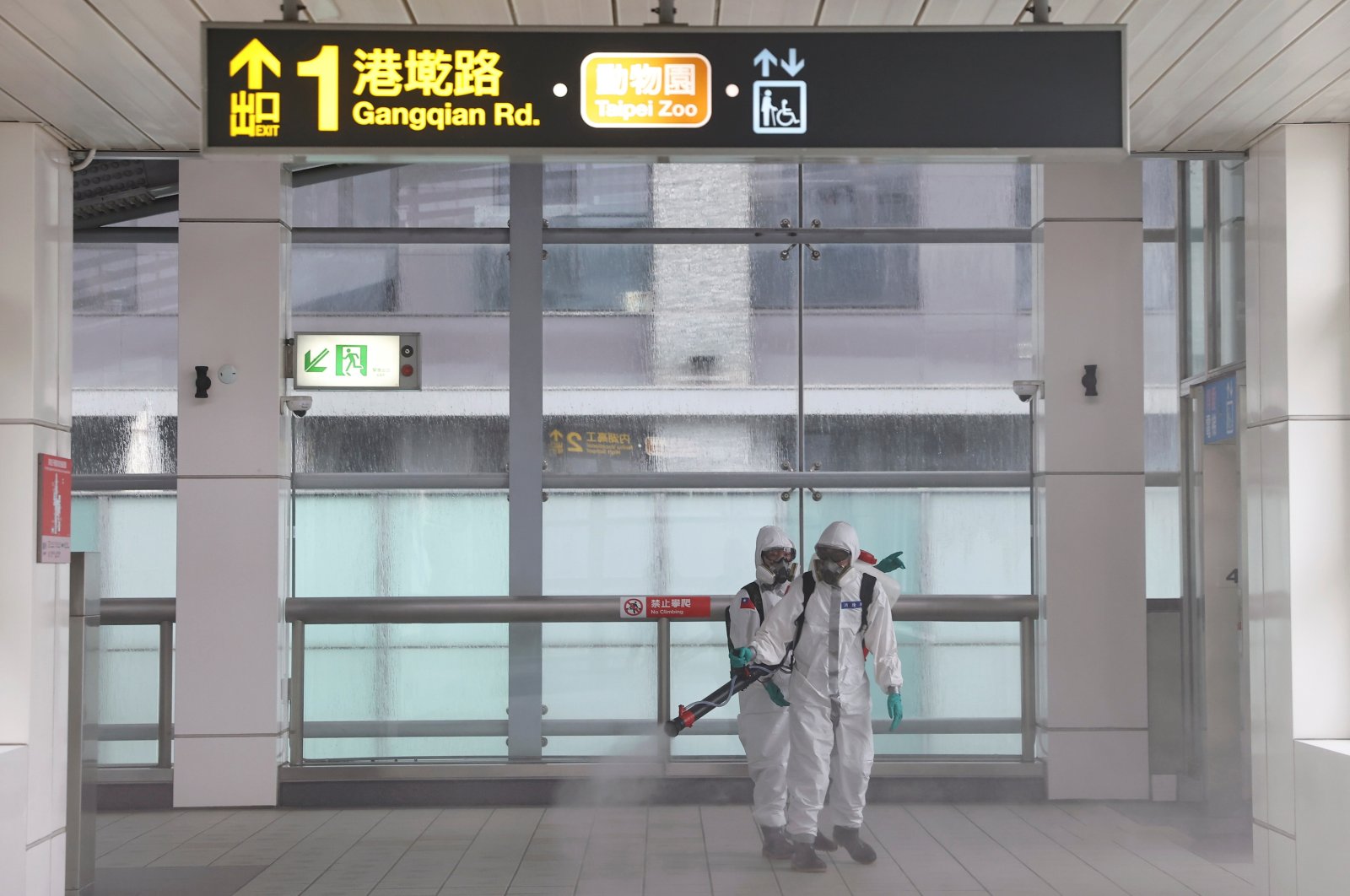 Soldiers in protective suits disinfect a metro station following a surge of COVID-19 infections in Taipei, Taiwan, May 19, 2021. (Reuters Photo)
by ASSOCIATED PRESS May 19, 2021 12:29 pm
RECOMMENDED

Asian countries, where the pandemic had seemed to be well under control, have responded to the resurging coronavirus with new preventive measures, including closing schools and putting restrictions on restaurant service.

Sparsely populated Mongolia has seen its death toll soar from 15 to 233, while Taiwan, considered a major success in battling the coronavirus, has recorded more than 1,000 cases since last week and placed over 600,000 people in two-week medical isolation.

Hong Kong and Singapore have postponed a quarantine-free travel bubble for a second time after an outbreak in Singapore of uncertain origin. China, which has all but stamped out local infections, has seen new cases apparently linked to contact with people arriving from abroad. The resurgence has not come close to the carnage wrought in India and parts of Europe, but it is a keen reminder that the virus remains resilient, despite mask mandates, contact tracing, mass testing and wider deployment of the newest weapon against it – vaccinations.

That is setting back efforts to get social and economic life back to normal, particularly in schools and sectors such as the hospitality industry that are built on public contact. In Taiwan, the surge is being driven by the more easily transmissible variant first identified in Britain, according to Chen Chien-jen, an epidemiologist and the island’s former vice president, who led the highly praised pandemic response last year.

Complicating matters are some senior citizens who frequent slightly racy "tea salons” in Taipei's Wanhua neighborhood. They accounted for about 375 of the new cases as of Tuesday, Chen said. The tea shops are known for providing adult entertainment with singing and dancing.

"These seniors, when they go to these places, want to keep it veiled,” Chen said. "When we are conducting the investigation, they may not be honest.”

In Wanhua, normally a bustling area with food stalls, shops and entertainment venues, the Huaxi night market and historic Longshan Buddhist temple are closed. Kao Yu-chieh, who runs a breakfast shop in the area, said business is down at least 50% since last week.

Taxi driver Wang Hsian Jhong said he has not had a customer in three days. "Everyone is affected. This is a Taiwan-wide problem. We have to get through it,” he said, puffing on a cigarette on a street in Wanhua. The island has shut all schools and restrictions, previously only in the Taipei area, were expanded island-wide Wednesday. Restaurants, gyms and other public venues were closed, and gatherings of more than five people indoors and more than 10 people outdoors are banned. Taiwan President Tsai Ing-wen has sought to reassure a public that is reverting to panic-buying and shunning public places.

"We will continue to strengthen our medical capacity,” Tsai said, adding that vaccines are arriving from abroad.

Malaysia unexpectedly imposed a one-month lockdown through June 7, spooked by a sharp rise in cases, more-infectious variants and weak public compliance with health measures. It was the second nationwide lockdown in just over a year and came after the country’s cases shot up fourfold since January. Cases now are more than 479,000 and 1,994 people have died, a sum also up by four times from January. Interstate travel and social activities are banned, schools are shut, and restaurants can provide only takeout service. The government has warned that hospitals have almost maxed out their capacity to take new coronavirus cases.

Singapore has imposed stringent social distancing measures until June 13, restricting public gatherings to two people and banning dine-in service at restaurants. That came after the number of COVID-19 infections of untraceable origin rose to 48 cases in the past week, from 10 cases the week before. Singapore had previously been held up as a role model after keeping the virus at bay for months. Schools moved online after students in several institutions tested positive. Wedding receptions are no longer allowed, and funerals are capped at 20 people.

For wedding planner Michelle Lau, at least seven clients either canceled or postponed weddings meant to take place over the next month. Other couples have opted for a simple ceremony without a reception, she said. Janey Chang, who runs two Latin dance studios in Singapore, says that the tougher restrictions have drastically reduced class size. "We are taking on fewer students, but the costs such as rent remain the same,” Chang said. "Whether we can continue to operate is highly dependent on the number of COVID-19 cases.”

Hong Kong has responded to fresh outbreaks by increasing the quarantine requirement from 14 to 21 days for unvaccinated travelers arriving from high-risk countries, including Singapore, Malaysia and Japan, and, farther afield, Argentina, Italy, the Netherlands and Kenya. China has set up checkpoints at toll booths, airports and railway stations in Liaoning province, where new cases were reported this week.

Travelers must have proof of a recent negative virus test, and mass testing was ordered in part of Yingkou, a port city with shipping connections to more than 40 countries. Thailand reported 35 deaths Tuesday, the highest since the outbreak started, and an additional 29 Wednesday. That brought its number of fatalities to 678, of which 584 have been reported in the latest wave. About three-quarters of Thailand’s more than 116,000 cases have been recorded since the beginning of April.

Thailand had about 7,100 cases in all of last year in what was regarded as a success story. The resurgence has posed difficult choices for governments, particularly in poorer nations where lockdown restrictions can increase financial suffering for those already living on the edge of starvation.

In the Philippines, President Rodrigo Duterte has eased a lockdown in the bustling capital and adjacent provinces to fight economic recession and hunger but has still barred public gatherings this month, when many Roman Catholic festivals are held. COVID-19 infections started to spike in March to some of the worst levels in Asia, surging beyond 10,000 a day and prompting Duterte to impose the lockdown in and around Manila in April.

The Philippines has reported more than 1.1 million infections with 19,372 deaths, though the surge has begun to ease. Health Secretary Francisco Duque III said the partial resumption of economic activities, increased noncompliance with restrictions and inadequate contact tracing of people exposed to the coronavirus combined to spark the steep rise in infections. Experts said the delivery of vaccines, however, delayed and small in amount, also fostered false confidence the pandemic might be ending.