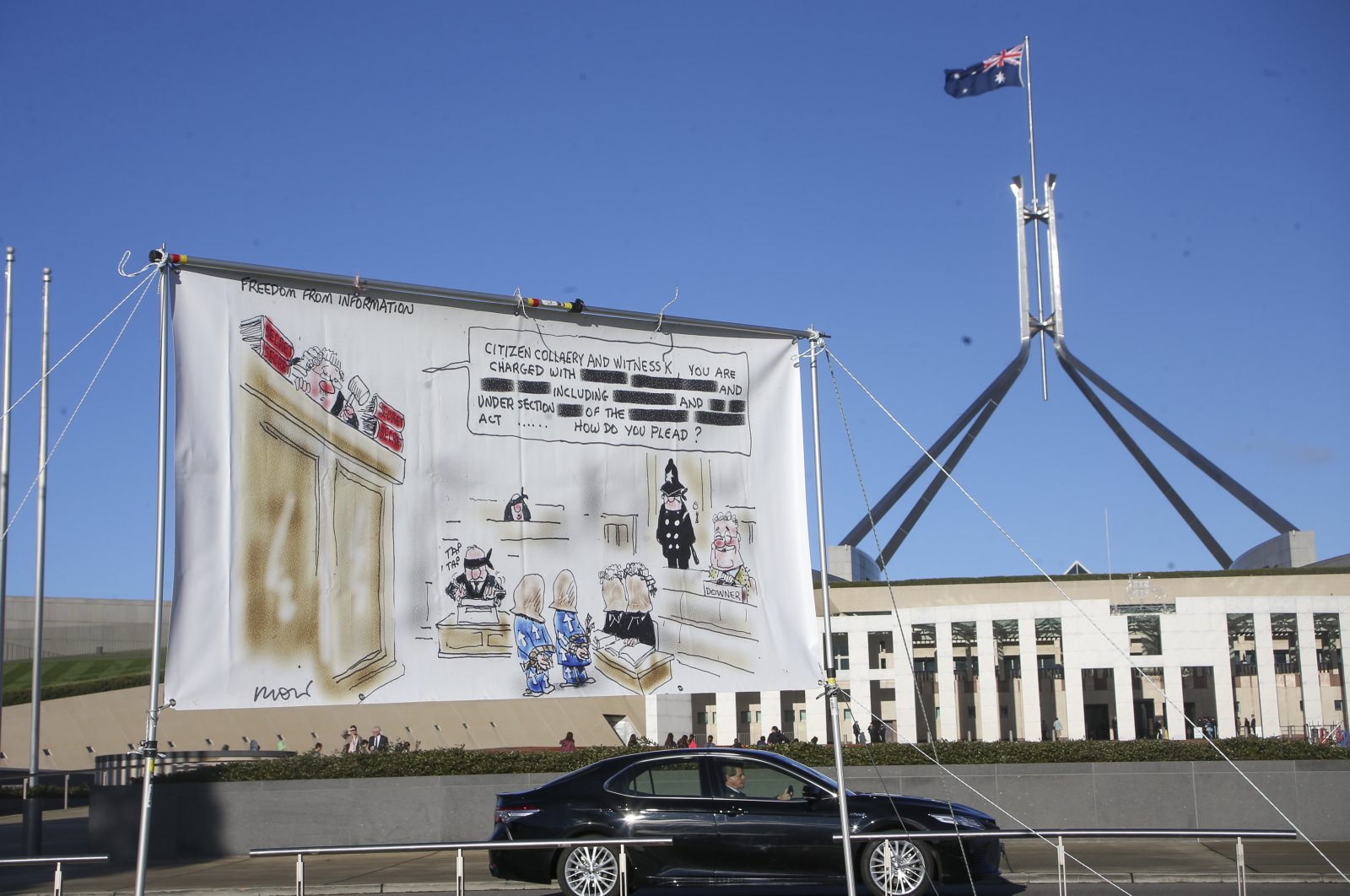 A protest banner hangs outside Parliament House in the Australian capital during a protest against the prosecution of lawyer Bernard Collaery. Critics of the secret prosecutions of a former Australian spy and his lawyer argue they are another example of a government concealing political embarrassment under the guise of national security, June 17, 2021, Canberra, ACT, Australia. (AP Photo)
by ASSOCIATED PRESS Jun 20, 2021 5:35 pm
RECOMMENDED

The suppression of information in Australia, which is increasingly being seen as damaging press freedom in the country, is at the center of accusations that the country has become one of the most secretive Western democracies in the world.

Last week, a former Australian spy was convicted over his unconfirmed role as a whistleblower who revealed an espionage operation against the neighboring government of East Timor.

It is the latest high-profile case in a national system in which secrecy laws, some dating back to the colonial era, are routinely used to suppress information. Police have also threatened to charge journalists who exposed war crime allegations against Australian special forces in Afghanistan, or bureaucrats’ plan to allow an intelligence agency to spy on Australian citizens.

Australians do not even know the name of the former spy convicted Friday. The Canberra court registry listed him as “Witness K.” His lawyer referred to him more respectfully as “Mr. K” in court.

K spent the two-day hearing in a box constructed from black screens to hide his identity. The public and media were sent out of the courtroom when classified evidence was discussed, which was about half the time.

The only sign that anyone was actually inside the box was when a voice said “guilty” after K was asked how he pleaded.

The Australian government has refused to comment on allegations that K led an Australian Secret Intelligence Service operation that bugged government offices in the East Timorese capital in 2004, during negotiations on the sharing of oil and gas revenue from the seabed that separates the two countries.

The government canceled K’s passport before he was to testify at the Permanent Court of Arbitration in The Hague in 2014 in support of the East Timorese, who argued the treaty was invalid because Australia failed to negotiate in good faith by engaging in espionage.

There was no evidence heard in open court of a bugging operation, which the media reported was conducted under the guise of a foreign aid program.

K was given a three-month suspended sentence. If he had been sent to prison, there were court orders designed to conceal his former espionage career by restricting what he could tell friends and associates to explain his predicament.

He had faced up to two years in prison. Since his offense, Australia has continued to tighten controls on secrecy, increasing the maximum sentence to 10 years.

As lacking in transparency as K’s prosecution was, it was a vast improvement on Australia’s treatment of another former intelligence officer known as "Witness J."

J has been described by the media as possibly the only person in Australian history to be tried, sentenced and imprisoned in secret. But understandably, no one seems to know for sure.

As with K, it is illegal to reveal J’s identity.

J pleaded guilty in a closed courtroom in the same Canberra court complex in 2018 to charges related to mishandling classified information and potentially revealing the identities of Australian agents. He spent 15 months in prison.

The secret court hearing and imprisonment only became public in late 2019 because J took court action against the Australian Capital Territory (ACT) government, claiming his human rights were violated by police who raided his prison cell in search of a memoir he was writing.

Outraged lawyers then called for the first major review of the nation’s secrecy laws since 2010. Whistleblowers as well as journalists currently are under threat from more than 70 counterterrorism and security laws passed by the Australian Parliament since the 9/11 attacks in the United States.

Andrew Wilkie, a former government intelligence analyst whistleblower who is now an independent federal lawmaker, is a vocal critic of national security being used as an excuse to pander to paranoia and shield embarrassment.

Wilkie opposed the prosecution of K and his former lawyer Bernard Collaery. Collaery is fighting a charge that he conspired with K to reveal secrets to East Timor, and wants his trial to be held in the open.

“I am in no doubt that one of the reasons for the secrecy around the K and Collaery matter is the enormous political embarrassment that we were spying on one of the poorest countries in the world to get an upper hand in a business negotiation,” Wilkie said.

Wilkie quit his intelligence job in the Office of National Assessments days before Australian troops joined U.S. and British forces in the 2003 Iraq invasion. He publicly argued that Iraq did not pose a sufficient threat to warrant invasion and that there was no evidence linking Iraq’s government to al-Qaida.

“I basically accused the government of lying,” Wilkie said.

Although the government attempted to discredit him, Wilkie said he was never threatened with prosecution for revealing classified information.

For many, Australian authorities arguably took a step too far in June 2019 in their bid to chase down whistleblowers, intimidate journalists and protect government secrets.

Police raided the home of News Corp. journalist Annika Smethurst, and the next day the headquarters of the government-funded Australian Broadcasting Corp (ABC). Both media outlets had used leaked government documents as the basis of public interest journalism.

The search warrants were issued under Section 70 of the Crimes Act 1914, which prohibited a government employee from sharing information without a supervisor’s permission.

That section has since been replaced under national security legislation that expanded the crime to include a government employee sharing opinions or reporting conversations between others.

Media law experts Johan Lidberg and Denis Muller said Australia is the only country within the "Five Eyes" intelligence-sharing alliance – which includes the U.S., Britain, Canada and New Zealand – that gives its security agencies the power to issue search warrants against journalists in the hunt for public interest whistleblowers in the name of national security.

Police decided in May last year that they had insufficient evidence to charge journalist Smethurst over an article published in April 2018. She had reported that two government department bosses planned to create new espionage powers that would allow an intelligence agency to legally spy on Australian citizens.

Prosecutors also decided in October last year that the “public interest does not require a prosecution” of ABC reporter Dan Oakes over a television investigation broadcast in July 2017 that alleged Australian troops killed unarmed men and children in Afghanistan in potential war crimes.

But David McBride, a former Australian army lawyer who admits leaking classified documents to the ABC, is fighting multiple charges. He calculates he faces up to 50 years in prison for being a whistleblower.

There have been two parliamentary inquiries into press freedom since the police raids, but progress toward change has been criticized as slow and weak.

The Australian Parliamentary Joint Committee on Intelligence and Security, which has rubber-stamped many of the problematic security laws, said many submissions for change warned that "the balance in legislation and culture within the Australian government has tipped away from transparency and engagement to excessive and unnecessary secrecy.”

An Australian Senate committee inquiry into press freedom last month made several recommendations, mostly for more government investigation. The committee asked whether secret information offenses should be amended to include a harm requirement and whether journalists should still have to prove that an unauthorized disclosure was in the public interest.

Wilkie, the deputy, argues Australia has drifted into becoming a “pre-police state” through its embrace of secrecy.

“It’s now unremarkable when a government cloaks something in a national security need for secrecy,” Wilkie said. “We don’t bat an eyelid anymore. We should be outraged.”