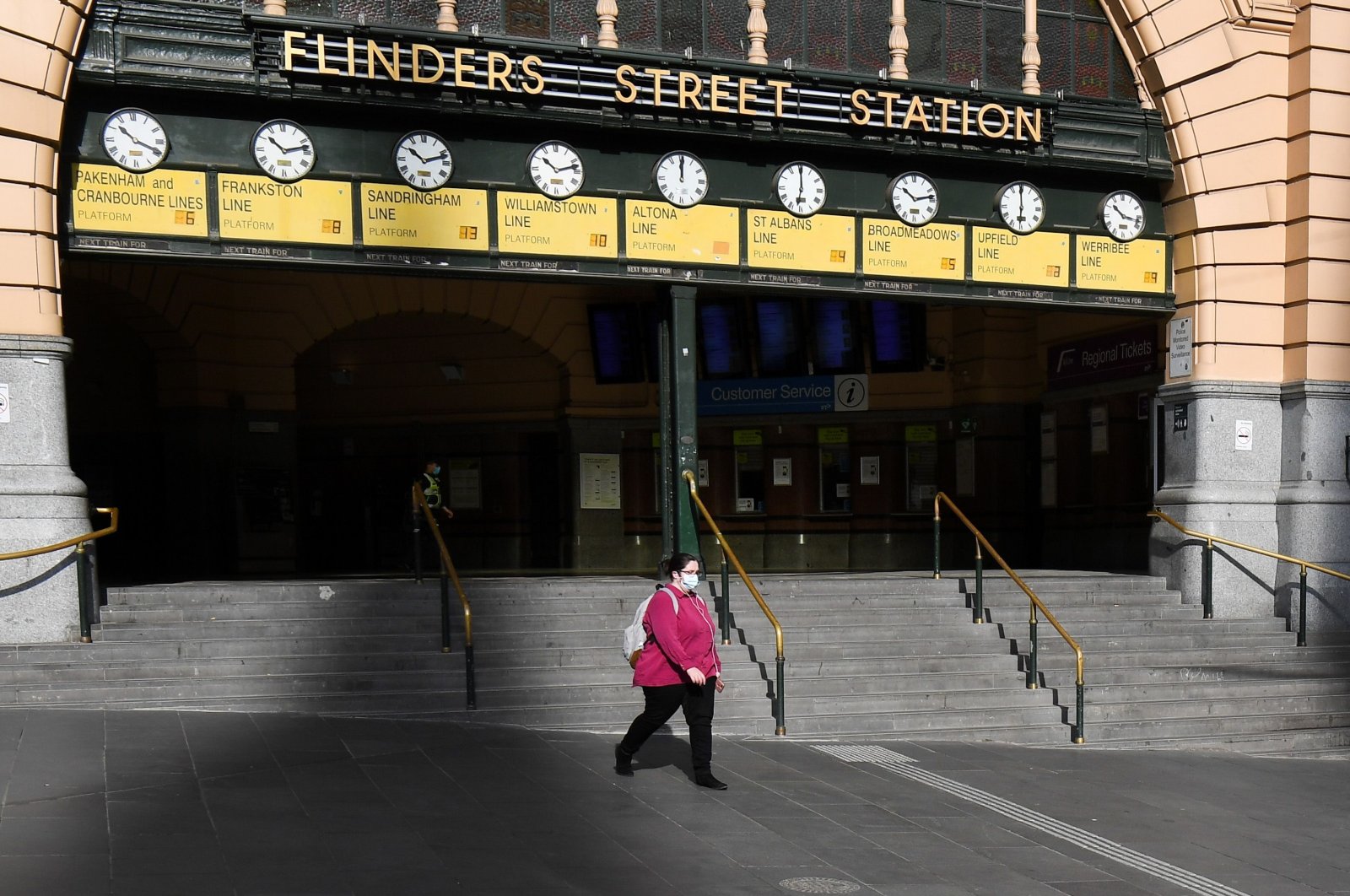 A woman walks out of a near-deserted Flinders Street Station in Melbourne on Aug. 3, 2020, after the state announced new restrictions as the city battles fresh outbreaks of the coronavirus. (AFP Photo)
by REUTERS Aug 03, 2020 10:23 am
RECOMMENDED

Australia's second-biggest city Melbourne, already under night curfew, announced fresh restrictions on industries Monday, including retail and construction, as it steps up desperate efforts to contain the spread of a resurgent coronavirus.

From Wednesday night, Melbourne will close retail, some manufacturing and administrative businesses as part of a six-week lockdown which is expected to hit 250,000 jobs, roughly the number already impacted.

The state of Victoria declared a "state of emergency" on Sunday due to a surge in community transmissions.

Australia has fared better than many countries, with 18,361 coronavirus cases and 221 deaths, but now risks losing control of the virus in Victoria state which has imposed the country's harshest movement restrictions to date.

"As heartbreaking as it is to close down places of employment ... that is what we have to do in order to stop the spread of this wildly infectious virus," Victoria's state premier, Daniel Andrews, told a news conference.

"Otherwise we are not in for six weeks of restrictions we'll be in for a six-month stint."

Production at meatworks will be cut by one third and workers will be kitted out in protective gear, while construction activities will also be scaled back.

Supermarkets will remain open along with restaurant takeaway and delivery services, but many other retail outlets will close.

"This is a very tough day, and there are many more of those to come before we get to the other side of this," Andrews said.

Restrictions announced on Sunday include a curfew from 8 p.m. to 5 a.m. that will be in place for six weeks, barring the city's nearly 5 million people from leaving their houses except for work or to receive or give care.

"This is devastating ... nobody wanted it to get to this," Treasurer Josh Frydenberg told Nine News television.

"There is only one way out and that is to stem the tide of new cases. This is a big kick in the guts to thousands of small businesses right across the state," he added.

Victoria makes up about a quarter of the national economy.

The state reported 429 new cases Monday, down from 671 new infections on Sunday, but 13 more deaths were the second-highest daily death toll.

With an eye on how quickly the virus swept through Victoria, bordering states announced fresh precautionary measures.

New South Wales, which had 13 new infections overnight, strongly recommended the use of masks in all indoor venues, while South Australia, with two fresh cases, reduced gatherings inside the home to 10 people from 50, and said only those seated at venues can be served alcohol.

"We are proactively putting these restrictions in place to avoid the kind of situation we are seeing in Victoria."

The Victorian outbreak has scuppered Australia's hopes for a quick economic rebound from the country's first recession in nearly three decades.

"Part of our criteria is anywhere we have quarantine-free travel, they have to be free of community transmission for a period of time, 28 days," she told New Zealand's network Three.

"That is going to take a long time for Australia ... so that will be on the back burner for some time."

Both countries had previously said international travel between the two could restart as soon as September.