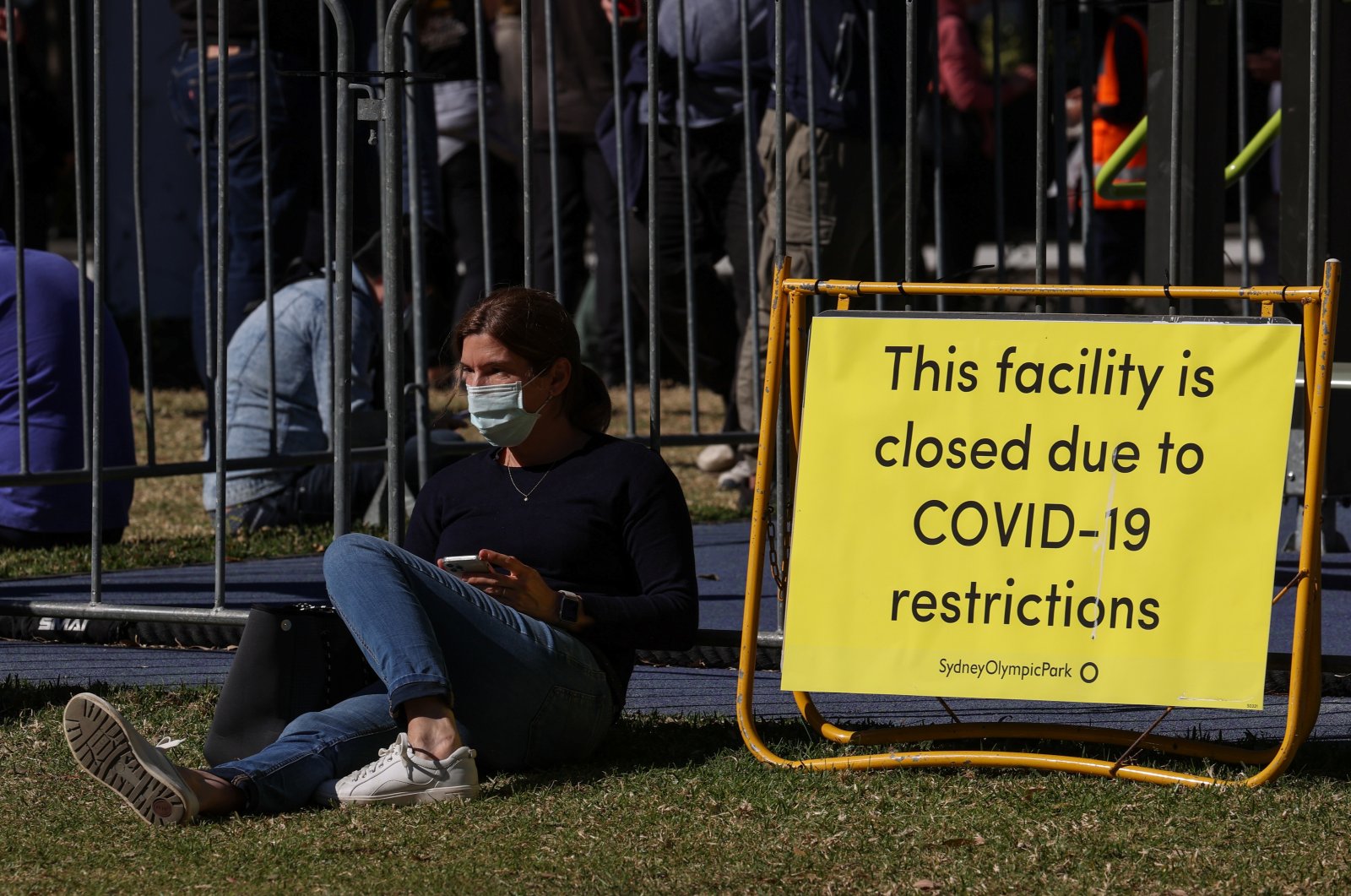 People spread out in a park while waiting for their appointments outside a COVID-19 vaccination center at Sydney Olympic Park during a lockdown to curb the spread of an outbreak in Sydney, Australia, Aug. 16, 2021. (Reuters Photo)
by REUTERS Aug 16, 2021 9:26 am
RECOMMENDED

Sydney, Australia's biggest city, recorded its deadliest day of the coronavirus pandemic Monday as troops and police set up roadblocks to limit the movement of people, while Melbourne faced a nightly curfew and a further two weeks of lockdown.

Sydney, which is in its eighth week of lockdown, is the epicenter of Australia's third COVID-19 wave that threatens to push the country's AU$2 trillion ($1.5 trillion) economy into its second recession in as many years.

"Every death is a person who has loved ones, who has died in tragic circumstances," she added.

Authorities also confirmed the death of a 15-year-old boy from Sydney, who had pneumococcal meningitis and COVID-19.

Australia has confirmed 55 deaths since July 11, breaking a run of more than three months without any fatalities. In total, Australia has recorded 966 COVID-19 deaths.

The toll rose as 200 military personnel were deployed across Sydney to set up roadblocks in the hardest-hit areas, amid persistent reports of people flouting lockdown rules. The latest deployment comes on top of 500 troops deployed last month.

With only 26% of people above 16 years of age fully vaccinated, Australia is vulnerable to the highly infectious delta variant that has steadily spread across the country.

While Sydney, Melbourne, Canberra and Darwin – which entered into lockdown on Monday – are all under tight restrictions, cases have steadily risen.

Victoria state Premier Daniel Andrews said Melbourne's 5 million residents would be subjected to a nightly curfew and the city would remain in a lockdown until Sept. 2 after recording 22 new COVID-19 cases.

"We are at a tipping point. There is simply no option today but to further strengthen this lockdown," Andrews told reporters in Melbourne.

A spike in cases had been driven by people breaking lockdown rules, he said. In one instance, police fined 69 people AU$5,500 each for attending an engagement party in breach of the lockdown.

National capital Canberra recorded 19 new cases as it extended its lockdown for a further two weeks.

Australia's economy rebounded strongly from the initial wave of the pandemic, with unemployment hitting its lowest levels in more than a decade at 4.9% in June. But with its two most populated cities Sydney and Melbourne in lockdown, economists expect a heavy toll.

"Unemployment may spike back up to 5.5% in the months ahead, mainly driven by (New South Wales)," said Shane Oliver, chief economist at AMP.

The outbreak and sluggish vaccine rollout has fuelled pressure on Prime Minister Scott Morrison, who must call an election before May next year. A poll last week showed his approval rating at its lowest level since the pandemic began.

He said more than half of the doses from Poland would be rushed to inoculate 20- to 39-year-olds in the worst-affected suburbs of Sydney.