Baby missing after being handed to US soldier amid Taliban takeover 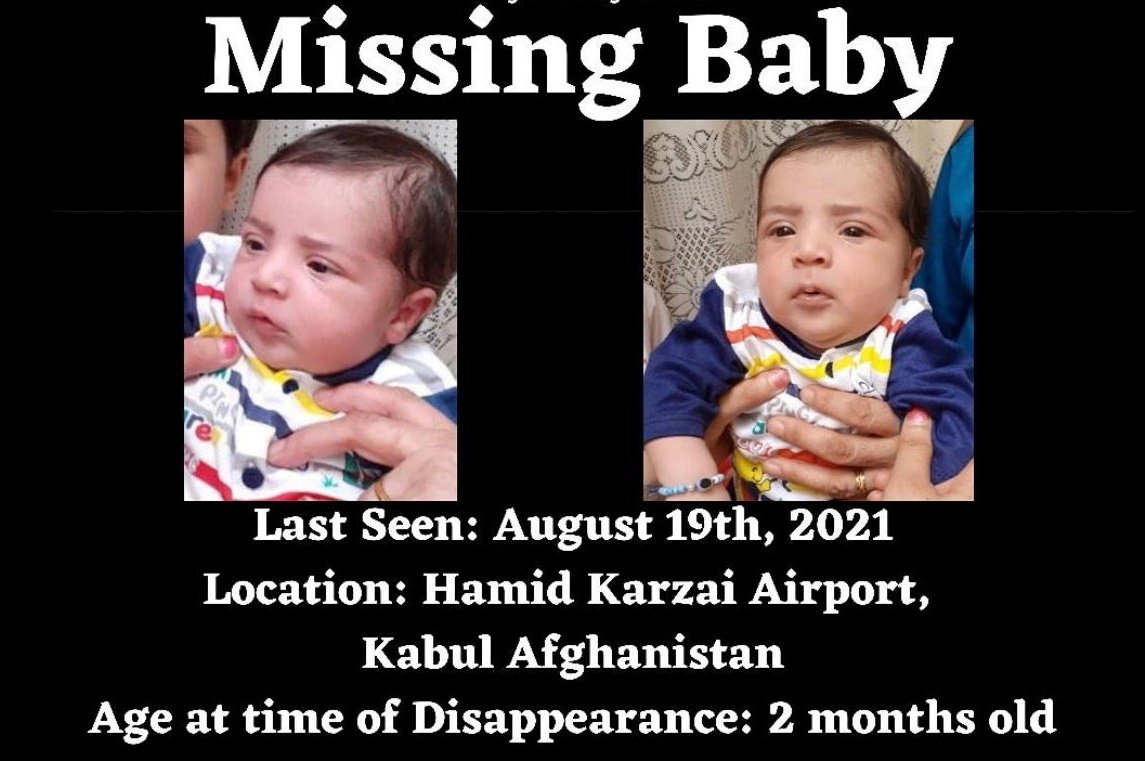 Sohail Ahmadi, around 2-months-old, is seen in these handout pictures shown on a poster, taken in August 2021 in Kabul, Afghanistan. (Courtesy of the Ahmadi family via Reuters)
by REUTERS Nov 09, 2021 2:49 pm
RECOMMENDED

It was a split second decision. Mirza Ali Ahmadi and his wife Suraya found themselves and their five children on Aug. 19 in a chaotic crowd outside the gates of the Kabul Hamid Karzai International Airport in Afghanistan when a U.S. soldier, from over the tall fence, asked if they needed help.

Fearing their 2-month-old baby Sohail would get crushed in the melee, they handed him to the soldier, thinking they would soon get to the entrance, which was only about 16 feet (5 meters) away.

But at that moment, Mirza Ali said, the Taliban – which had swiftly taken over the country as U.S. troops withdrew – began pushing back hundreds of hopeful evacuees. It took the rest of the family more than a half-hour to get to the other side of the airport fence.

Once they were inside, Sohail was nowhere to be found.

Mirza Ali, who said he worked as a security guard at the U.S Embassy for 10 years, began desperately asking every official he encountered about his baby's whereabouts. He said a military commander told him the airport was too dangerous for a baby and that he might have been taken to a special area for children. But when they got there it was empty.

"He walked with me all around the airport to search everywhere," Mirza Ali said in an interview through a translator. He said he never got the commander's name, as he didn't speak English and was relying on Afghan colleagues from the embassy to help communicate. Three days went by.

"I spoke to maybe more than 20 people," he said. "Every officer – military or civilian – I came across I was asking about my baby."

He said one of the civilian officials he spoke to told him Sohail might have been evacuated by himself. "They said 'we don't have resources to keep the baby here.'"

Mirza Ali said he saw other families handing their babies over the Kabul airport fence to soldiers at the same time. One video clip of a small baby in a diaper being hoisted by her arm over razor wire went viral on social media. She was later reunited with her parents.

Ever since his baby went missing dates are a blur, Mirza Ali said. Every person he comes across – aid workers, U.S. officials – he tells them about Sohail. "Everyone promises they will do their best, but they are just promises," he said.

An Afghan refugee support group created a "Missing Baby" sign with Sohail's picture on it and is circulating it among their networks in the hopes that someone will recognize him.

A U.S. government official familiar with the situation said the case had been flagged for all the agencies involved, including the U.S. bases and overseas locations. The child was last seen being handed to a U.S. soldier during the chaos at the Kabul airport but "unfortunately no one can find the child," the official said.

A State Department spokesperson said the government is working with international partners and the international community "to explore every avenue to locate the child, which includes an international amber alert that was issued through the International Center for Missing and Exploited Children."

Suraya, who also spoke through a translator, said she cries most of the time and that her other children are distraught.

"All I am doing is thinking about my child," Suraya said. "Everyone that is calling me, my mother, my father, my sister, they all comfort me and say 'don't worry, God is kind, your son will be found.'"