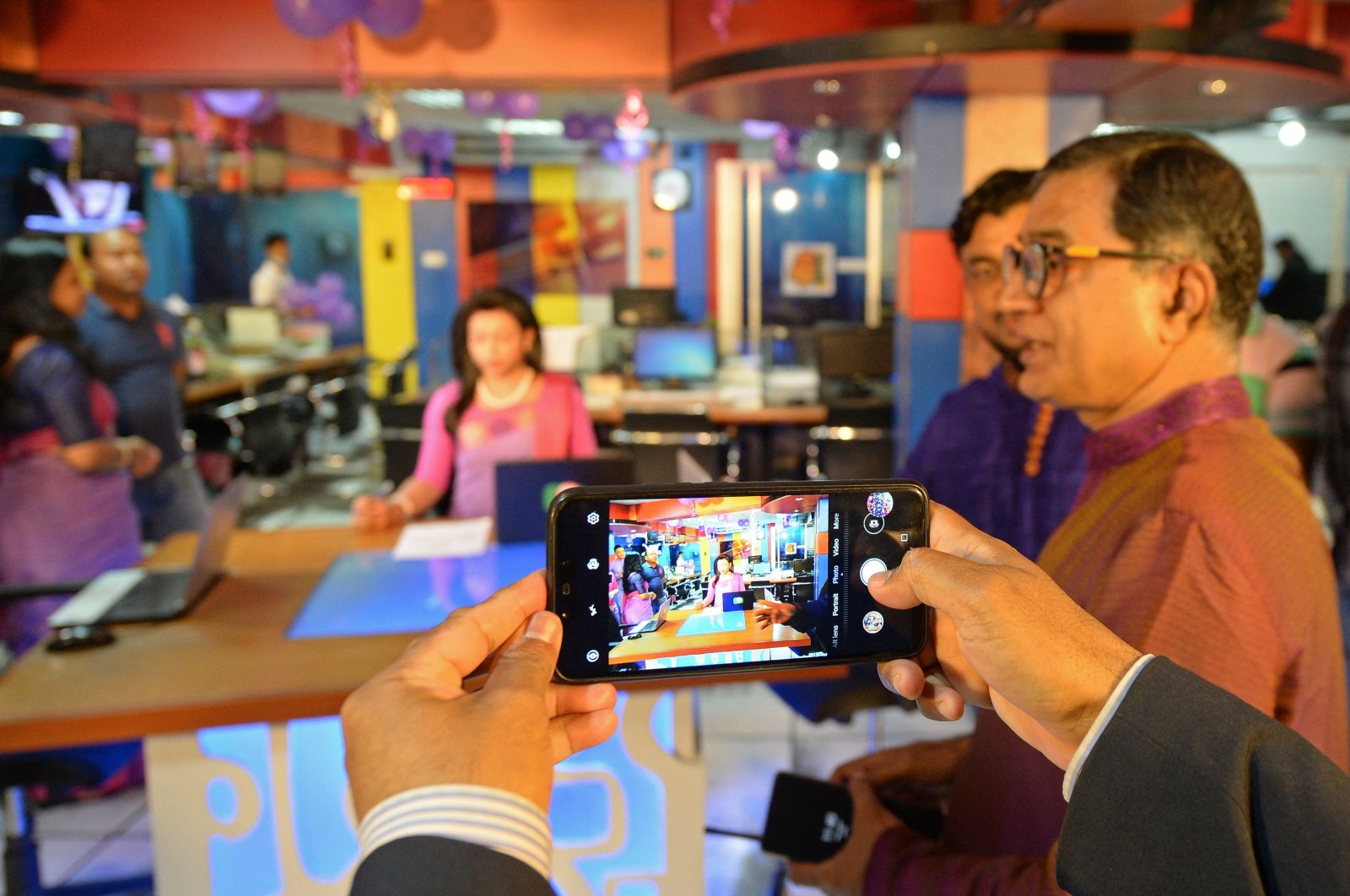 A co-worker of Tashnuva Anan Shishir who claims to be Bangladesh's first transgender television news presenter takes her photograph using a mobile phone at a news studio in Dhaka on March 8, 2021. (AFP Photo)
by DAILY SABAH Mar 09, 2021 1:12 pm
RECOMMENDED

The Bangladesh government spent more than $330,000 on phone-hacking equipment made by an Israeli company, according to documents obtained by Al-Jazeera’s Investigative Unit (I-Unit) and Israeli newspaper Haaretz.

The move follows allegations made by the investigative team of the Doha-based media outlet which is accused Bangladesh of purchasing Israeli-made surveillance equipment that can be used to track and monitor hundreds of people's cellphones, in spite of Dhaka not recognizing Tel Aviv.

Al-Jazeera revealed Tuesday that UFED is a product that is capable of accessing and exporting data from mobile phones. The device is developed by the Cellebrite security firm found in Israel and currently based in the U.S. state of Virginia. It is unclear whether UFED was provided to Bangladesh directly by the Israeli company or via a Cellebrite subsidiary based elsewhere in the world, presumably to mask its origins.

Bangladesh's policy toward Israel is highly visible, considering that Dhaka does not recognize the state of Israel, forbids trade with it and prevents its citizens from traveling there. Also, as a Muslim-majority country Bangladesh officially stands in solidarity with the Palestinians on the basis they are denied civil rights and live under Israeli military occupation, according to reports by Al-Jazeera.

Behind the invisible walls between the two countries, it is not the first time Bangladesh has done business with Israeli companies. The latest documents obtained by I-Unit, which Al-Jazeera also found on the Bangladesh home ministry’s website, related to contracts signed in 2018 and 2019. Documents show that the Bangladesh military in 2018 signed a contract to acquire mobile phone interception equipment from Israeli firm PICSIX Ltd. again in February 2019.

Bangladeshi officers received training from Israeli intelligence experts in the Hungarian capital, Budapest. The Ministry of Defence in Bangladesh said the equipment, a passive mobile phone monitoring system called P6 Intercept, was made in Hungary and was purchased for use on United Nations missions.

The contract listed the manufacturer of P6 Intercept as PICSIX Ltd Hungary, yet no public record of such a company exists, and all Picsix equipment is made in Israel. The paperwork details how nine officers from the country’s Criminal Investigations Department were approved to travel to Singapore in February 2019 to receive training on UFED to allow them to unlock and extract data from mobile phones. It outlines how the Bangladeshi staff would ultimately qualify as Cellebrite Certified Operators and Cellebrite Certified Physical Analysts.

The documents also say the Rapid Action Battalion (RAB), a paramilitary force that has a well-documented record of abductions, torture and disappearances, would be trained on the usage of Cellebrite’s hacking systems under an ongoing project that began in 2019 and is set to be completed in June 2021.

The Bangladesh government appears to be investing heavily in electronic surveillance systems and the leaked documents also outline the use of a wide range of devices – from WiFi interceptors and surveillance drones to IMSI-catchers, a tool that emulates cell towers to trick cellular devices into revealing their locations and data.

Eitay Mack, an Israeli human rights lawyer who has been fighting the export of Israeli defense technology that could be used for human rights violations argued that Israel uses the exports of these tools to build relationships with countries with poor human rights records such as Bangladesh, South Sudan and the United Arab Emirates (UAE).

“Exporting these tools is easier than, for example, selling Bangladesh Israeli rifles. These kinds of systems are less present, and this is how Israel is able to create secret relationships with these countries,” Mack said. “But it’s important to note that this is not a relationship between the Israeli people and the Bangladeshi people, or the Emirati people. It’s a relationship between the Israeli government and the local regime.

“This kind of relationship means that Israeli is helping local repression in many places around the world.”