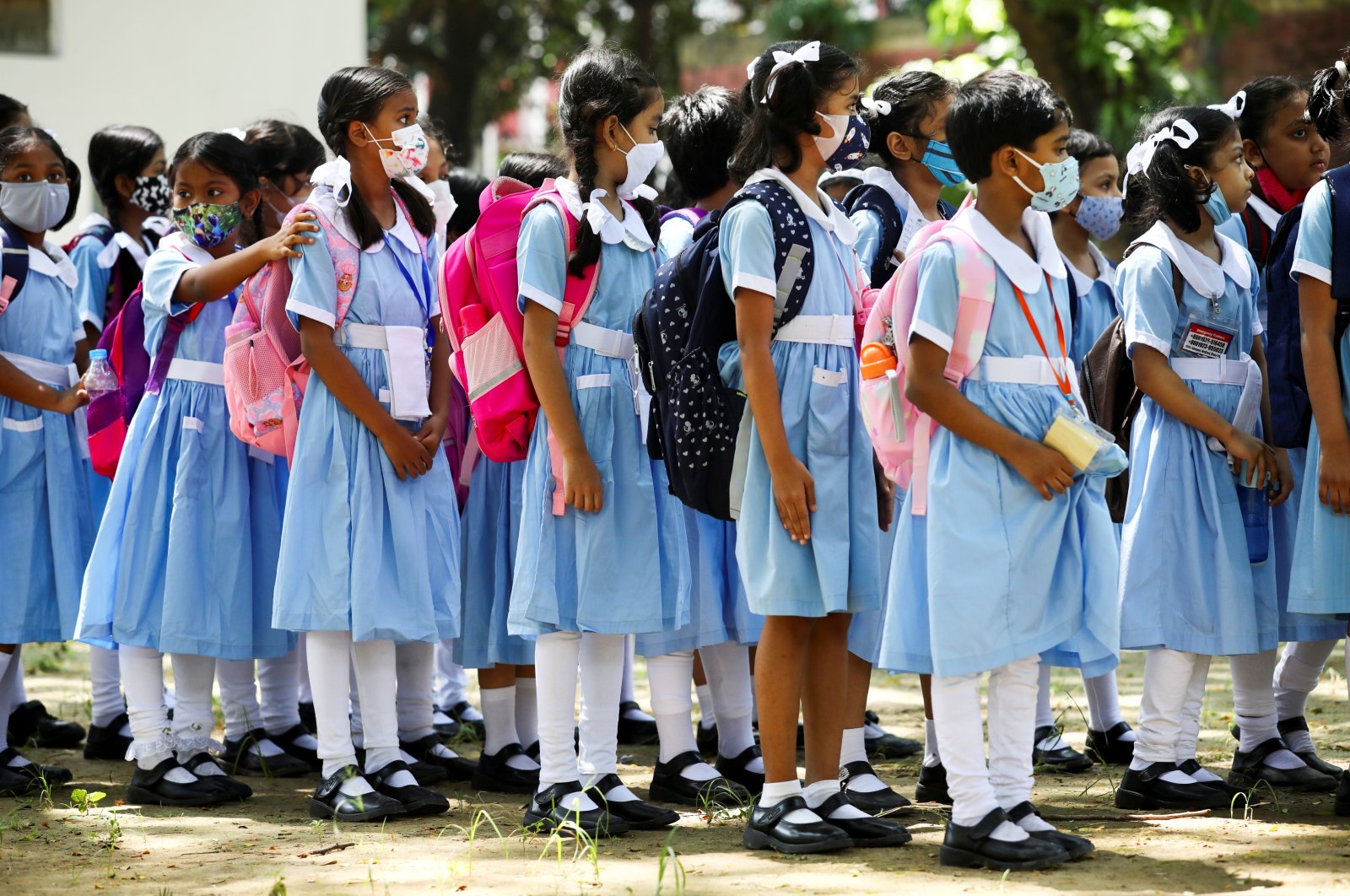 Students stand in queues after school hours at the Viqarunnisa Noon School & College after the government has withdrawn restrictions on educational institutions following a decrease in the number of cases of coronavirus disease (COVID-19) in Dhaka, Bangladesh, Sept. 12, 2021. (Reuters Photo)
by French Press Agency - AFP Sep 12, 2021 12:20 pm
RECOMMENDED

Bangladesh has reopened schools, with kids flooding back into classrooms Sunday, after 18 months, one of the world's longest coronavirus shutdowns.

The resumption came after UNICEF warned that prolonged school closures during the COVID-19 crisis were worsening inequities for millions of children across South Asia.

In the capital Dhaka, students at one school were welcomed with flowers and sweets, and told to wear masks and sanitize their hands. Some hugged each other in excitement.

"We are really excited to be back at school," 15-year-old Muntasir Ahmed told Agence France-Presse (AFP) as he entered the campus.

"I am hoping to physically see all of my friends and teachers, not through a laptop window today."

At the gate, school officials checked the body temperatures of students before allowing them to enter.

The school's vice-principal, Dewan Tamziduzzaman, said he "didn't expect such a big number to be turning up on the first day."

Only 41% of Bangladesh's 169 million population have smartphones, according to the country's telecom operators' association, which means millions of children cannot access online classes.

Even with smartphones, students in many of Bangladesh's rural districts do not have the high-speed internet access usually required for e-learning.

UNICEF warned in a report released Thursday that the pandemic has accentuated "alarming inequities" for more than 430 million children in the region.

"School closures in South Asia have forced hundreds of millions of children and their teachers to transition to remote learning in a region with low connectivity and device affordability," UNICEF's regional director, George Laryea-Adjei, said in a statement.

"As a result, children have suffered enormous setbacks in their learning journey."

In India, 80% of children aged 14-18 years said they learned less than when they were in a physical classroom, according to UNICEF.

Among children aged between six and 13 years, 42% said they had no access to remote learning.

"Their future is at stake," Deepu Singh, a farmer in India's Jharkhand state, said last week of his children aged nine and 10.

The pair have not been to school in a year and have no internet access at home, Singh told AFP, adding: "I do not know English. I cannot help him (my son), even if I want to."

Students in the rest of the region were similarly impacted, UNICEF reported.

In Pakistan, 23% of young children had no access to any device for remote learning.

Some towns in Nepal have been broadcasting radio lessons due to the lack of internet access.

"If the pandemic continues and the academic sector loses more years, what kind of human resource will the country have in the future?"