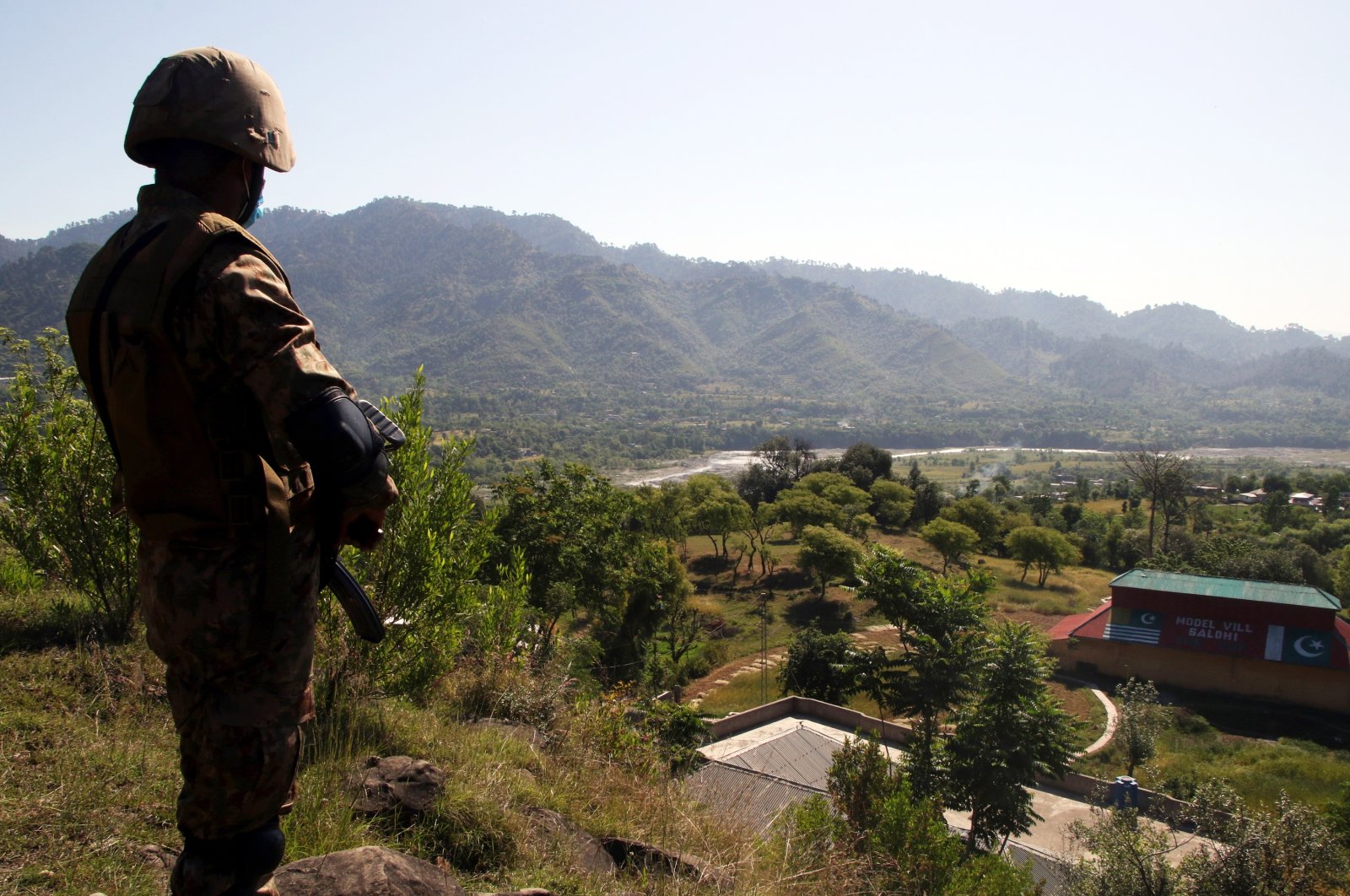 A Pakistani Army soldier stands near a house that was damaged in cross border shelling before the cease-fire, in Salohi village, Poonch district near the Line of Control, Pakistani administered Kashmir, April 26, 2021. (EPA Photo)
by French Press Agency - AFP Apr 27, 2021 10:57 am
RECOMMENDED

An uneasy truce announced earlier this year in conflict-torn Kashmir has brought relative relief to local residents, however, fears that fighting may erupt again soon are still alive.

The guns have gone silent, schools have reopened and the bunkers are empty along Pakistan's restive cease-fire line with India.

For months, a precarious peace has been welcomed by conflict-wary Kashmiris along the Line of Control (LoC) – the boundary that divides the disputed region between Pakistan and India.

The surprise truce announced late February brought an end to years of violence along the frontier that saw thousands of skirmishes rattle the Himalayan territory, where the two sides have used artillery, mortars and small arms.

"Life before the cease-fire was very miserable," Kashif Hussain, the deputy commissioner of Poonch district in Pakistani Kashmir, told reporters on a military-escorted visit to the area.

But education has since resumed, health facilities reopened and people can move around, he said, providing "a very positive effect on the psychological life of the people."

The deal effectively reinstated an earlier cease-fire signed by the two sides in 2003 that had been trampled by thousands of violations in recent years.

Pakistan's military said the original deal had largely held until 2016, when tensions exploded in Indian-administered Kashmir, resulting in a surge in violence between the two sides.

As fighting along the LoC raged, ties between the rivals went into freefall with India repeatedly accusing Pakistan of sending infiltrators across the frontier, while Islamabad lambasted Prime Minister Narendra Modi's government for stoking Hindu nationalist sentiment against Muslims.

The two sides came close to another all-out war after an attack by a Pakistan-based militant group inside Indian Kashmir in 2019 led to tit-for-tat airstrikes.

Even after stepping back from the brink, fighting along the LoC escalated, reaching an apex last year with thousands of clashes reported.

However, the damage from the coronavirus pandemic and slowing economies in both countries – along with a geopolitical tug of war – appears to have convinced India and Pakistan to halt for the time being.

"Both countries have an interest in cooling tensions right now," said Myra MacDonald, the author of multiple books on the conflict.

"Because of COVID-19, but also because India faces problems on its disputed frontier with China, while Pakistan has to address both its own economic difficulties and the fallout of the U.S. withdrawal from Afghanistan."

The truce appears to be holding, with the Pakistan military telling Agence France-Presse (AFP) there had been "no significant" cease-fire violations since the deal was signed.

For residents living near the cease-fire line, the end of fighting has brought back a sense of normality after years of strife.

"Schools were closed. Kids who used to go to mosques also got confined to their houses," said Tooba Imitiaz, who fled her home two years ago but recently resettled in Poonch.

"There were a lot of psychological problems. Our children would start shouting 'mortar, mortar' when they even hear a small thud."

The Pakistan military said about 1.5 million residents live along the cease-fire line under their control, where they have long relied on a network of community bunkers and homemade shelters to weather the perennial bouts of unrest over the years.

The ridges and valleys bisected by the LoC continue to host tens of thousands of troops armed with heavy weapons, with some outposts between the rivals just a few dozen meters apart.

But even as fighting has come to a halt, residents said they are still wary of the deal – and fear fighting could flare at any time.

"We think it is temporary," said Sameer Begum, 60, who has lived most of her life in the shadow of the LoC.