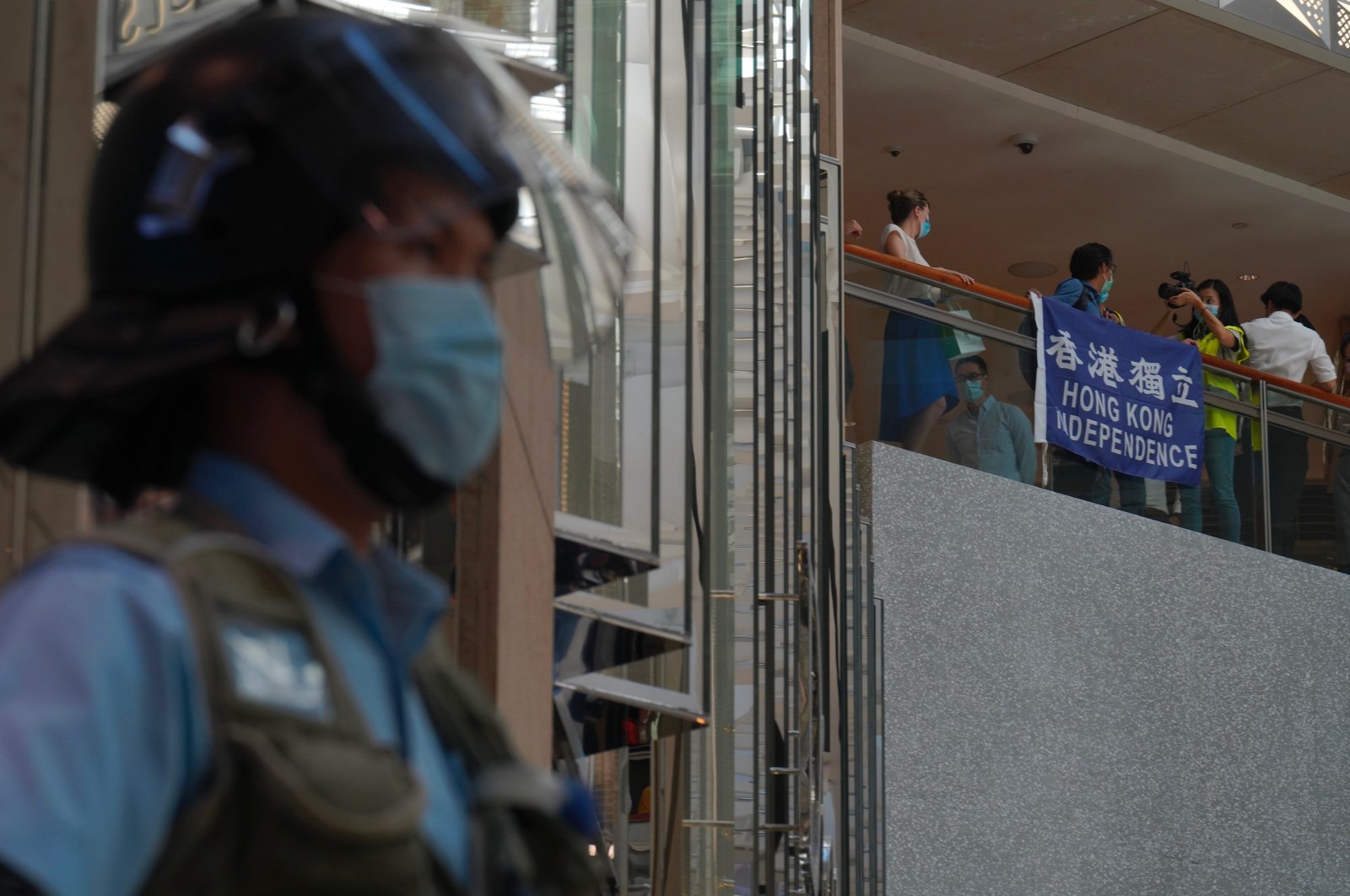 A police officer stands guard as protesters gather at a shopping mall in Central during a pro-democracy protest against Beijing's national security law in Hong Kong, June 30, 2020. (AP Photo)
by ASSOCIATED PRESS Jun 30, 2020 9:21 am
RECOMMENDED

China has approved a contentious law that would allow authorities to crack down on subversive and secessionist activity in Hong Kong, sparking fears that it would be used to curb opposition voices in the semi-autonomous territory.

Tam Yiu-Chung, Hong Kong’s sole representative to the Standing Committee of the National People’s Congress, confirmed to reporters Tuesday that the law had been passed. He said punishments would not include the death penalty but did not elaborate on further details such as whether the law could be applied retroactively.

"We hope the law will serve as a deterrent to prevent people from stirring up trouble," Tam said in the interview. "Don’t let Hong Kong be used as a tool to split the country."

Before the decision was announced Hong Kong leader Carrie Lam declined to comment on the law at a weekly meeting with reporters, saying it was inappropriate for her to do so while the Standing Committee was still meeting.

She did say once the law is passed, "the Hong Kong government will announce it and promulgate it for implementation here and then I and my senior officials will do our best to respond to everyone’s questions, especially regarding the enforcement of this national law."

The legislation is aimed at curbing subversive, secessionist and terrorist activities, as well as foreign intervention in the city’s affairs. It follows months of anti-government protests that at times descended into violence in Hong Kong last year.

The law has met with strong opposition within Hong Kong and condemnation from former colonial ruler Britain, the U.S., the European Union and others.

Human rights groups have warned the law could target opposition politicians seen as insufficiently loyal to Beijing for arrest or disqualification from running in September elections for the Legislative Council.

Ahead of the announcement, the Trump administration said Monday it will bar defense exports to Hong Kong and will soon require licenses for the sale of items to Hong Kong that have both civilian and military uses.

The administration has warned for weeks that if the law was passed, it would take action to end special U.S. trade and commercial preferences Hong Kong had enjoyed since reverting to Chinese rule in 1997.

"The United States is forced to take this action to protect U.S. national security,” Secretary of State Mike Pompeo said in a statement. "We can no longer distinguish between the export of controlled items to Hong Kong or to mainland China. We cannot risk these items falling into the hands of the People’s Liberation Army, whose primary purpose is to uphold the dictatorship of the (ruling Communist Party) by any means necessary.”

The U.S. Senate on Thursday unanimously approved a bill to impose sanctions on businesses and individuals – including the police – that undermine Hong Kong’s autonomy or restrict freedoms promised to the city’s residents.

Britain says it could offer residency and possible citizenship to around 3 million of Hong Kong’s 7.5 million people.

China has denounced all such moves as gross interference in its internal affairs and foreign ministry spokesperson Zhao Lijian on Monday said Beijing has decided to retaliate with visa restrictions on "U.S. personnel who perform badly on Hong Kong related issues.”

China decided to use the National People’s Congress to enact the legislation after opposition within Hong Kong’s Legislative Council and within society as a whole made it impossible to pass at the local level.

The law is seen as the most significant erosion to date of Hong Kong’s British-style rule of law and a high degree of autonomy that China promised Hong Kong would enjoy at least through 2047 under the "one country, two systems" framework.

Passage of the legislation will also allow the central government in Beijing to set up a national security office in Hong Kong to collect and analyze intelligence and deal with criminal cases related to national security.