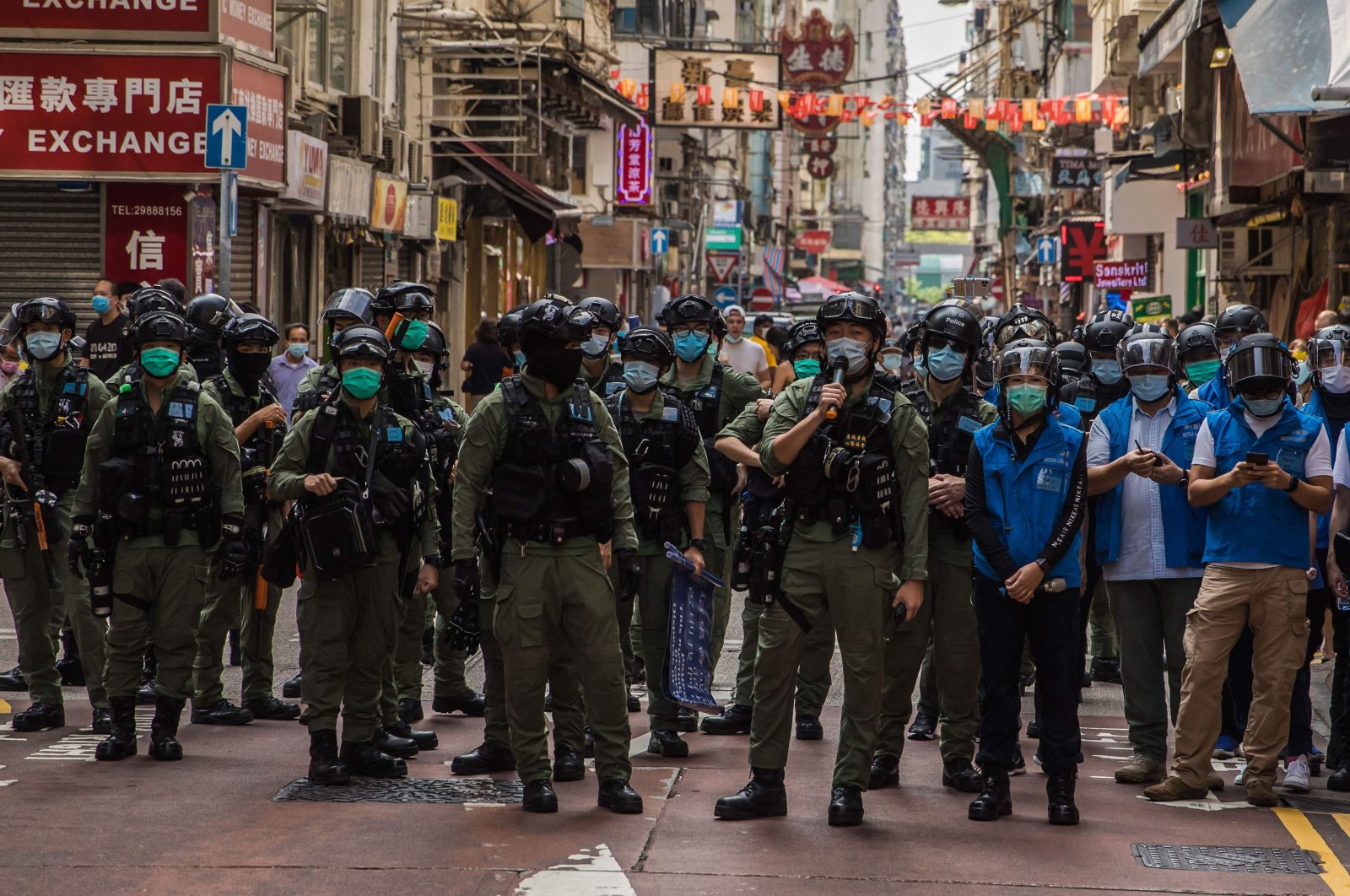 Police patrol the area after protesters called for a rally in Hong Kong to protest against the government's decision to postpone the legislative council election due to the COVID-19 pandemic, and the national security law, in Hong Kong, Sept. 6, 2020. (AFP Photo)
by ASSOCIATED PRESS Aug 06, 2021 9:05 am
RECOMMENDED

China on Friday lambasted a U.S. offer of a temporary "safe haven" to people from Hong Kong as a "vain attempt to stigmatize" the semi-autonomous city and the Chinese government.

The statement from the Chinese foreign ministry’s office in Hong Kong came hours after U.S. President Joe Biden made the offer in response to Beijing’s increasing moves to tighten its control and crush the prodemocracy opposition.

Biden signed a memorandum allowing people from Hong Kong currently residing in the U.S. to live and work in the country for 18 months, in direct response to Hong Kong’s sweeping new national security law and other measures that undercut the rights promised when the former British colony was handed back to China in 1997. It also comes as China and the U.S. are at odds over a range of foreign policy and trade issues.

The U.S. was "weaving lies and slandering Hong Kong’s national security laws, blatantly beautifying the anti-China chaos in Hong Kong, and presumptuously offering the so-called 'safe haven,'" the ministry said. "It is a vain attempt to stigmatize Hong Kong, stigmatize China, and stop at nothing to undermine Hong Kong through petty actions."

The people of Hong Kong and China would respond to such "shameless political manipulation" that is "doomed to failure," said the statement, attributed to an unidentified spokesperson and posted on the office's website.

The safe haven offer is the latest in a series of steps taken by the U.S. administration in response to Beijing's crackdown, including suspending an extradition treaty with the territory and other special treatment not extended to the rest of China, along with imposing visa bans on Hong Kong and Chinese officials and cutting them off from the U.S. financial system.

"Given the politically motivated arrests and trials, the silencing of the media, and the diminishing space for elections and democratic opposition, we will continue to take steps in support of people in Hong Kong," White House press secretary Jen Psaki said.

China imposed the national security law on Hong Kong in response to months of pro-democracy street protests in 2019. Police have arrested at least 100 opposition politicians, activists and demonstrators, imposed severe limits on political speech, reorganized the local legislature to ensure an overwhelming pro-Beijing majority and demanded that anyone holding public officer prove their loyalty to China.

Pro-democracy activists in exile pleaded with Congress last month to pass legislation to provide both temporary refuge and permanent refugee status in the U.S. after Hong Kong police confirmed they had a list of more than 50 people who would be arrested if they attempted to leave.

There are several thousand people from Hong Kong in the United States who would be eligible to remain and avoid being deported under what is formally known as deferred enforced departure, according to the Department of Homeland Security.

Psaki didn’t rule out extending refuge beyond 18 months depending on developments in Hong Kong.