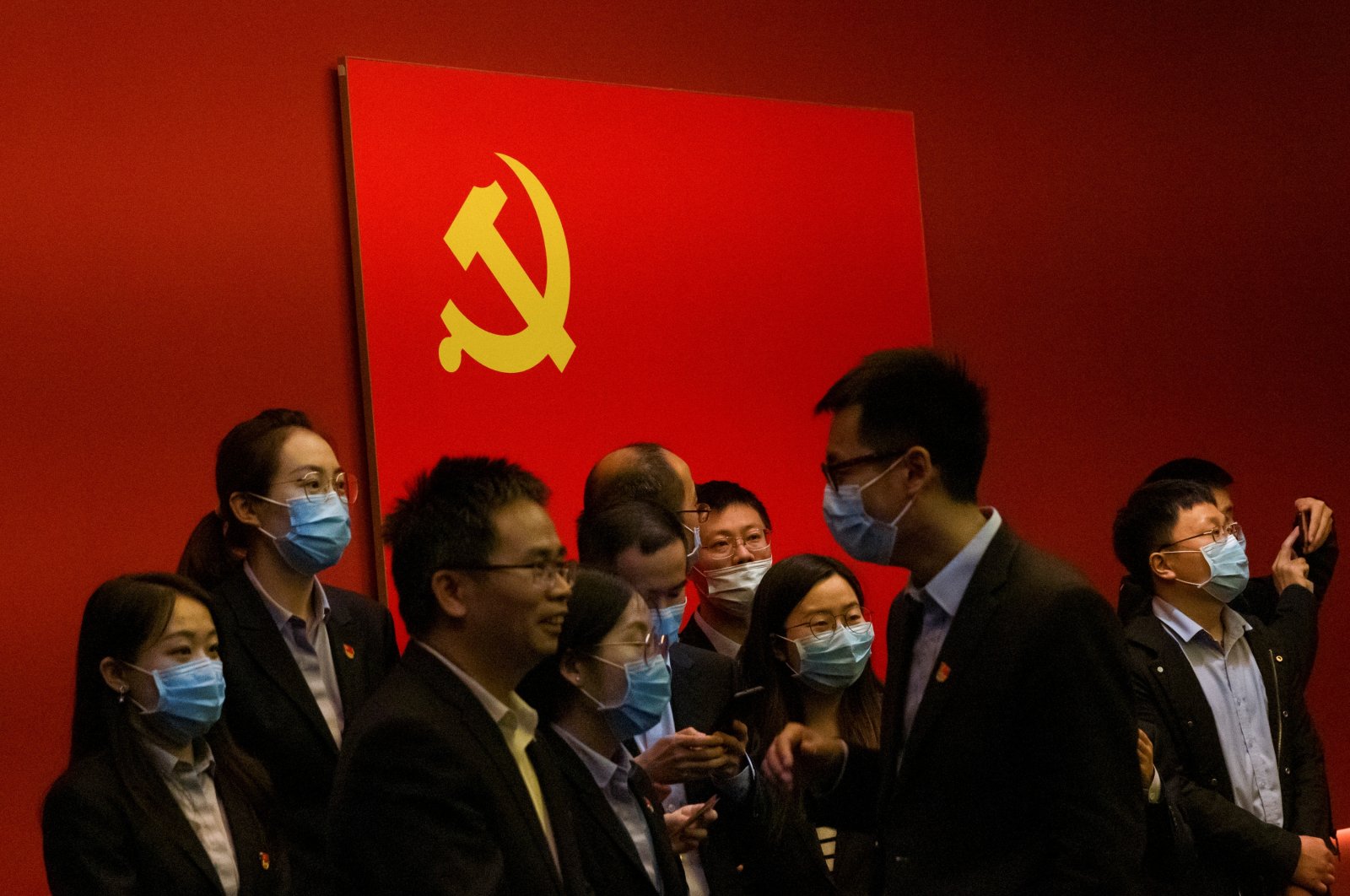 People stand in front of the Chinese national flag at an exhibition marking the 100th founding anniversary of the Chinese Communist Party (CCP) in Beijing, China, April 22, 2021. REUTERS/Thomas Peter
by Agencies
Apr 29, 2021 1:03 pm

In its first reaction to U.S. President Joe Biden's first address to Congress, Beijing warned Washington on Thursday against imposing its democratic ideals, while criticizing trade sanctions and military moves in China's backyard.

The remarks came after Biden's first address to Congress, in which the U.S. leader placed a renewed focus on diplomacy and said the country was in competition with China and others to win the 21st century.

Biden added that "autocrats think democracies can't compete" while noting the U.S. welcomes competition and is not looking for conflict.

Asked about the speech, Chinese Foreign Ministry Spokesperson Wang Wenbin said it was normal for the U.S. and China to compete in some areas.

"But this kind of competition should be a track and field race, not a duel to the death," he told a regular press briefing on Thursday.

In his speech, President Biden also said the U.S. would stand up to unfair trade practices such as subsidies for state-owned enterprises and intellectual property theft.

But China lashed out a day later at the U.S. for "violating the market principle of fair competition" and "politicizing" issues such as the economy, trade and technology, in reference to the trade war between both countries in recent years.

"China is committed to developing a relationship with the U.S. based on non-conflict and non-confrontation," Wang said.

While Biden said he told Chinese President Xi Jinping the U.S. would maintain a strong military presence in the Indo-Pacific to prevent conflict – just as it did with NATO in Europe – China highlighted issues with U.S. deployments in the region.

China's Defense Ministry Spokesperson Wu Qian added in a separate statement Thursday that, since the inauguration of the current U.S. government, the frequency of U.S. warships sent to China's maritime territory increased by 20% from last year.

The frequency of reconnaissance aircraft activity in the region also increased by 40%, Wu added, saying that China "resolutely opposes this."

"The U.S. frequently sends warships and planes to carry out activities in maritime waters and airspace near China, advancing regional militarization and threatening regional peace and stability," he said.

As an example, Wu said the Navy destroyer USS Mustin recently conducted a close-in observation of the Chinese aircraft carrier Liaoning and its battle group.

That had “seriously interfered with the Chinese side’s training activities and seriously threatened the safety of navigation and personnel on both sides,” Wu said. The ship was warned to leave and a formal protest was filed with the U.S., he said.

China routinely objects to the U.S. military presence in the South China Sea, which it claims almost in its entirety, as well as the passage of Navy ships through the Taiwan Strait.

The country recently marked the 20th anniversary of the collision between a U.S. surveillance plane and a Chinese navy fighter near the Chinese island province of Hainan that resulted in the Chinese pilot's death. He was called a hero who sacrificed himself for the defense of the motherland. The U.S. says its plane was in international airspace and the accident was the result of reckless flying by the Chinese side.

Wu also blasted moves to beef up the monitoring of Chinese aircraft movements by Taiwan, the self-governing island democracy claimed by China as its own territory, to be annexed by force if necessary.

Efforts by Taiwan's government to stave off what China refers to as inevitable unification are like “a mantis trying to stop a chariot," Wu said.

The U.S. maintains only unofficial relations with Taiwan in deference to Beijing, but provides the island with defensive weapons and is legally bound to treat threats to it as matters of “grave concern." Increased activity by the Chinese military around Taiwan has been raising concern about the possibility of a conflict.