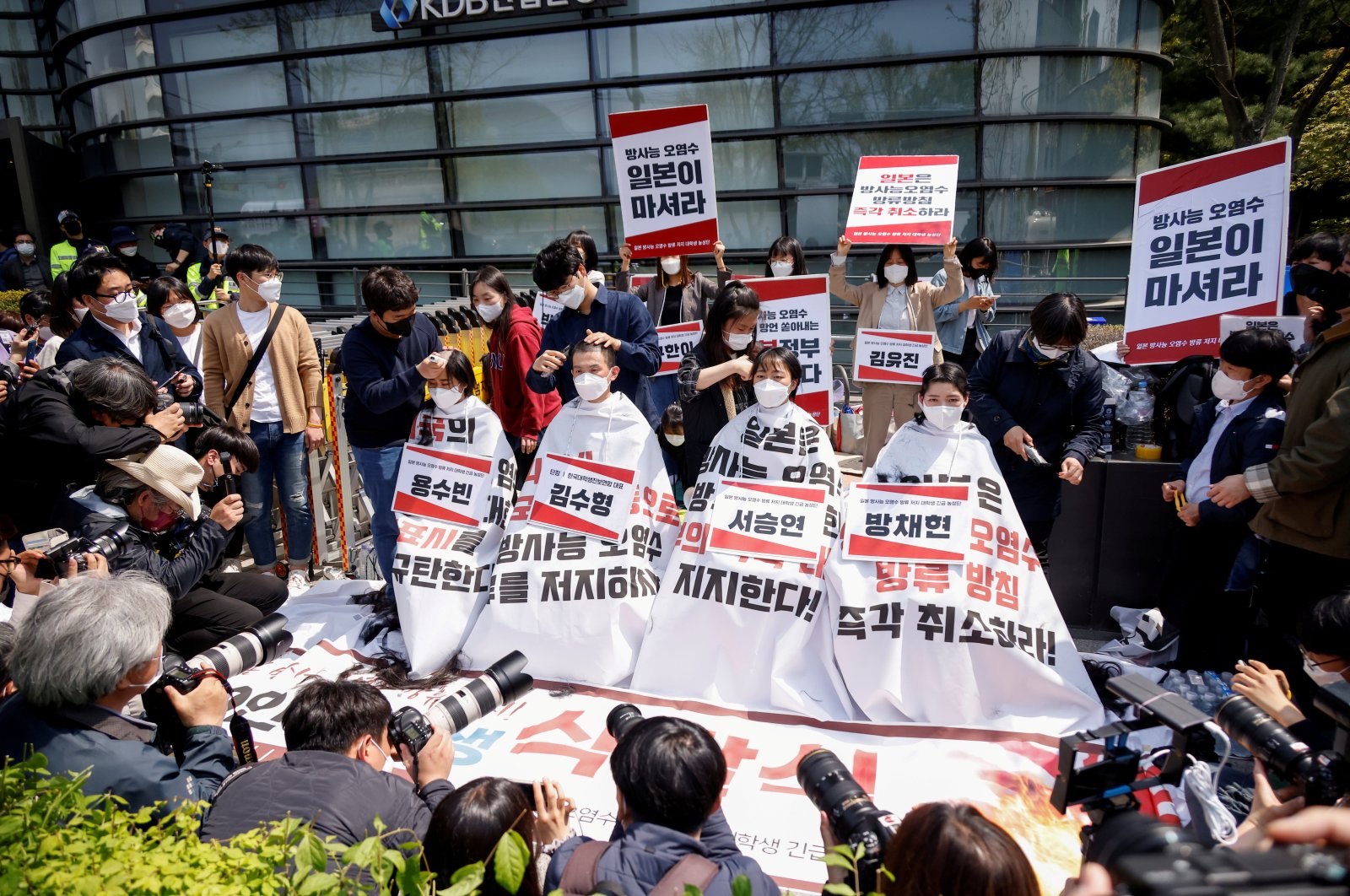 South Korea university students get their heads shaved during a protest against Japan's decision to release contaminated water from its crippled Fukushima nuclear plant into the sea, in front of the Japanese embassy, in Seoul, South Korea, April 20, 2021. (REUTERS Photo)
by REUTERS Apr 28, 2021 1:01 pm
RECOMMENDED

China and Japan launched reciprocal accusations of inappropriate behaviour after a Chinese government official posted a tweet of an iconic Japanese woodblock print manipulated to show nuclear waste being poured into the sea, launching a new diplomatic spat.

Earlier this month, Japan said it would release into the sea contaminated water from the crippled Fukushima nuclear power plant, angering its neighbors. China said the plan was "extremely irresponsible."

On Monday, Zhao Lijian, a Chinese foreign ministry spokesperson, tweeted an image of "The Great Wave Off Kanagawa" made in the 19th century by artist Hokusai, altered to show green nuclear waste being poured into the sea by two people in orange Hazmat suits from a boat.

In the image, created by a Chinese illustrator, Mount Fuji in the background was replaced by a nuclear plant cooling tower.

Japanese Foreign Minister Toshimitsu Motegi, when asked about the tweet at a news conference on Tuesday, said he would not comment on every tweet "by someone at the press secretary level."

But he said Japan was lodging a "forceful protest" and seeking the tweet's removal through diplomatic channels.

"You asked if I will delete the tweet and apologize. You may have noticed, I have pinned the tweet at the top," Zhao said at a regular press briefing in Beijing on Wednesday.

"The illustration shows the righteous call of the people. It is the Japanese government which needs to revoke its wrong decision and apologize," Zhao said.

On Wednesday, when asked again about the tweet by an opposition lawmaker in Japan's parliament, Motegi said that "such heartless tweets should not be allowed", according to Kyodo News.

"Japan did a bad thing, yet can't let others talk about it?" Zhao said.

"The whole world has been protesting for a while now, some Japanese officials play dumb and pretended not to hear, yet they get so worked up over an illustration."

The bitter exchanges came on the heels of Chinese anger at a recent statement by U.S. President Joe Biden and Japanese Prime Minister Yoshihide Suga, who jointly agreed to face down China over a range of issues from Taiwan to Muslim Uyghurs in the far western Chinese region of Xinjiang.