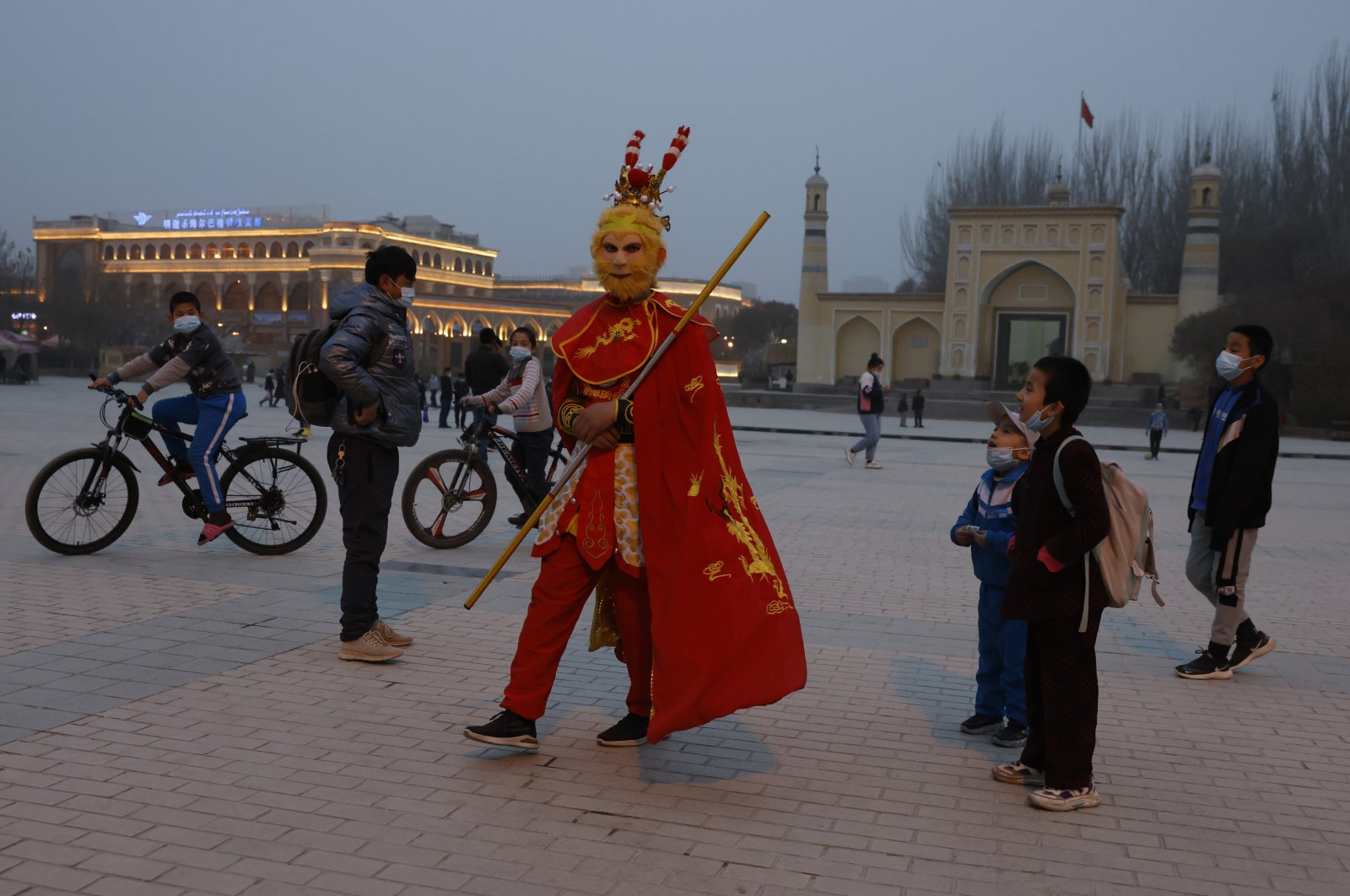 A performer dressed as the monkey god from a Chinese fable walks near a mosque as Uyghur children gaze upon him in Kashgar, Xinjiang Uyghur Autonomous Region, China, March 19, 2021. (AP Photo)
by ASSOCIATED PRESS
Oct 10, 2021 12:00 pm

As China seeks to reassure the West that human rights abuses against the Uyghur Muslim minority in the northwestern Xinjiang region are in the past by taking a team of foreign journalists to the restricted area, the repression of conscience could be seen with the unaided eye even without the razor wire and surveillance cameras

The razor wire that once ringed public buildings in China’s far northwestern Xinjiang region is nearly all gone. Gone, too, are the middle school uniforms in military camouflage and the armored personnel carriers rumbling around the homeland of the Uyghurs.

Gone are many of the surveillance cameras that once glared down like birds from overhead poles, and the eerie eternal wail of sirens in the ancient Silk Road city of Kashgar. Uyghur teenage boys, once a rare sight, now flirt with girls over pounding dance music at rollerblading rinks.

Four years after Beijing launched a brutal crackdown that swept up to a million or more Uyghurs and other mostly Muslim minorities into detention camps and prisons, its control of Xinjiang has entered a new era. Chinese authorities have scaled back many of the most draconian and visible aspects of the region’s high-tech police state.

The panic that gripped the region a few years ago has subsided considerably, and a sense of normalcy is creeping back in. But there is no doubt about who rules, and evidence of the terror of the last four years is everywhere.

It’s seen in Xinjiang’s cities, where many historic centers have been bulldozed and the call to prayer no longer rings out. It’s seen in Kashgar, where one mosque was converted into a cafe, and a section of another has been turned into a tourist toilet. It’s seen deep in the countryside, where Han Chinese officials run villages. And it’s seen in the fear that was ever-present, just below the surface.

It’s hard to know why Chinese authorities have shifted to subtler methods of controlling the region. It may be that searing criticism from the West, along with punishing political and commercial sanctions, have pushed authorities to lighten up. Or it may simply be that China judges it has come far enough in its goal of subduing the Uyghurs and other mostly Muslim minorities to relax its grip.

Uyghur activists abroad accuse the Chinese government of genocide, pointing to plunging birthrates and mass detentions. The authorities say their goal is not to eliminate Uyghurs but to integrate them and that harsh measures are necessary to curb extremism. Regardless of intent, one thing is clear: Many of the practices that made the Uyghur culture a living thing – raucous gatherings, heated debate – have been restricted or banned.

In their place, the authorities have crafted a sterilized version, one ripe for commercialization. Xinjiang officials took The Associated Press (AP) on a tour to the Grand Bazaar in the center of Urumqi, which has been rebuilt for tourists, like many other cities in Xinjiang. Here, there are giant plastic bearded Uyghur men and a giant plastic Uyghur instrument. A nearby museum for traditional naan bread sells tiny plastic naan keychains, Uyghur hats and fridge magnets. Crowds of Han Chinese snap selfies.

China has long struggled to integrate the Uyghurs, a historically Muslim group of 13 million people with close linguistic, ethnic and cultural ties to Turkey.

Since the Communist Party took control of Xinjiang in 1949, Beijing’s leaders have debated whether stricter or softer measures are more effective in absorbing the vast territory, half the size of India.

For decades, policy in Xinjiang swung back and forth. Even as the state granted special benefits to minorities, such as hiring quotas and extra points on entrance exams, glass ceilings, racism and restrictions on religion alienated and angered many Uyghurs.

The harder the government tried to control the Uyghurs, the more stubbornly many clung to their identity. A few resorted to violence against a state they believed would never accord them genuine respect. Hundreds of innocent civilians, both Han Chinese and Uyghur, perished in increasingly deadly attacks.

The debate ended soon after President Xi Jinping’s rise to power in 2012. The state chose forced assimilation, detaining Uyghurs and other minorities indiscriminately by the thousands and branding them as suspected "terrorists."

Today, many checkpoints and police stations are gone and the bombings have stopped, but the racial divide remains clear. Uyghurs live trapped in an invisible system that restricts their every move. It’s near impossible for them to get passports, and on planes to and from Xinjiang, most passengers are from China’s Han Chinese majority.

Uyghurs who live outside Xinjiang must register with local police and report to an officer on a regular basis, their moves tracked and monitored. Many Uyghurs living in Xinjiang aren’t allowed to leave the region.

Information on Xinjiang within China is heavily censored, and state media now promotes the region as a safe, exotic tourist destination. As a result, Han Chinese outside Xinjiang remain largely unaware of the restrictions that Uyghurs face, one of a number of reasons why many in China are supportive of Beijing’s crackdown.

Within Xinjiang, Han Chinese and Uyghurs live side by side, an unspoken but palpable gulf between them. In the suburbs of Kashgar, a Han woman at a tailor shop tells AP that most Uyghurs weren’t allowed to go far from their homes.

"Isn’t that so? You can’t leave this shop?” the woman said to an Uyghur seamstress.

In rural villages and quiet suburbs, many houses sit empty and padlocked. In one Kashgar neighborhood, the words "Empty House” are spray-painted on every third or fourth residence. In a village an hour’s drive away, dozens of "Empty House” notices on a half-hour walk, red lettering on yellow slips fluttering in the wind on doors upon doors.

Control is also tighter deep in the countryside, away from the bazaars that the government is eager for visitors to see. In one village we stop in, an elderly Uyghur man in a square skullcap answers just one question – "We don’t have the coronavirus here, everything is good” – before a local Han Chinese cadre demands to know what we are doing. He tells the villagers in Uyghur, "If he asks you anything, just say you don’t know anything.”

Controls on religious activity have slackened, but remain tightly bound by the state. For example, the authorities have allowed some mosques to reopen, though hours are strictly limited. Small groups of elderly worshippers trickle in and out.

The most heavily criticized aspect of Xinjiang’s crackdown has been its so-called "training centers,” which leaked documents show are actually extrajudicial indoctrination camps. After a global outcry, Chinese officials declared the camps shuttered in 2019. Many indeed appear to be closed.

On the state-led tour in April, Chinese authorities took the AP team to what they said was once a "training center,” now a regular vocational school in Peyzawat County. A mere fence marks the campus boundaries – a stark contrast from the barbed wire, high watchtowers and police at the entrance we saw three years ago.

Three other sites that once appeared to be camps are now apartments or office complexes. But in their place, permanent detention facilities have been built, in an apparent move from makeshift camps to a long-lasting system of mass incarceration. AP encountered one massive facility driving along a country road, its walls rising from the fields, men visible in high guard towers.

At a second, the AP team was blocked by two men wearing epidemic-prevention gear. A third ranks among the largest detention facilities on earth. Many are tucked away behind forests or dunes deep in the countryside, far from tourists and city centers.

In Urumqi, at an anti-terrorism exhibition in a vast, modernist complex near glass office towers and freshly-laid highways, the Chinese authorities have rewritten history.

Though Xinjiang has cycled in and out of Chinese control, and was independent as recently as the 1700s and also briefly in the last century, the territory’s past is casually dismissed.

"Although there were some kingdoms and khanates in Xinjiang in the past, they were all local regimes within the territory of China,” one display says. It’s written in English and Chinese. No Uyghur script is seen anywhere in the exhibit. Guns and bombs sit in glass cases, ones the exhibit says were confiscated from "extremists."

Officials dodge questions about how many Uyghurs were detained, though statistics showed an extraordinary spike in arrests before the government stopped releasing them in 2019. Instead, they say that they’ve engineered the perfect solution to terrorism, protecting Uyghur culture rather than destroying it.