China doubles down on Uyghur Muslims with harsh prosecutions: HRW 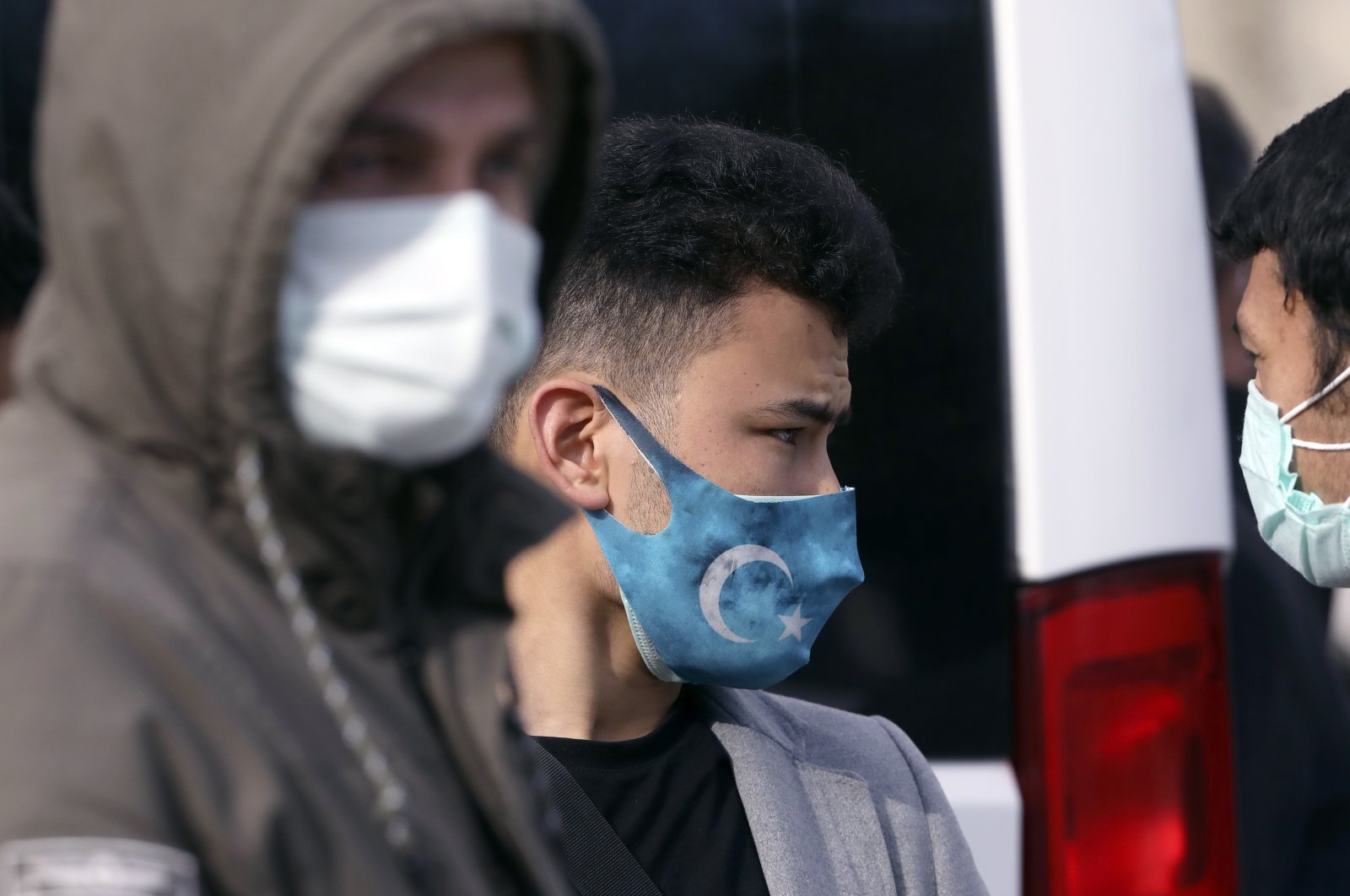 Uyghur protesters watch their friends holding photographs of relatives they say they have not heard from in years, near the Chinese Embassy in the capital Ankara, Turkey, Feb. 9, 2021. (AP Photo)
by DAILY SABAH WITH AGENCIES Feb 24, 2021 9:08 am

The New York-based Human Rights Watch alongside governments of several countries cracked down on China this week, accusing Chinese authorities of committing serious human rights violations against Muslim minorities in the country's western region of Xinjiang

A prominent human rights organization has called on the international community to condemn Beijing for crushing civil liberties in the Chinese western region of Xinjiang, while its policies against Uyghur Muslims and ethnic Turkic minorities amounted to "genocide" in several countries.

The Human Rights Watch (HRW) said Wednesday that China has dramatically increased its prosecution of Muslim minorities in Xinjiang through the formal court system, handing out long prison terms for dubious charges such as "picking quarrels" and giving gifts to overseas relatives. These criminal convictions are in addition to the detention of an estimated 1 million Uyghurs and other mainly Muslim minorities in "political education" camps in Xinjiang.

More than 250,000 people in the northwestern region have been formally sentenced and imprisoned since 2016, according to HRW.

"Despite the veneer of legality, many of those in Xinjiang's prisons are ordinary people who were convicted for going about their lives and practicing their religion," HRW researcher Maya Wang said in a statement, according to Agence France-Presse (AFP).

HRW said criminal sentences in the region had spiked between 2017 and 2019 during a crackdown on Uyghurs and other mainly Muslim minorities. Xinjiang courts sentenced nearly 100,000 people in 2017, up from less than 40,000 in 2016, the organization said, citing government data.

The rights group said police, prosecutors and courts had been placed under pressure to "deliver swift and harsh punishment" in the name of counterterrorism, causing many to be imprisoned without committing any genuine offense.

Sentences were handed out for activities including "telling others 'what is haram and halal'" and bringing gifts to relatives in Turkey, HRW said, noting that prison terms have also grown longer. Prior to 2017, around 11% of the sentences carried prison terms of over five years. In 2017, 87% did.

China's treatment and incarceration of Muslim minorities in Xinjiang, which includes accusations of forcibly sterilizing women and imposing a regime of forced labor, has drawn a growing chorus of international condemnation.

After initially denying the existence of camps in Xinjiang, Beijing later defended them as vocational training centers aimed at reducing the appeal of extremism. Foreign Minister Wang Yi said Monday that Beijing's treatment of ethnic minorities in Xinjiang was a "shining example" of China's human rights progress.

The Xinjiang region is home to around 10 million Uyghurs. The Turkic Muslim group, which makes up around 45% of Xinjiang's population, has long accused Chinese authorities of cultural, religious and economic discrimination. About 7% of the Muslim population in Xinjiang has been incarcerated in an expanding network of "political reeducation" camps, according to U.S. officials and U.N. experts. Over 380 suspected detention facilities have been identified in the Xinjiang region, the Australian Strategic Policy Institute (ASPI) reported last year.

The U.S. State Department has said China's actions in Xinjiang amount to genocide, while Canadian lawmakers on Tuesday passed a similar declaration.

"A genocide is currently being carried out against the Uyghur and other Turkish Muslims," said the motion that was passed by the Canadian Parliament in 266-0 vote. The Parliament also voted 229-29 to lobby the Olympic committee to move the Olympics if China does not stop the genocide.

However, Prime Minister Justin Trudeau’s Cabinet abstained from the vote as he hesitated at using the word “genocide,” which Canadian leader called an “extremely loaded” term, as The Associated Press (AP) reported.

Former U.S. Secretary of State Mike Pompeo declared before he left office that China’s policies against Xinjiang’s Muslims and ethnic minorities constituted crimes against humanity and genocide. His successor, Antony Blinken, reiterated the statement on his first day in office.

"I made clear the U.S. will defend our national interests, stand up for our democratic values and hold Beijing accountable for its abuses of the international system," Blinken wrote in a Twitter post. U.S. President Joe Biden's national security adviser, Jake Sullivan, last month urged Washington to be "prepared to act, as well to impose costs, for what China is doing in Xinjiang, what it’s doing in Hong Kong, for the bellicosity and threats it is projecting towards Taiwan."

Turkey also denounces the mistreatment of Muslims in China with ruling Justice and Development Party's (AK Party) spokesperson Ömer Çelik saying that Turkey is closely following the situation in Xinjiang region. Çelik emphasized in a statement late Tuesday that the Turkish government's "utmost priority is that Uyghur Turks are treated well."

"We follow footage from the region with concern," he added. "Only way to eliminate bad news coming from region is for China to end some of its unfavorable practices against Uyghur Turks," Çelik said.

The Foreign Ministry also previously said that Turkey is concerned over the human rights situation in the western region, adding that Ankara expected Uyghurs to be treated as equal citizens of China. According to the ministry, a Turkish committee voiced Ankara’s concerns over Uighurs at the 75th United Nations General Assembly (UNGA).

"While respecting China’s territorial integrity, the expectations of our country and the international community from Chinese authorities is that Xinjiang’s Uyghur Turks and other Muslim minorities live in peace as equal citizens of China and that their cultural and religious identities are respected, as well as guaranteed," the committee said.

It was stated that Turkey, as a country with ethnic, religious and cultural ties with Uighur Turks, is monitoring reports on human rights violations against the Uyghurs and other Muslim minorities with concern.

In a separate statement, the ministry stressed once again that Turkey placed high importance on the peace, security, happiness and welfare of the Uyghur Turkic people. "Our country has a national line regarding this issue and made a national declaration within this scope," Foreign Ministry spokesperson Hami Aksoy said.