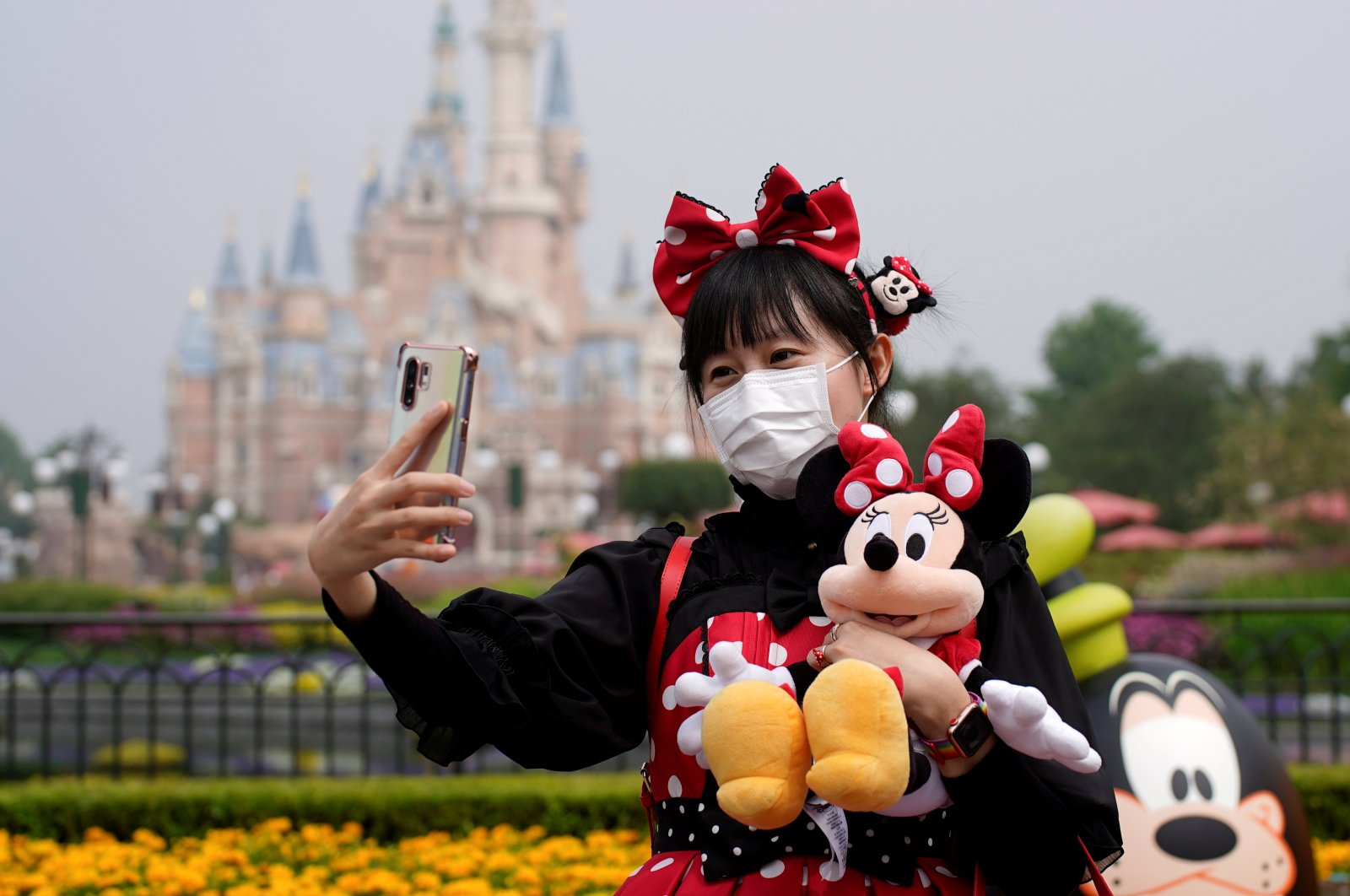 A visitor dressed as a Disney character takes a selfie while wearing a protective face mask at Shanghai Disney Resort as the Shanghai Disneyland theme park reopens following a shutdown due to the coronavirus outbreak, in Shanghai, China, May 11, 2020. (Reuters Photo)
by Compiled from Wire Services May 11, 2020 11:31 am
RECOMMENDED

China reported a new cluster of coronavirus cases in Wuhan Monday after a month without fresh infections at the pandemic's global epicenter, as a northeastern city was placed under lockdown.

The cases added to fears China could be facing a new wave of infections, even as restrictions continued to ease in some other parts of the country.

Five new infections were confirmed in one residential district of Wuhan, the central Chinese city where the virus was initially detected late last year and which emerged from its own lockdown roughly four weeks ago, following dramatically dwindling numbers.

Authorities also issued stay-at-home orders and travel bans in Shulan, a city of around 670,000 people in northeastern China, after three new infections were confirmed there.

Authorities in Wuhan imposed draconian restrictions on travel and movement in what appeared to have been a successful bid to quash the outbreak.

That lockdown eased in recent weeks as officials said the disease was under control, with travel to and from the city allowed.

But on Sunday authorities acknowledged one person had tested positive for the virus in Wuhan, followed by another five on Monday.

Local authorities said all new cases were from the same residential compound, mostly older people, and an official from the affected district has been dismissed for "insufficient" virus containment efforts.

The National Health Commission said that the seven imported cases reported on the mainland were seen in the Inner Mongolia autonomous region.

The commission also noted that in the past 24 hours no COVID-19 casualties were detected. No new deaths have been reported in the country since April 17.

On April 17 it was announced that there were 1,290 additional deaths that were not recorded due to the confusion in the first days of the outbreak.

In a stark warning of the dangers of a fresh wave after weeks of declining case numbers, a local cluster of coronavirus cases grew in Shulan.

The city's public transportation, as well as taxis and trains leaving the city, was suspended Sunday, with Jilin province raising its emergency alert to the highest level, according to state broadcaster CCTV.

Five new cases were reported Monday in the country's northeast near North Korea, which claims to have no coronavirus cases.

Despite the relative increase in the number of cases, the country continues its efforts to return to normal life.

On April 27, senior students from high schools and vocational schools started their lessons in Beijing and Shanghai. More students returned to school in Beijing on Monday.

Visitors in face masks streamed into Shanghai Disneyland as the theme park reopened Monday in a high-profile step toward reviving tourism that was shut down by the coronavirus pandemic.

The House of Mouse’s experience in Shanghai, the first of its parks to reopen, foreshadows hurdles global leisure industries might face. Disney is limiting visitor numbers, requiring masks and checking for the virus’s telltale fever.

China, where the pandemic began in December, was the first country to reopen factories and other businesses after declaring the disease under control in March even as infections rise and controls are tightened in some other countries.

“We hope that today’s reopening serves as a beacon of light across the globe, providing hope and inspiration to everyone,” the president of Shanghai Disney Resort, Joe Schott, told reporters.

Tourism has been hit especially hard by controls imposed around the world that shut down airline and cruise ship travel, theme parks and cinemas. Disney blamed a 91% plunge in its latest quarter profit on $1.4 billion in virus-related costs.

Shanghai Disneyland and Disney’s park in Hong Kong closed on Jan. 25 as China isolated cities with 60 million people to try to contain the outbreak. Tokyo Disneyland closed the following month and parks in the United States and Europe in March.

China has allowed shops and offices to reopen but is keeping cinemas, bars, karaoke parlors and other businesses closed.

Disney guests, some wearing Mickey Mouse ears, and children in Little Mermaid, Mulan, Minnie Mouse and Snow White costumes were checked Monday for fever at the park gate and then walked down nearly empty lanes as employees waved to them. The company’s signature tune, “When You Wish Upon a Star,” played over loudspeakers.

Decals on sidewalks and at lines for attractions show visitors where to stand to keep themselves separated. The company said rides will be limited to one group of visitors per car to keep strangers apart.

“We don’t want people too close – front, back or side,” said Andrew Bolstein, the park’s senior vice president for operations.

The company said its plans were based on the experience of Disneytown, an adjacent shopping and entertainment facility that reopened earlier in the 1,000-acre (400-hectare) Shanghai Disney Resort.

Advance reservations are required and visitors are assigned times to enter. The company said earlier guest numbers will be limited to one-third of the usual daily level of 80,000 at the start and will gradually increase.

“Excited about the opening of the gate!” people in the first group of guests shouted as they entered the park at 9:30 a.m.

Shanghai Disneyland, which opened in 2016, is a joint venture between Walt Disney Co. and a company owned by the Shanghai city government.

Disney has a 43% stake in the Shanghai Disney Resort, which includes the theme park, two hotels and Disneytown. The resort said earlier it attracted about 12 million guests last year and a total of 66 million since it opened.

Disney, headquartered in Burbank, California, said some outlets in Disney Springs, a shopping, dining and entertainment complex attached to the Disney World theme park in Florida will reopen this month. The company has yet to set a date for reopening Disney World or its other parks worldwide.

Visitors to Shanghai Disney are required to show government-issued identification and use a smartphone app issued by the Shanghai city government that tracks their health and contacts with anyone who might have been exposed to the virus.

That allows the company to “understand and regulate the flow of traffic,” said Bolstein.

“We hope to bring them back sometime soon,” he said.

The virus has now infected more than 4 million people worldwide claiming more than 280,000 lives and crippled the global economy.

China has faced criticism both at home and abroad for downplaying the virus and concealing information about the outbreak when it first emerged in Wuhan. Doubt has also been cast over the official toll.

Beijing has insisted it has always shared information with the World Health Organization and other countries in a timely manner.