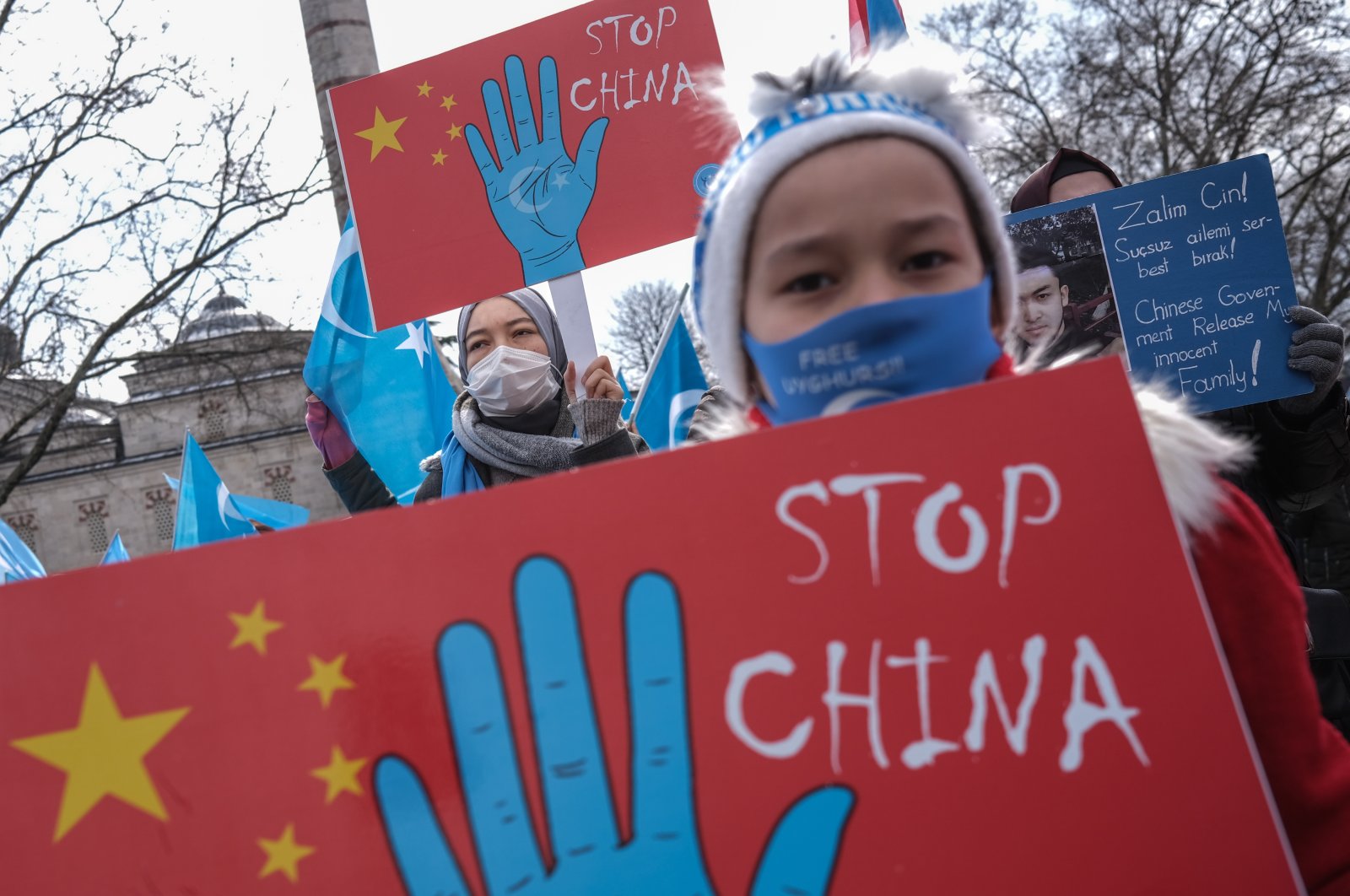 Uyghur protestors who have not heard from their families living in East Turkestan hold placards and Uyghur flags during a protest against China, in Istanbul, Turkey, March 25, 2021. (EPA Photo)
by Agencies Mar 26, 2021 9:32 am
RECOMMENDED

China on Friday announced sanctions on British individuals and entities following the U.K.’s joining the EU and others in sanctioning Chinese officials accused of human rights abuses in the Xinjiang region.

A statement from the Chinese Foreign Ministry said the move by the Western bloc was based on “nothing but lies and disinformation, flagrantly breaches international law and basic norms governing international relations, grossly interferes in China’s internal affairs, and severely undermines China-U.K. relations.”

Britain’s ambassador to China has been summoned for a diplomatic protest, the statement said. Sanctioned individuals and groups would be barred from visiting Chinese territory and banned from having financial transactions with Chinese citizens and institutions, according to The Associated Press (AP).

China's sanctions are the latest move in an increasingly bitter row over Xinjiang, where Beijing is accused of detaining more than 1 million members of Uyghur and other Muslim minority groups, engaging in forced labor and imposing coercive birth control measures.

"We condemn China's attempt to silence those highlighting human rights abuses, at home and abroad, including UK MPs and peers," British Foreign Secretary Dominic Raab said in a tweet. "While the UK joins the international community to sanction human rights abuses, Chinese govt sanctions its critics," he added, according to remarks carried by Agence France-Presse (AFP).

Raab called on Beijing to give the United Nations access to the region of Xinjiang if they "want to credibly rebut claims of human rights abuses."

Sanctioned Smith said it was "our duty to call out the Chinese government's human rights abuses in Hong Kong and their genocide of the Uyghur people. Those of us who live free lives under the rule of law must speak for those who have no voice. If that brings the anger of China down upon me then I shall wear that as a badge of honor."

"The MPs and other British citizens sanctioned by China today are performing a vital role shining a light on the gross human rights violations being perpetrated against Uyghur Muslims," Johnson tweeted. "Freedom to speak out in opposition to abuse is fundamental and I stand firmly with them."

Chinese state TV called Thursday for a boycott of Swedish retail chain H&M as Beijing lashed out at foreign clothing and footwear brands following Monday’s decision by the 27-nation European Union, the United States, Britain and Canada to impose travel and financial sanctions on four Chinese officials blamed for abuses in Xinjiang. Cotton and other agricultural products form a major component of the local economy in vast but thinly populated Xinjiang.

Companies ranging from Nike to Burberry that have well-established presences in China were also targeted online, with some Chinese celebrities announcing they were severing endorsement deals with some firms.

“China is firmly determined to safeguard its national sovereignty, security and development interests, and warns the U.K. side not go further down the wrong path. Otherwise, China will resolutely make further reactions," the Foreign Ministry said.

The Xinjiang government issued a lengthy statement touting economic growth, political stability and population increase in the region and pointing to violence and violations of human rights in the U.S., Britain, Canada and elsewhere and chaos brought by military interventions in Iraq and Libya.

“Any plot to undermine Xinjiang's prosperity and development... will certainly be doomed to shameful failure," the statement said.

South Korean retail giant Lotte saw its China business destroyed after it provided land for a U.S. air defense system that Beijing objected to, while relations with Norway had been strained for years after the Nobel Peace Prize was awarded to pro-democracy writer Liu Xiaobo. who died in a Chinese prison in 2017.