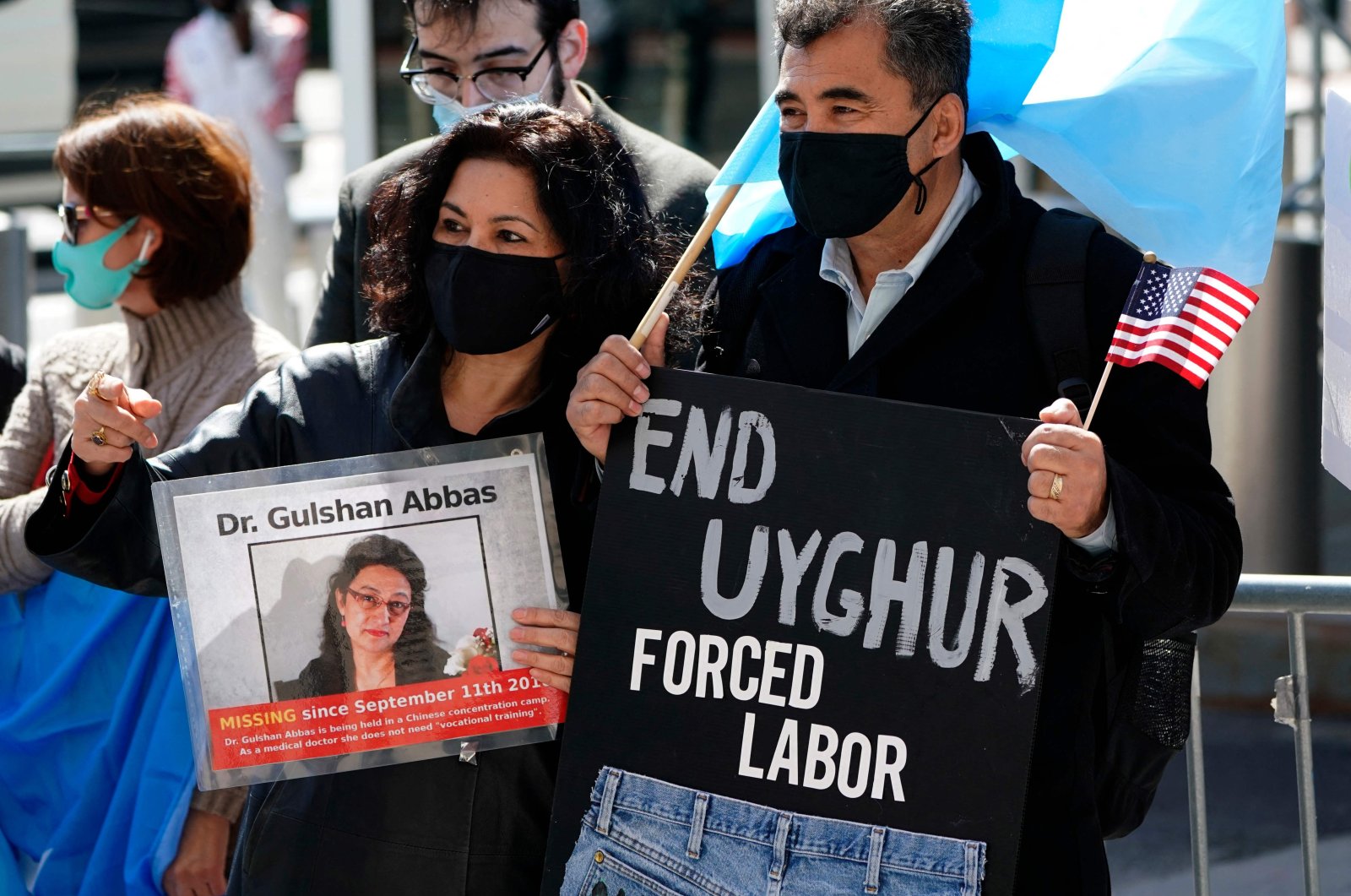 The European Union, Britain, Canada and the United States on Monday issued a joint statement, calling for an end to China's oppressive practices against Uyghur Muslims in Xinjiang.

"We, the Foreign Ministers of Canada and the United Kingdom, and the United States Secretary of State, are united in our deep and ongoing concern regarding China’s human rights violations and abuses in Xinjiang. The evidence, including from the Chinese Government’s own documents, satellite imagery, and eyewitness testimony is overwhelming. China’s extensive program of repression includes severe restrictions on religious freedoms, the use of forced labour, mass detention in internment camps, forced sterilizations, and the concerted destruction of Uyghur heritage," the statement said.

"Today, we have taken coordinated action on measures, in parallel to measures by the European Union, that send a clear message about the human rights violations and abuses in Xinjiang. We are united in calling for China to end its repressive practices against Uyghur Muslims and members of other ethnic and religious minority groups in Xinjiang, and to release those arbitrarily detained," the parties, which launched coordinated sanctions against officials in China over human rights abuses in the far western region, said in the joint statement.

"We underline the importance of transparency and accountability and call on China to grant the international community, including independent investigators from the United Nations, journalists, and foreign diplomats, unhindered access to Xinjiang. We will continue to stand together to shine a spotlight on China’s human rights violations. We stand united and call for justice for those suffering in Xinjiang," they concluded.

The EU targeted four senior officials in Xinjiang. The sanctions involve a freeze on the officials’ assets and a ban on them traveling in the bloc. European citizens and companies are not permitted to provide them with financial assistance.

The 27-nation bloc also froze the assets of the Xinjiang Production and Construction Corps Public Security Bureau, which it describes as a “state-owned economic and paramilitary organization” that runs Xinjiang and controls its economy.

British Foreign Secretary Dominic Raab said the measures were part of “intensive diplomacy” by the U.K, the United States, Canada and the 27-nation EU to force action amid mounting evidence about serious rights abuses against the Uyghur Muslim people.

U.S. Secretary of State Antony Blinken said in a statement that “a united transatlantic response sends a strong signal to those who violate or abuse international human rights, and we will take further actions in coordination with likeminded partners."

“We will continue to stand with our allies around the world in calling for an immediate end to the PRC’s crimes and for justice for the many victims," Blinken said.

China responded immediately to the EU's move, slapping sanctions on 10 European individuals and four institutions that it said had damaged China’s interests and “maliciously spread lies and disinformation.”

Initially, China denied the existence of camps for detaining Uyghurs in Xinjiang but has since described them as centers to provide job training and to reeducate those exposed to extremism. Officials deny all charges of human rights abuses there.

Xinjiang had been a hotbed of anti-government violence, but Beijing claims its massive security crackdown brought peace in recent years.

China’s Foreign Ministry denounced the EU sanctions as “based on nothing but lies and disinformation” as it issued its own retaliatory measures.

The ministry announced sanctions against 10 individuals and four institutions, saying that they and their family members would be barred from entering mainland China, Hong Kong or Macao and cut off from financial dealings with those areas.

Among those targeted was Adrian Zenz, a U.S.-based German scholar who has publicized abuses against minority groups in China’s regions of Tibet and Xinjiang. China has said companies and individuals have petitioned to sue Zenz, but it wasn’t clear who the plaintiffs were or how they would pursue legal action across borders.

The ministry did not say what measures would be taken against the organizations. They were listed as the Political and Security Committee of the Council of the European Union, where the 27 national envoys decide foreign and security policy; the EU Parliament’s Subcommittee on Human Rights; the German-based Mercator Institute for China Studies; and the Alliance of Democracies Foundation in Denmark.

“Rather than change its policies and address our legitimate concerns, China has again turned a blind eye, and these measures are regrettable and unacceptable," Borrell said.

“There will be no change in European Union determination to defend human rights and to respond to serious violations and abuses,” he added, and described the coordination between the EU, Britain, Canada and the U.S. as "perfect.”

The new EU sanction system is similar to the Magnitsky Act — Obama-era legislation that authorizes the U.S. government to sanction those it sees as human rights offenders, freeze their assets and ban them from entering the United States.

As part of Monday's move, the EU also imposed sanctions over repression in North Korea, “extrajudicial killings and enforced disappearances in Libya, torture and repression against LGBTI people and political opponents in Chechnya in Russia, and torture, extrajudicial, summary or arbitrary executions and killings in South Sudan and Eritrea," a statement said.

Those targeted in Libya were Mohammed Khalifa al-Kani, leader of Libya’s notorious al-Kaniyat militia, and his brother Abderrahim al-Kani, a member of the same militia. Both are accused of committing extrajudicial killings and enforced disappearances between 2015 and June 2020 in the town of Tarhuna, which they had controlled for years.

Since their escape from Tarhuna last summer following a military defeat, dozens of mass graves have been discovered and attributed to al-Kaniyat militiamen. Last year, the U.S Treasury targeted al-Kaniyat and its leader over the same alleged crimes.