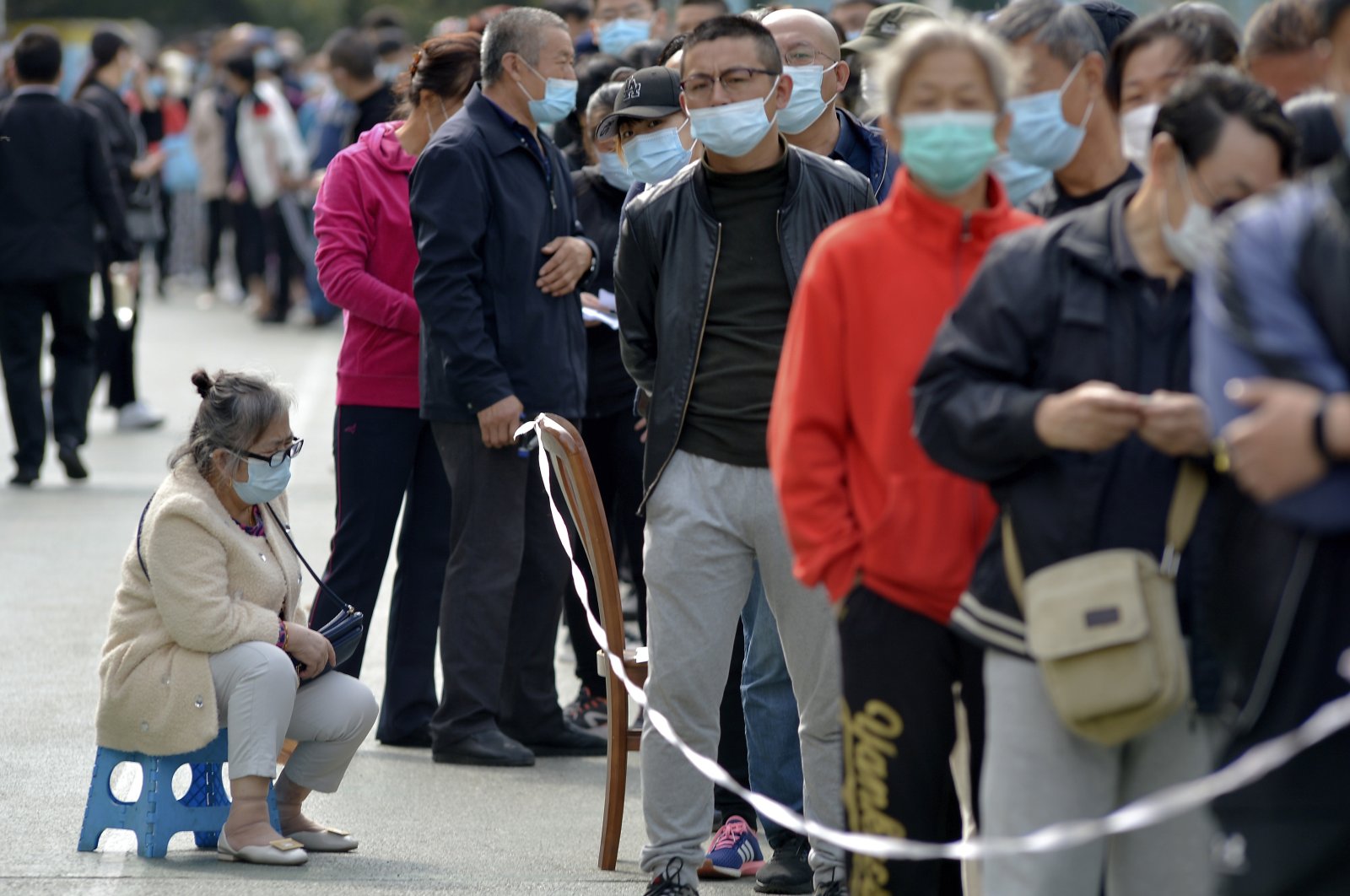 A woman wearing a mask to help curb the spread of the coronavirus sits on a stool as masked residents line up for COVID-19 tests near the residential area, Qingdao in east China's Shandong province, Oct. 12, 2020. (AP Photo)
by Agencies Oct 12, 2020 12:13 pm
RECOMMENDED

Chinese health authorities began testing all 9 million people in the eastern city of Qingdao for the coronavirus this week after nine cases linked to a hospital were found, the government announced Monday.

The announcement broke a two-month streak with no virus transmissions within China reported, though China has a practice of not reporting asymptomatic cases. The last reported virus transmissions within China were four patients found on Aug. 15 in the northwestern city of Urumqi in the Xinjiang region. All the cases reported since then were in travelers from outside the mainland.

In June large areas of the capital Beijing were subject to mass tests after the city of more than 20 million detected virus cases linked to a food market.

The ruling party lifted measures in April that cut off most access to cities with a total of 60 million people including Wuhan in central China. The ruling Communist Party has lifted most curbs on travel and business but still monitors travelers and visitors to public buildings for signs of infection.

Qingdao is a busy port and headquarters for companies including Haier, a major appliance maker, and the Tsingtao brewery. The government gave no indication of whether the latest cases had contact with travel or trade. Authorities were investigating the source of the infections found in eight patients at Qingdao’s Municipal Chest Hospital and one family member, the National Health Commission said. “The whole city will be tested within five days,” the NHC said on its social media account.

China, where the pandemic began in December, has reported 4,634 deaths and 85,578 cases, plus nine suspected cases that have yet to be confirmed.

Governments across the globe are struggling to keep up with a sharp rise in infections and manage growing public frustration over new restrictions as the pandemic enters a second deadly wave. Since December 2019, it has killed more than a million people worldwide, infected nearly 37 million and forced millions more out of work as the pandemic batters the global economy.

The virus has been largely brought under control in China, in stark contrast to many parts of the world still afflicted by rolling lockdowns and high case numbers.

In Europe, surging infection numbers force another round of containment efforts. French Prime Minister Jean Castex has called on citizens to stick to local coronavirus rules, warning the government could impose further restrictions if the statistics worsen.

"We are in a very difficult situation," Castex said in an interview with broadcaster FranceInfo on Monday. Castex said a total lockdown like the one France imposed in the spring was to be avoided at all costs but did not rule out such measures on the local level: "Nothing can be excluded." He added a new version of the infection-tracing app StopCovid would be unveiled on Oct. 22, after a previous one largely failed. Castex also announced Toulouse and Montpellier had joined a list of cities on "maximum alert," including Paris, Lyon and Marseille, where bars have had to close.

Almost 27,000 new infections were reported in France on Saturday, the highest number since the beginning of the pandemic, followed by some 16,000 new cases on Sunday. More than 32,700 people have died in France in connection with the virus.

More than half of French nurses are close to burning out, according to a survey of nearly 60,000 of them published on Sunday, which found they were struggling with canceled holidays and increased work due to coronavirus. The survey carried out by the national French nursing union found that 57% of respondents reported being in a "state of professional exhaustion," up from 33% before the global COVID-19 pandemic struck France early in 2020. The findings underline the strains being felt in the health care sector in Europe, which came under unprecedented pressure during the first wave of infections and now faces another surge in admissions.