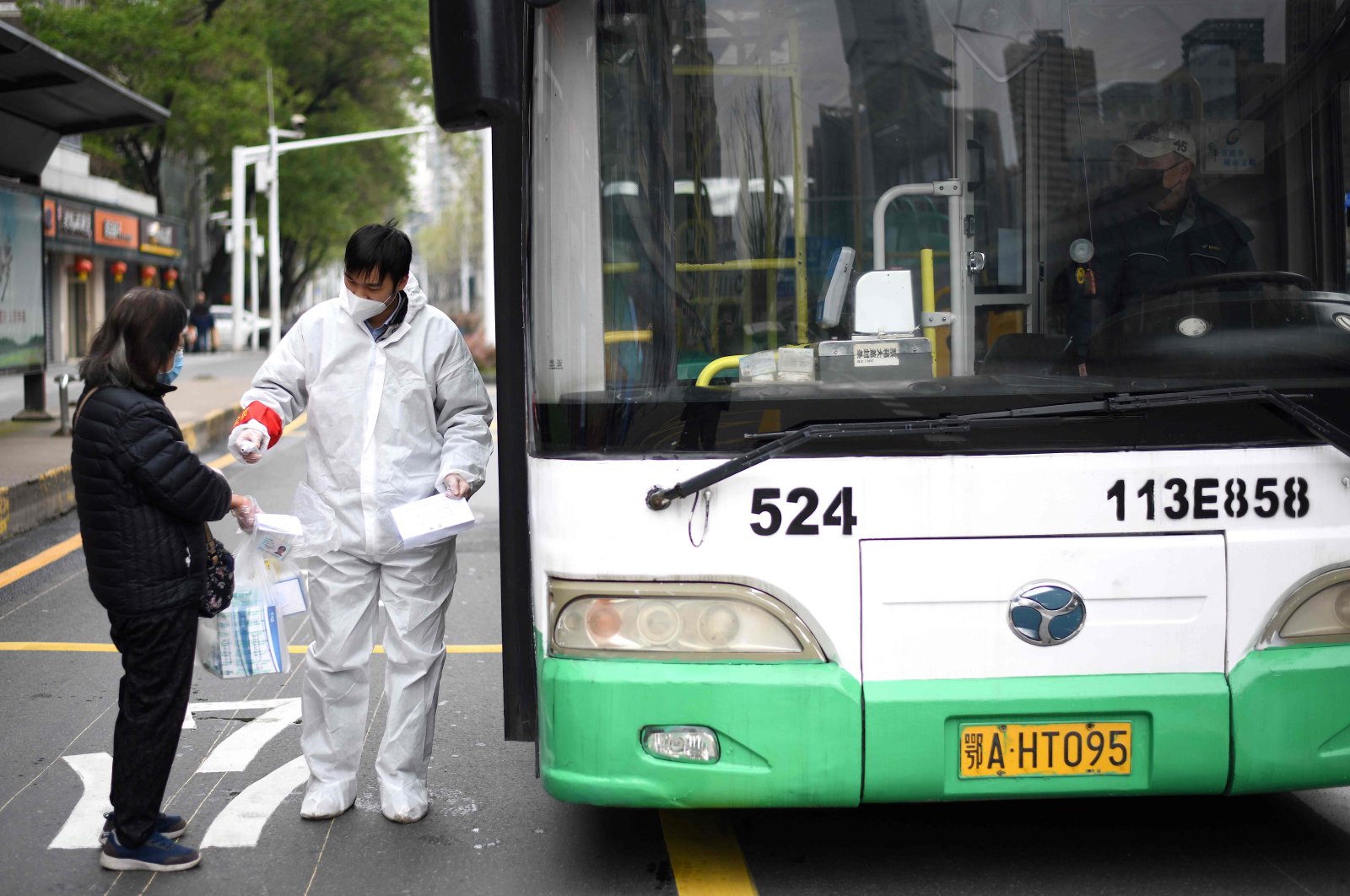 A bus conductor wearing a face mask checks the temperature of a boarding passenger in Wuhan, in China’s central Hubei province on March 30, 2020. (AFP Photo)
by Associated Press Mar 30, 2020 10:22 am
RECOMMENDED

Reasons for Borneo rainforests' replacement of Jakarta as capital

Shopkeepers in the city at the center of the coronavirus outbreak in China were reopening Monday, but customers were scarce after authorities lifted more of the anti-virus controls that kept tens of millions of people at home for two months.

"I’m so excited, I want to cry,” said a woman on the Chuhe Hanjie pedestrian mall who would give only the English name Kat. She said she was a teacher in the eastern city of Nanjing visiting her family in Wuhan when the government locked down the city in late January to stem the spread of the coronavirus.

Some 70% to 80% of shops were open Monday but many imposed limits on how many people could enter. Shopkeepers set up dispensers for hand sanitizer and checked customers for signs of fever.

Wuhan’s bus and subway service has resumed, easing curbs that cut most access to the city of 11 million people on Jan. 23 as China fought the coronavirus. The train station reopened Saturday, bringing thousands of people to what is the manufacturing and transportation hub of central China.

"After two months trapped at home, I want to jump,” said Kat, jumping up and down excitedly. "I want to revenge shop.”

That will be a welcome sentiment to officials who are under orders to revive manufacturing, retailing and other industries while also preventing a spike in infections as people return to work.

Travel controls on most of Hubei province, where Wuhan is located, were lifted on March 23. The final restrictions preventing people from leaving Wuhan are due to end on April 8.

China had suffered 3,186 coronavirus deaths, including 2,547 in Wuhan, as of midnight Sunday, according to the National Health Commission. The country had a total of 81,470 confirmed cases.

Automakers and other manufacturers in Wuhan have reopened but say they need to restore the flow of components before production returns to normal levels. Some are waiting for employees who went to their hometowns for the Lunar New Year holiday and were stranded when plane, train and bus services were all but cut off to Hubei province.

Some parents were on the street with their children but traffic was light.

The owner of a candy shop on the Chuhe Hanjie mall said two of her four employees are back at work but she wasn’t sure whether the others were willing to come back.

"We’ve only prepared a little stock because most people are still afraid of the virus,” said the owner, Li Zhen.

A poster at the entrance to the pedestrian mall asked customers to wear masks, cooperate with fever checks and show a code on a smartphone app that tracks a user’s health status and travel. A banner nearby said, "Wuhan We Are Coming Back. Thank You.”

Two women who wore protective clothing that identified them as medical workers were surrounded by pedestrians who waved Chinese flags at them in a gesture of gratitude. Li gave them bags of candy.

"We may have to wait for a while to see when things can return to normal,” said Li.

Reasons for Borneo rainforests' replacement of Jakarta as capital