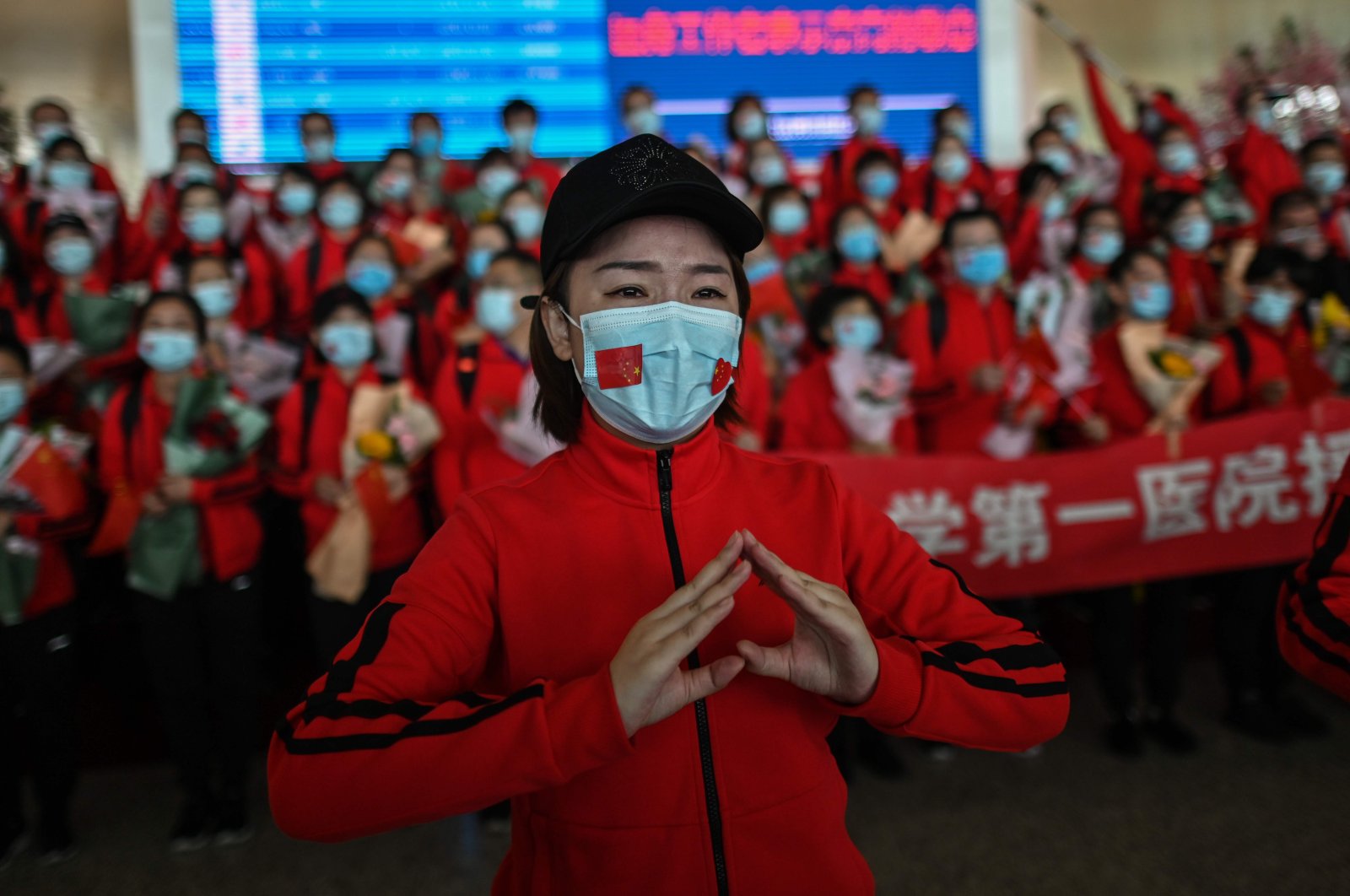 A medical worker from Jilin province tears up during a ceremony as Tianhe Airport is reopened in Wuhan, Hubei province, China, Wednesday, April 8, 2020. (AFP Photo)
by Daily Sabah with Agencies Apr 08, 2020 1:14 pm
RECOMMENDED

After more than two months indoors, millions of Wuhan residents are now enjoying a renewed sense of freedom after the Chinese city's 76-day coronavirus lockdown was lifted Wednesday.

China sealed off Wuhan, a central city of 11 million people, on Jan. 23 in a drastic step that came to symbolize its aggressive management of the virus.

More than 50,000 people in Wuhan were infected and more than 2,500 of them died, about 80% of all deaths in China, according to official figures.

“I haven’t been outside for more than 70 days,” an emotional Tong Zhengkun said as he watched a celebratory light display from a city bridge across the Yangtze river. “Being indoors for so long drove me crazy."

Streets in the city were clogged with traffic and long lines formed at the airport, train and bus stations, as thousands streamed out of the city to return to homes and jobs elsewhere. Yellow barriers that had blocked off some streets were gone, although the gates to residential compounds remained guarded.

Tong said his apartment complex was shut down after residents were found to have contracted the virus. Neighborhood workers delivered groceries to his door.

Such measures won't be entirely abandoned following the end of the city's closure. Schools are still closed, temperatures are checked when people enter buildings, and masks are strongly encouraged. City leaders say they want to simultaneously bring back social and commercial life while avoiding a second wave of infections.

The ability to travel again is a huge relief, however, and around 65,000 were expected to depart Wednesday by plane and train. Wuhan residents are now permitted to leave without special authorization, as long as a mandatory smartphone application powered by a mix of data-tracking and government surveillance shows they are healthy and have not been in recent contact with anyone confirmed to have the virus.

It didn’t take long for traffic to begin moving swiftly through the reopened bridges, tunnels and highway toll booths. Nearly 1,000 vehicles went through a busy highway toll at Wuhan’s border between midnight – when barricades were lifted – and 7 a.m, according to Yan Xiangsheng, a district police chief.

According to airport official Lou Guowei, the first departing flight, MU2527, left Wuhan Tianhe International Airport at 7:25 a.m. for Sanya, a coastal city in Hainan province known for its beaches.

“The crew will wear goggles, masks, and gloves throughout the flight,” chief flight attendant Guo Binxue was quoted as saying by China's official Xinhua News Agency. “It will be very smooth because we have made much preparation for this flight.”

Xiao Yonghong had found herself stuck in Wuhan after returning to her hometown on Jan. 17 to spend the Lunar New Year with her husband, son and parents-in-law.

“We were too excited to fall asleep last night. I was looking forward to the lockdown lift very much. I set an alert to remind myself. I was very happy,” said Xiao, who was waiting for her train outside Hankou station with her son and husband, all three of them wearing masks and gloves.

At the airport, Chen Yating took personal protection a step further, wearing white coveralls, gloves, a mask and a baseball cap. She was waiting to catch a flight to the southern business hub of Guangzhou.

“We are living in a good era," Chen said. “It is not easy to have today’s achievement.”

Restrictions in the city, where most of China’s more than 82,000 virus cases and over 3,300 deaths from COVID-19 were reported, have been gradually eased as the number of new infections steadily declined. The government reported no new cases in the city on Wednesday.

While there are questions about the validity of China’s count, the unprecedented lockdown of Wuhan and Hubei have been successful enough that other countries adopted similar measures.

“The people in Wuhan paid out a lot and bore a lot mentally and psychologically,” resident Zhang Xiang said. “Wuhan people are historically famous for their strong will.”

During the lockdown, Wuhan residents could only leave their homes to buy food or attend to other tasks deemed absolutely necessary. Some were allowed to leave the city, but only if they had paperwork showing they were not a health risk and a letter attesting to where they were going and why. Even then, authorities could turn them back on a technicality such as missing a stamp, preventing thousands from returning to their jobs outside the city.

Residents of other parts of Hubei were allowed to leave the province starting about three weeks ago, as long as they could provide a clean bill of health. People leaving the city still face numerous hurdles at their final destinations, such as 14-day quarantines and nucleic acid tests.

Wuhan is a major center for heavy industry, particularly the automotive sector, and while many major plants have restarted production, the small and midsize businesses that employ most people are still hurting from both a lack of workers and demand. Measures are being instituted to get them back on their feet, including 20 billion yuan ($2.8 billion) in preferential loans, according to the city government.

The exact source of the virus remains under investigation, though many of the first COVID-19 patients were linked to an outdoor food market in the city.