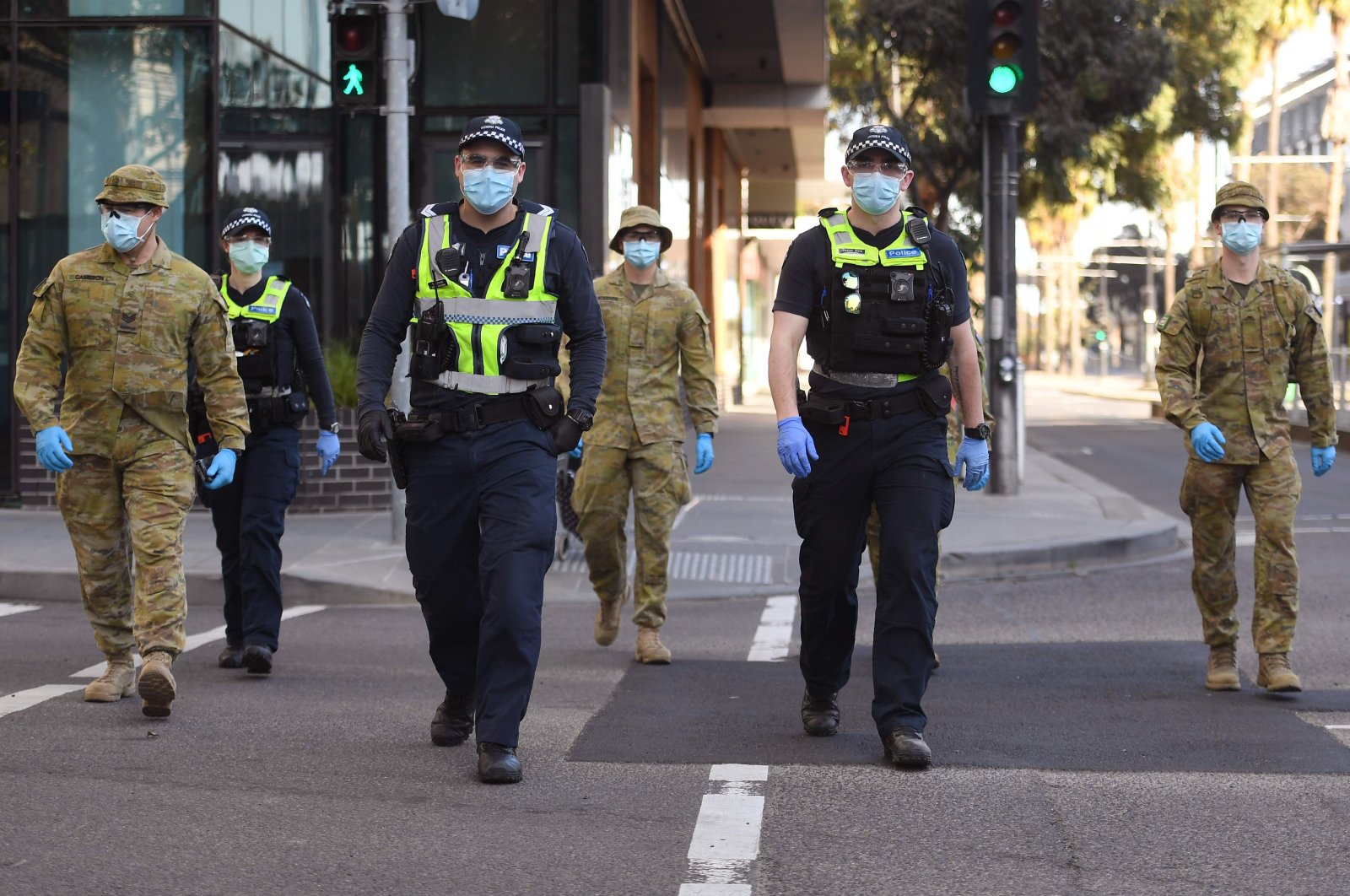 A group of police and soldiers patrol the Docklands area of Melbourne on August 2, 2020, after the announcement of new restrictions to curb the spread of the COVID-19 coronavirus. (AFP Photo)
by French Press Agency - AFP Aug 02, 2020 11:05 am
RECOMMENDED

Australia imposed an overnight curfew on its second-biggest city Sunday and banned people from moving more than five kilometers from home in a bid to control a growing coronavirus outbreak that is infecting hundreds daily.

The harshest rules in Australia to date will see city residents face a curfew from 8 p.m. to 5 a.m. for the next six weeks. Only those carrying out essential work, or seeking or providing care, will be allowed out.

"The time for leniency, the time for warnings and cautions is over," Andrews said.

"If you are not at home and you should be, if you have the virus and are just going about your business, you will be dealt with harshly. Lives are at stake."

Melbourne residents will be limited to an hour of exercise a day, no further than five kilometers (about three miles) from home starting Sunday night.

Only one person per household will be able to shop for essential items each day, also within the same strict radius.

Most school and university students in Melbourne will go back to online learning from midnight Wednesday, just weeks after returning to their classrooms, while weddings will also be banned.

The sweeping new measures follow a city-wide lockdown that began in early July but has failed to curb the spread of the virus, with Andrews blaming the continuing rise in cases on people flouting stay-at-home orders.

Victoria accounts for the vast majority of active coronavirus cases in Australia, recording 671 new cases and seven deaths from the virus Sunday.

Health authorities have linked the resurgence to security bungles at hotels used to quarantine international travelers that allowed the virus to leak back into the community.

The state's chief health officer, Brett Sutton, said an estimated 20,000 cases were averted during Stage 3 restrictions, but flattening the curve to hundreds of new cases a day was "intolerable."

"We need to see those numbers through the eyes of our healthcare workers and the kind of awful fear that they have about what it means for people presenting to hospital," he said.

The virus has spread rapidly among vulnerable residents in aged-care centers, where government disaster relief teams have been deployed to replace infected staff.

Outside Melbourne, the rest of Victoria will move to a Stage 3 lockdown from midnight Wednesday with people allowed to leave home only for essential work, study, care and needed supplies.

Elsewhere in Australia, other states and territories have for weeks reported few or no new cases while relaxing restrictions.

They have, however, banned visitors from Victoria and Sydney – another virus hotspot.

New South Wales Premier Gladys Berejiklian said people were now being "strongly encouraged" to wear masks, particularly on public transport, in shops and at places of worship as the state attempts to avoid the fate of neighboring Victoria.

"We are holding the line and doing OK but I cannot stress enough that the next few weeks will make or break us, in terms of the way we get through this pandemic," she told reporters in Sydney.

Berejiklian added that unlike in Victoria, masks were not compulsory but would instead act as a "fourth line of defense" after testing, social distancing and hand-washing.

Australia's total reported infections reached almost 18,000 on Sunday, with 208 deaths in a population of 25 million.