Donors pledge $1.2B for Afghanistan as UN warns of catastrophe 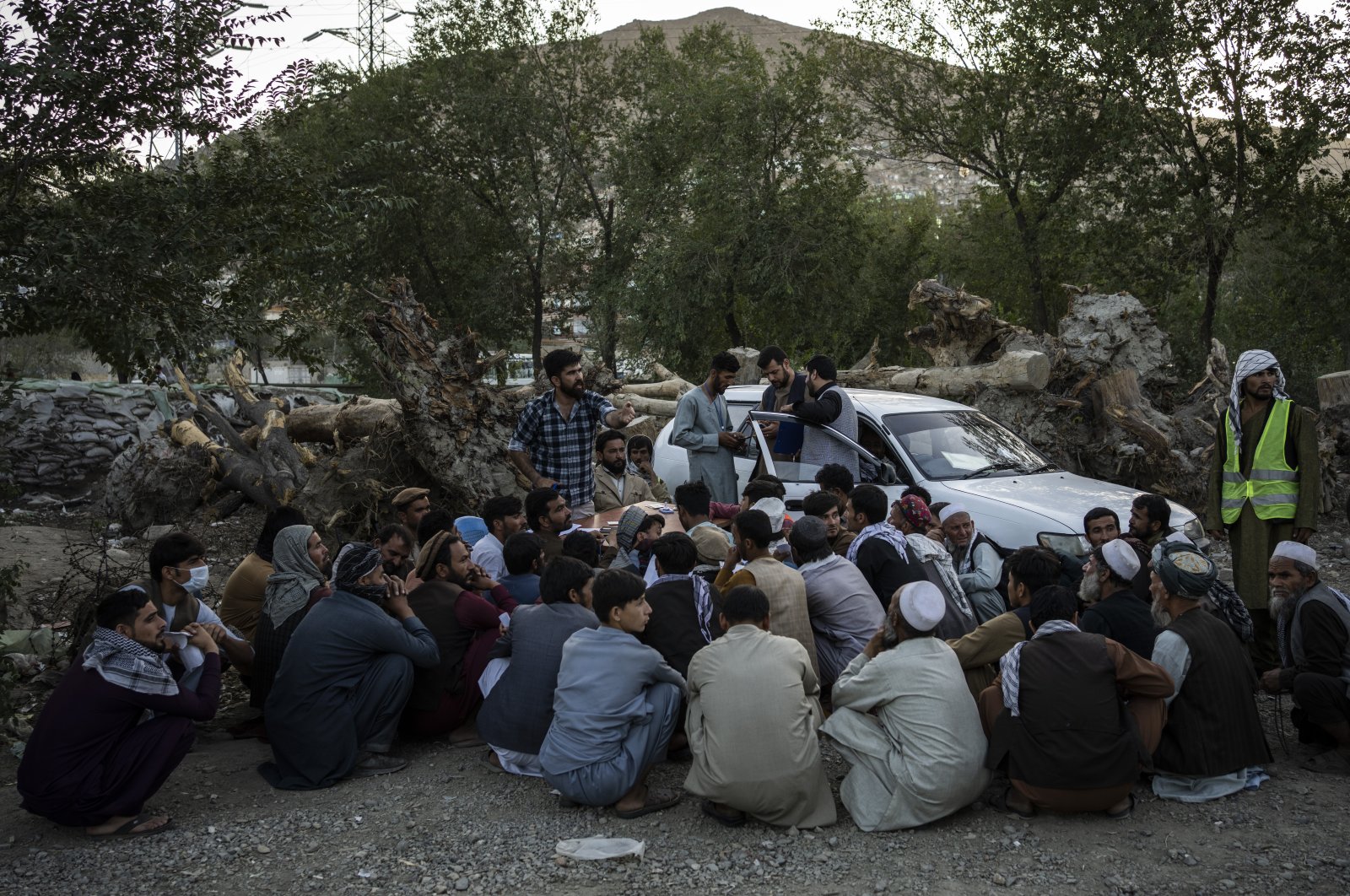 The U.N.-sponsored donor conference on Afghanistan ended with hundreds of millions of dollars in commitments to prevent a looming humanitarian crisis in the war-torn country as dwindling supplies threaten to leave Afghans starved

The U.N. humanitarian chief said $1.2 billion has been promised to help Afghans facing a growing humanitarian crisis in the country and millions in the region, calling the pledges "an important step” toward helping the needy.

Undersecretary-General Martin Griffiths announced the total pledges at the closing of a high-level ministerial meeting in Geneva on Monday that was seeking $606 million until the end of the year to help 11 million people. Griffiths says the $1.2 billion includes funding for that appeal as well as the regional response to the Afghan crisis, which U.N. refugee chief Filippo Grandi spoke about from Kabul.

Griffiths urged donors to turn the pledges into cash contributions as fast as possible, saying that "the funding will throw a lifeline to Afghans” who lack food, health care and protection. He said the meeting showed solidarity with the Afghan people but added that "Afghanistan faces a long and hard road ahead” and this "is far from the end of the journey.”

In the opening remarks to the donor conference on Monday, U.N. chief Antonio Guterres said that Afghans are living in the “perhaps their most perilous hour” and urged the international community to engage with the Taliban and to provide the "people of Afghanistan" with a "lifeline."

“We need to ensure that our humanitarian response saves lives but also saves livelihoods,” he said, adding that many Afghan citizens could be deprived of food by the end of September. Earlier, the World Food Programme (WFP) warned that some 14 million people were on the brink of starvation.

Guterres said he believed aid could be used as leverage with the new rulers of Afghanistan to exact improvements on human rights, amid fears of a return to the brutal rule that characterized the first Taliban regime from 1996 to 2001.

"It is impossible to provide humanitarian assistance inside Afghanistan without engaging with the de facto authorities," the U.N. secretary-general told ministers attending the Geneva talks. "It is very important to engage with the Taliban at the present moment."

Guterres urged nations to "find ways to allow for an injection of cash in the Afghan economy" in order to avert an outright collapse that would have "devastating consequences" for Afghanistan and the wider region.

"I don't think that if the de facto authorities of a country misbehave, the solution is to do a collective punishment to their people," he said.

Griffiths called the recent situation in Afghanistan "very dire," following the Taliban's power grab after a sweeping military campaign across the country. He told Doha-based media outlet Al-Jazeera that the U.N. wants to ensure that money was flowing directly to those humanitarian services that were working on the ground, providing Afghans with assistance.

Several nations have already offered their help in order to avoid a catastrophic humanitarian crisis. China pledged $31 million in food and health supplies as well as 3 million coronavirus vaccines. Beijing alongside Moscow said that the main burden of assisting Afghans to maintain their livelihoods lies with Western countries since their militaries were stationed there for two decades.

“The U.S. and its allies have a greater obligation to extend economic, humanitarian and livelihood assistance,” said Chen Xu, China’s ambassador to the United Nations in Geneva.

Meanwhile, Spain’s Foreign Ministry says the country will make a 20 million euro ($23.6 million) contribution to humanitarian efforts to assist Afghans, with nearly a third of it to be spent this year. Foreign Minister Jose Manuel Albares said that the goal should be "to avert the drama of a humanitarian crisis of epic proportions,” according to a statement by his ministry. Neighboring Norway pledged Monday an extra 100 million kroner ($11.5 million) to be sent via different organizations of the United Nations and the International Red Cross (ICRC), among others. "More than 18 million people in Afghanistan now need protection and life-saving assistance. Half of all children are at risk of acute malnutrition,” said Norwegian Foreign Minister Ine Eriksen Soereide.

Denmark said at the Geneva donor conference on Afghanistan that it is earmarking 240 million more kroner ($38.1 million) for the ailing country. Foreign Aid Minister Flemming Moeller Mortensen called the situation in Afghanistan "heartbreaking” and "the situation only looks seems to worsen in the coming months as the winter approaches.” The Danish money also would be channeled through U.N. agencies and Danish organizations working in the region.

France’s foreign minister expressed disappointment in Afghanistan’s newly formed Taliban government, saying the group so far has failed to live up to its promises of offering a more moderate and inclusive style of leadership. Speaking alongside his Qatari counterpart during a visit to Doha on Monday, Jean-Yves Le Drian said that "the response we have seen from Kabul so far is not up to our expectations.”

Le Drian said France and the rest of the international community will continue pressing the Taliban not to harbor terrorists, to allow the secure delivery of humanitarian aid and to protect the rights of women, among other demands.

"We have heard the statements made (by the Taliban), though we are waiting for actions,” Le Drian told reporters, according to The Associated Press (AP). "Words are not enough.”

Qatar’s Foreign Minister Mohammad bin Abdulrahman Al Thani said Qatari officials used those discussions to "encourage the Taliban to engage with the international community” and avoid isolation by preserving the hard-won gains of Afghan people, particularly women, over the years.

The Taliban have promised a milder form of rule this time around, but have moved swiftly to crush dissent, including firing in the air to disperse recent protests by women calling for the right to education and work. The U.N. human rights chief said her office has received credible allegations of reprisal killings by the Taliban of former Afghan security forces, as well as instances in which officials in the previous government and their relatives were arbitrarily detained and later turned up dead.

Michelle Bachelet, speaking on Monday to the Human Rights Council, warned of a "new and perilous phase” for Afghanistan as she criticized the Taliban for a disconnect between their words and actions. She cited "multiple” allegations of Taliban house-to-house searches looking for officials from the previous government and "people who cooperated with U.S. security forces and companies.”

Such searches took place in at least a half-dozen cities, Bachelet said. U.N. staffers have also reported increasing attacks and threats, she added, without providing specifics. "My office has received credible allegations of reprisal killings of a number of former ANSF (Afghan National Security Forces) personnel, and reports of officials, who worked for previous administrations and their family members being arbitrarily detained,” she said. "In some cases, the officials were released, and in others, they were found dead.”

"In contradiction to assurances that the Taliban would uphold women’s rights, over the past three weeks women have instead been progressively excluded from the public sphere,” she told the 47-member council as it opened its autumn session. She said girls aged over 12 have been barred from attending school in some places in Afghanistan, and "Women’s Affairs” departments had been at times dismantled.