Dozens of troops, protesters dead in clashes in Kazakhstan's Almaty 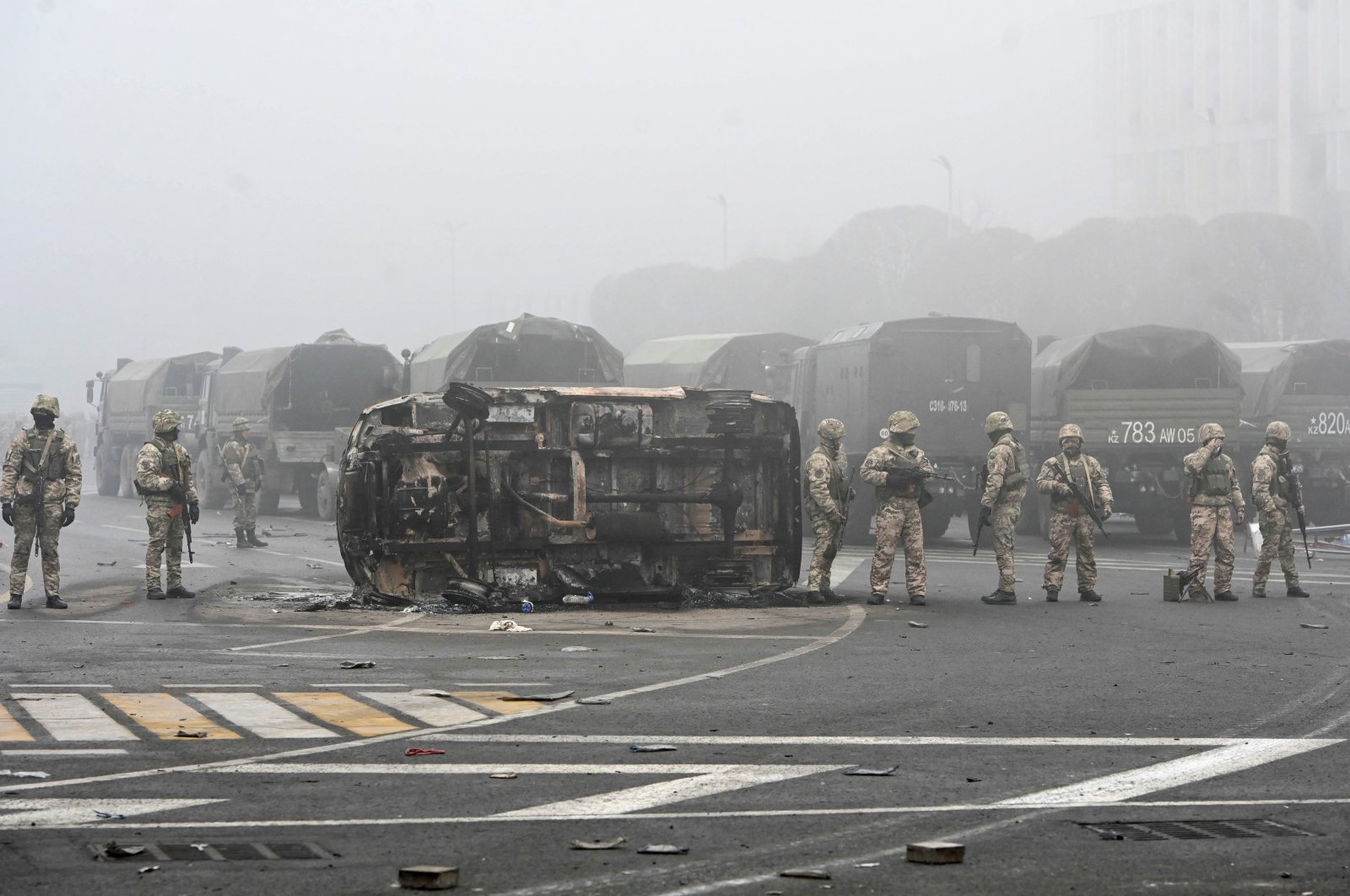 Troops are seen at the main square where hundreds of people were protesting against the government, after authorities' decision to lift price caps on liquefied petroleum gas in Almaty, Kazakhstan, Jan. 6, 2022. (Reuters Photo)
by Agencies Jan 06, 2022 8:48 am
RECOMMENDED

Dozens of protesters and at least a dozen security officers died in clashes in Kazakhstan's largest city and former capital Almaty, with scuffles ongoing in various spots.

Several armored personnel carriers and dozens of troops moving on foot entered the main square of Almaty, Kazakhstan's largest city, on Thursday morning where hundreds of people were protesting against the government for the third day, Reuters correspondents reported from the scene.

Gunshots were heard as troops approached the crowd, according to Reuters witnesses, but the situation in the square had calmed down since then.

State television reported Thursday that the National Bank of Kazakhstan has decided to suspend all financial institutions. The Internet in the country is mostly down.

Around Kazakhstan, protests initially sparked by a hike in fuel prices killed 12 police and national guard troops on Tuesday and Wednesday, prompting the Kazakh president to appeal for help from a Russia-led security alliance, which offered to send peacekeeping forces.

Kazakhstan's armed forces have been called in to restore order and break up riots, but seem to have grown into general revolt, President Kassym-Jomart Tokayev said early Thursday.

Protests initially sparked by a fuel price rise killed 12 police officers and "dozens" of protesters were eliminated overnight as they tried to storm administrative buildings in the country's biggest city Almaty, police told local media on Thursday. One officer was reportedly found beheaded.

Meanwhile, multiple channels on the Telegram messaging service were sharing night-time videos depicting military operations against demonstrators, some from Almaty. The Health Ministry reported over 1,000 cases in which people got injured.

"More than 1,000 people were wounded following riots in different regions of Kazakhstan, nearly 400 among them were hospitalized and 62 people are in intensive care," Deputy Health Minister Azhar Guiniyat told Khabar-24 television.

The protests began Sunday in Zhanaozen, a city in the west where government resentment was strong in the wake of a 2011 strike by oil workers in which police fatally shot at least 15 people. They spread across the country in the following days, and on Tuesday large demonstrations were carried out in Nur-Sultan and in Almaty, the former capital.

Protests that began about fuel prices over the weekend grew violent in the last two days, even prompting the government's resignation and rumors that Tokayev had stepped down. The president said Wednesday he will soon propose reforms for the political system, but did not provide details.

Additionally, he denied rumors he is planning to leave the country, saying he had in fact taken the lead of the country's security council, a position that had, until Wednesday, been controlled by former President Nursultan Nazarbayev, who had continued to exercise power in the country after stepping down in 2019.

"It's my constitutional duty to be with the people. Together, we will get through this dark page in Kazakhstan's history," said Tokayev.

His comments came hours after the national government stepped down, a move that did little to allay the protests and violence. Ministers are expected to remain in their posts until a new Cabinet is formed. The Deputy Premier Alikhan Smailov will take over the official duties as a transitional measure.

On Wednesday, the protests against high fuel prices saw people storm the main administrative buildings in the country's biggest city and descend on the president's residence there, according to local media reports, marking a major escalation in days of civil unrest.

Video published by Kazakh media outlets, including the Tengrinews agency, showed flames coming out of the side of the city government building in Almaty, with black smoke seen rising from the site. Loud bangs and blasts could be heard.

The military had initially cordoned off the area with metal barriers but witnesses reported that demonstrators had managed to gain entrance nonetheless on Wednesday, the agency reported.

A short time later, protesters attacked a residence used by Tokayev in Almaty and set fire to the building, according to local media and videos shared on social media.

Tokayev earlier vowed to take harsh measures to quell the unrest and declared a two-week state of emergency for the whole country, expanding one that had been announced for both the capital of Nur-Sultan and the largest city of Almaty that imposed an overnight curfew and restricted movement in and around the urban areas.

Kazakh news sites became inaccessible late in the day and the global watchdog organization Netblocks said the country was experiencing a pervasive internet blackout. The Russian news agency Tass reported that internet access was restored in Almaty by early Thursday.

Thousands of people have been protesting in Mangystau and Almaty since the weekend, with riots involving Molotov cocktails breaking out in Almaty on Tuesday.

Small protests initially broke out in the western town of Zhanaozen, with demonstrators angry at the increase in the price of bottled gas at petrol stations. They demanded price cuts and called for the government to resign.

At the start of the year, prices for the gas called liquefied petroleum gas (LPG) roughly doubled as the government moved away from price controls as part of efforts to move to a market economy. The director of a gas processing plant was arrested amid reports of price-fixing.

Russia has called for a peaceful solution to the crisis "within the framework of constitutional and legal provisions and through dialogue and not through riots in the streets." The United States and the European Union echoed the calls for calm.

"The United States is closely following the situation in Kazakhstan, a valued partner," State Department Spokesperson Ned Price said in Washington. "We condemn the acts of violence and destruction of property and call for restraint by both the authorities and protestors."

"We ask for all Kazakhstanis to respect and defend constitutional institutions, human rights, and media freedom, including through the restoration of internet service. We urge all parties to find a peaceful resolution of the state of emergency," Price added.

Kazakhstan, the ninth-largest country in the world, borders Russia to the north and China to the east and has extensive oil reserves that make it strategically and economically important. Despite those reserves and mineral wealth, discontent over poor living conditions is strong in some parts of the country. Many Kazakhs also chafe at the dominance of the ruling party, which holds more than 80% of the seats in parliament.

The protests appear to have no identifiable leader or demands. Many of the demonstrators shouted "old man go,” an apparent reference to Nazarbayev, the country's first president who continued to wield enormous influence after his 2019 resignation.