Drought, hunger and poverty force Afghans to sell their daughters 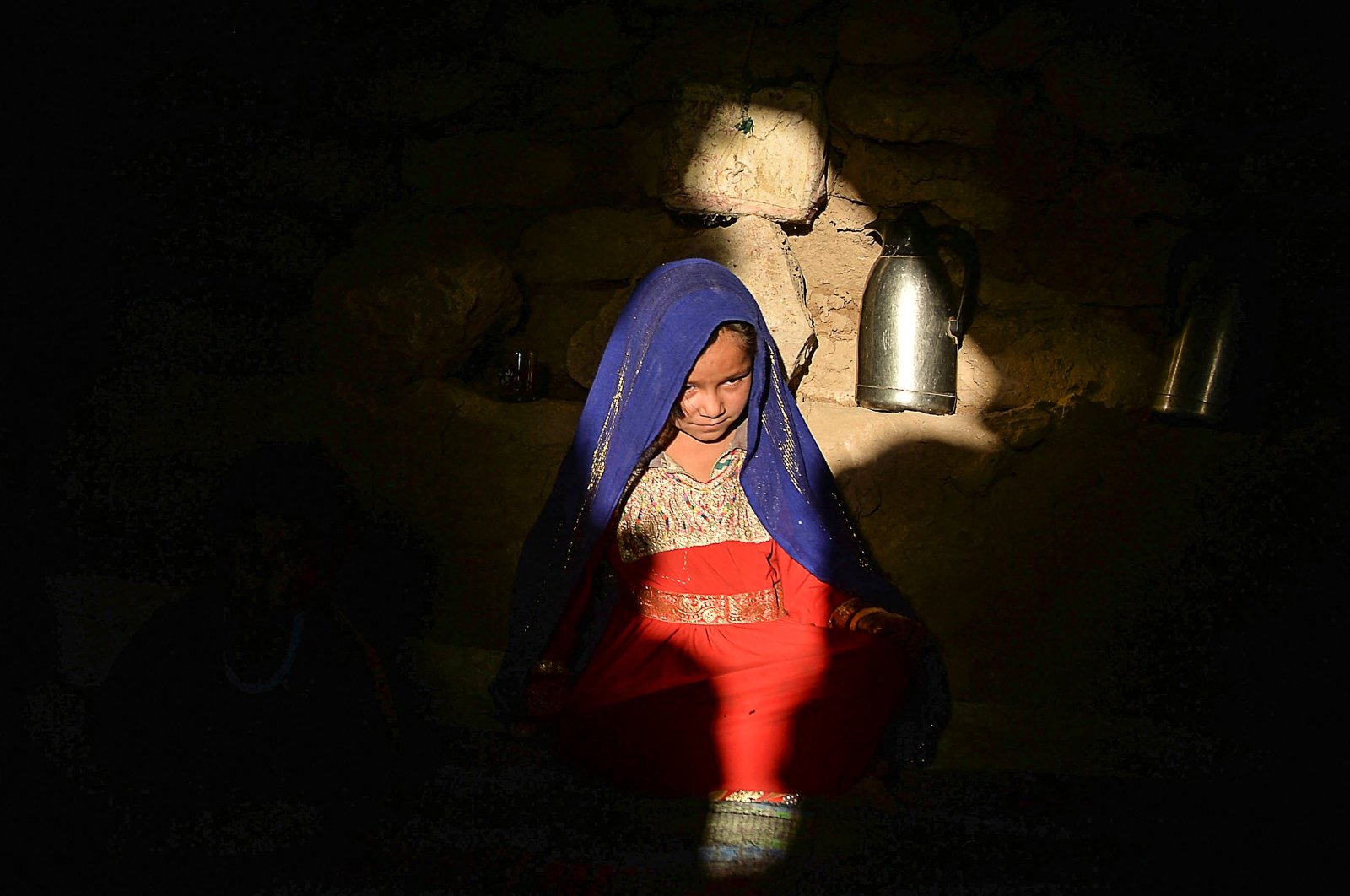 A little girl betrothed to a 23-year-old man to whose family they were indebted, sitting inside a tent at the Shamal Darya Internally Displaced People (IDP) camp in Qala-i-Naw, Badghis Province, Afghanistan, Oct. 14, 2021. (AFP Photo)
by French Press Agency - AFP Oct 26, 2021 10:57 am
RECOMMENDED

Fahima has wept many times since her husband sold their two young daughters into marriage to survive the drought gripping western Afghanistan.

Oblivious to the deal, 6-year-old Farishteh and 18-month-old Shokriya sit by her side in a mud-brick and tarpaulin shelter for displaced people.

"My husband said if we don't give away our daughters, we will all die because we don't have anything to eat," Fahima said of the choice now facing thousands of Afghan families. "I feel bad giving away my daughters for money."

The oldest commanded a bride price of $3,350 and the toddler $2,800 – to be paid in installments over several years until the time comes to join their new families, their future husbands still minors themselves.

Child marriage has been practiced in Afghanistan for centuries, but war and climate change-related poverty have driven many families to resort to striking deals earlier and earlier in girls' lives.

Boys' parents can drive a harder bargain and secure younger girls, spacing out the repayments.

The World Food Program (WFP) warned Monday that more than half the population of Afghanistan, around 22.8 million people, will face acute food insecurity from November.

In Qala-i-Naw, capital of the western province of Badghis – one of the regions worst affected by the drought – there is shame and grief.

Village and displaced people's camp leaders say the numbers of young girls getting betrothed started to rise during a 2018 famine and surged this year when the rains failed once more.

Among farmers driven from their homes, the journalists from Agence France-Presse (AFP) quickly found more than a dozen families who felt forced to sell their daughters into marriage.

Fahima's 25-year-old neighbor in the camp, Sabehreh, ran up a bill at a grocer's shop to feed her family. The business owner warned that they would be jailed if they could not repay him.

To cover the debt, the family agreed that their 3-year-old daughter, Zakereh, would be betrothed to the grocer's 4-year-old son, Zabiuallah.

The infants are ignorant of their future fate, the shopkeeper having elected to wait until the pair are older before taking charge of the girl's upkeep.

"I'm not happy to have done that, but we had nothing to eat or drink," Sabehreh told AFP. "If this continues, we'll have to give up our three-month-old," she said, sitting by the iron cradle holding the sleeping infant, as the first chills of winter penetrated the bleak camp.

Another neighbor, Gul Bibi, confirmed that many families in the camp had resorted to child marriage.

Her own daughter Asho, aged eight or nine, is betrothed to a 23-year-old man to whose family Gul Bibi was indebted. The young man is away in nearby Iran, and she dreads the day of his return.

"We know it's not right, but we don't have any choice," commented Hayatullah, a passerby who overheard the mother's sad tale.

'Never seen them since'

In another Qala-i-Naw camp, Mohammad Assan wiped back his tears as he showed AFP photos of his girls, Siana, 9, and Edi Gul, 6, now living far away with their young grooms.

"We've never seen them since," he said. "We didn't want to do that, but we had to feed our other children."

Like many others, Assan and his family sought shelter in the temporary camp during the fierce fighting in recent years as the now victorious Taliban clawed back control of the country from the United States-backed government.

"My daughters are surely better off over there, with food to eat," he reasoned, trying to console himself as he showed AFP the crusts of bread his neighbors spared for him.

Assan's wife is sick and he has medical bills to pay, so he has already begun looking for a suitor for his remaining 4-year-old daughter.

"Some days I go crazy," his wife Dad Gul said, "I leave the tent and I don't really know where I'm going."

The mothers' grief is long and open-ended: the hard decision to bargain away a child, the months or years waiting for her departure, then the pain of separation.

Rabia, a 43-year-old widow, has done everything to push back the fateful day.

Her daughter, Habibeh, has turned 12 and should have gone to join her future spouse's family a month ago, but she begged them for another year together.

"I want to stay with my mother," whispered the skinny child.

Rabia would refund the $550 she received for Habibeh's hand if she could afford to feed the rest of her family.

Her 11-year-old boy earns 50 cents a day working for a baker, her 9-year-old picks up trash for 30. The children are black with filth, living in a ragged tent. It will be a hard winter.

"As a mother, my heart is broken, but I have to save my sons," she explained.

Camp elder Abdul Rahim Akbar does what he can to save his neighbors from having to make the awful choice, distributing a small ration of bread to the poorest families.

He has seen many fathers sell their daughters, including his own brother. He has even been to see the area's new Taliban authorities to seek their assistance.

The Taliban's interim governor for Badghis province, Maulvi Abdul Sattar, told AFP, "These child marriages are due to economic problems."

Even in camps outside drought-hit Badghis, child marriage is growing.

Outside Herat, the country's third-biggest city, fathers have to harden their hearts.

"I sold my 10-year-old girl. I never would have done it if I had the choice," said landless farmer Allahudin, admitting that if he could find a taker he'd also sell his 5-year-old.

But behind the blunt talk, there is grief and shame at their failure to provide for their families and keep them together.

"I know it's not good," said Baz Mohammad, "But I thought we were all going to die."