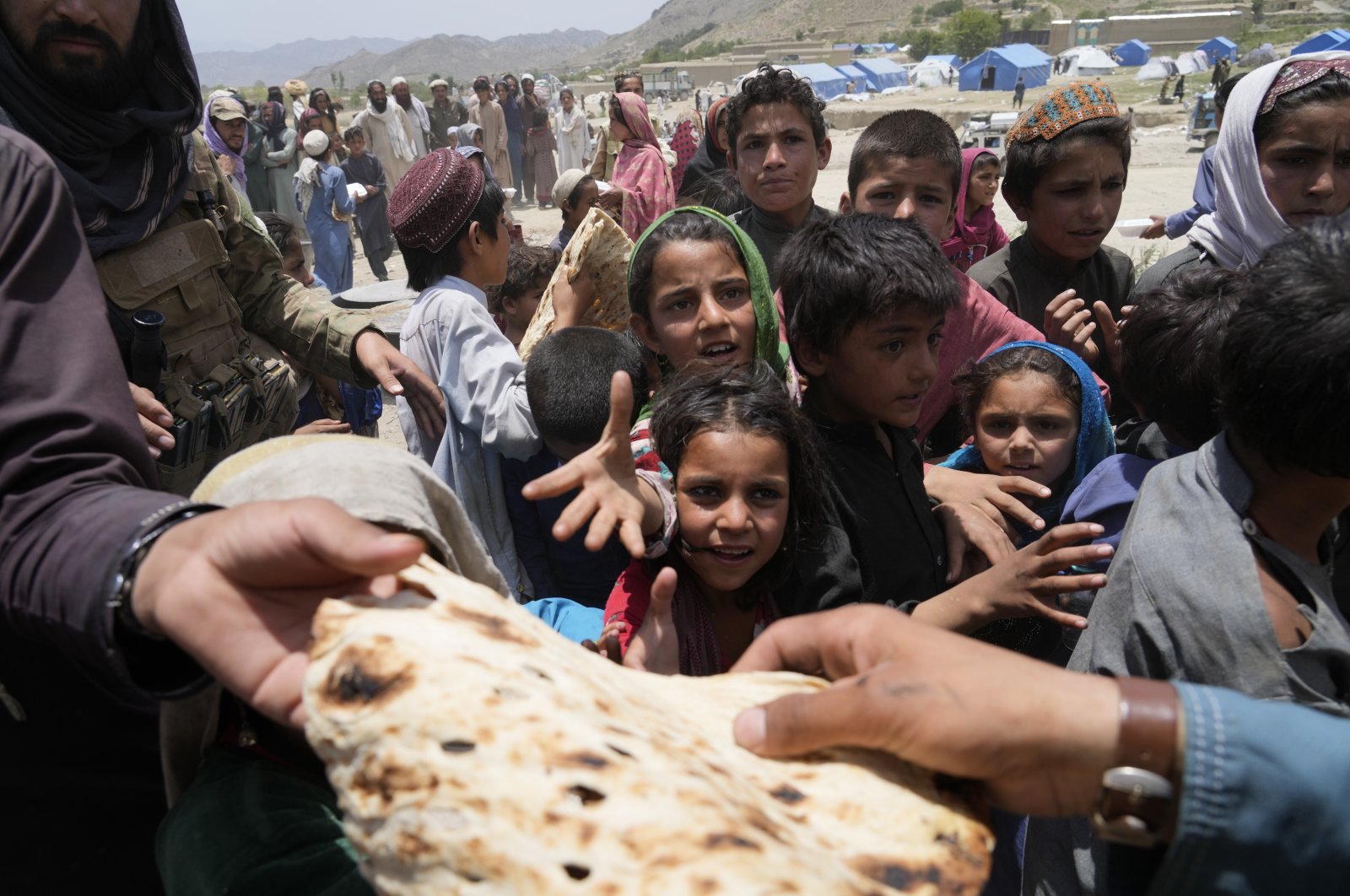 Afghans receive aid at a camp after an earthquake in the Gayan district of Paktika province, Afghanistan, June 26, 2022. (AP Photo)
by Associated Press Jun 27, 2022 11:41 am
RECOMMENDED

The death toll of children in last week's devastating earthquake in southeastern Afghanistan has risen to at least 155, the United Nations said as the scope of the deadliest quake to hit the impoverished country in two decades comes into focus.

The U.N. Office for the Coordination of Humanitarian Affairs (OCHA) said on Sunday that another 250 children were injured in the magnitude 6 temblor that struck the mountainous villages in the Paktika and Khost provinces near the country’s border with Pakistan, flattening homes and triggering landslides. Most of the children died in Paktika’s hard-hit Gayan district, which remains a scene of life in ruins, days after the quake.

Afghanistan's Taliban rulers have put the total death toll from the quake at 1,150, with hundreds more injured, while the U.N. has offered a slightly lower estimate of 770, although the world body has warned the figure could still rise.

The quake has also left an estimated 65 children orphaned or unaccompanied, the U.N. humanitarian office added.

The disaster – the latest to convulse Afghanistan after decades of war, hunger, poverty and an economic crash – has become a test of the Taliban's capacity to govern and the international community's willingness to help.

When the Taliban seized power in Afghanistan as the United States and its NATO allies were withdrawing their forces last August, foreign aid stopped practically overnight. World governments piled on sanctions, halted bank transfers and froze billions more in Afghanistan’s currency reserves, refusing to recognize the Taliban government and demanding they allow a more inclusive rule and respect human rights.

The former insurgents have resisted the pressure, imposing restrictions on the freedoms of women and girls that recall their first time in power in the late 1990s, triggering Western backlash.

Aware of their limitations, the Taliban have appealed for foreign aid. The U.N. and an array of overstretched aid agencies in the country that have tried to keep Afghanistan from the brink of starvation have swung into action. Despite funding and access constraints, convoys of aid have trickled into the remote provinces.

The U.N. children's agency said Monday it was working to reunite children that had been separated from their families in the chaos of the quake. It also has set up clinics to offer mental health and psychological support to children in Gayan traumatized by the disaster.