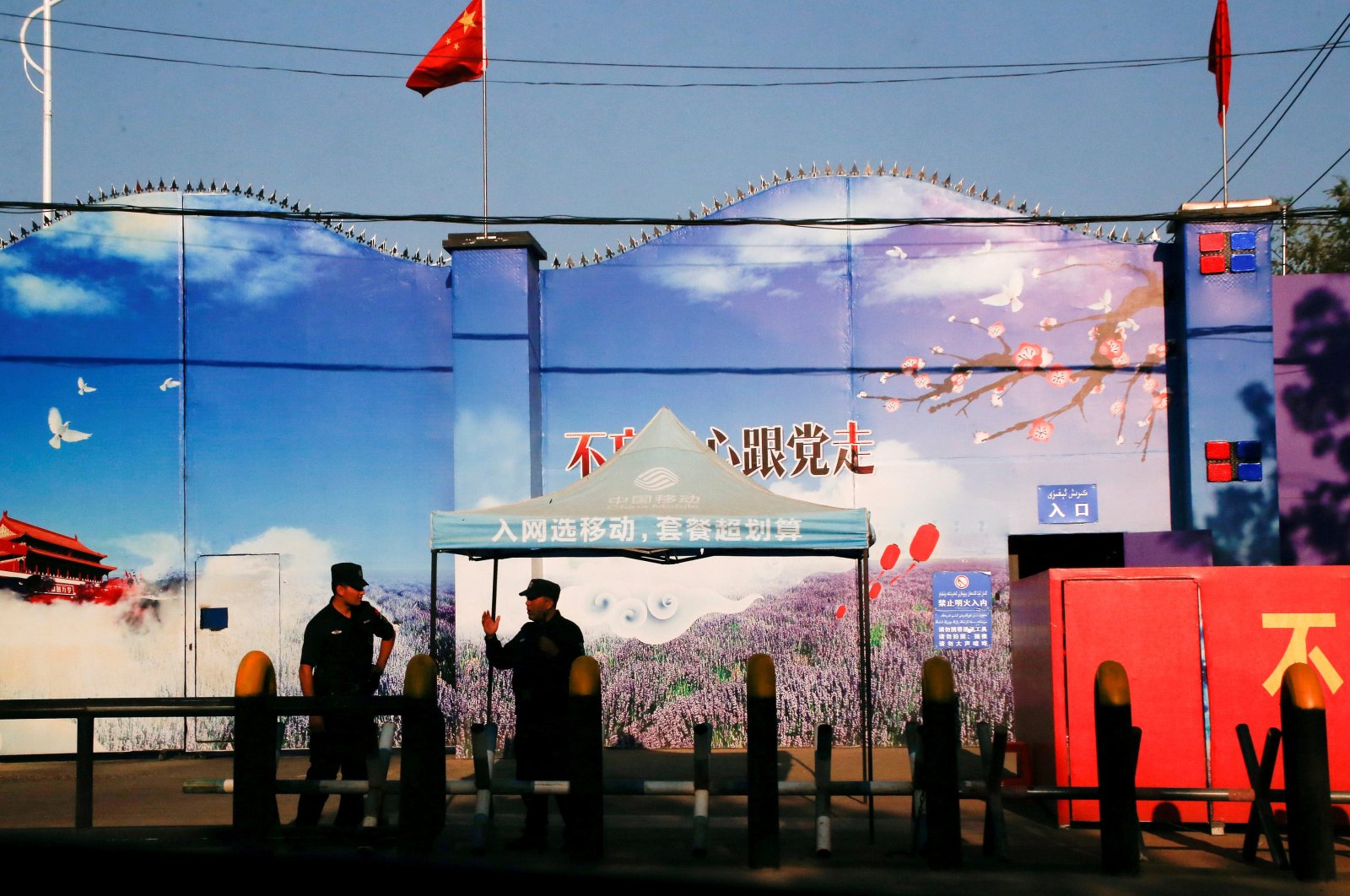 Security guards stand at the gates of what is officially known as a vocational skills education center in Huocheng County in Xinjiang Uighur Autonomous Region, China, Sept. 3, 2018. (Reuters Photo)
by Daily Sabah with Reuters
Mar 15, 2021 4:38 pm

The European Union is expected to impose sanctions against China over human-rights abuses for the first time since the 1989 Tiananmen Square crackdown, according to media reports. Senior EU officials agreed to use their new human-rights sanctions regime to punish Chinese authorities, after lengthy negotiations this week once again highlighted divisions within the bloc over how to approach Beijing.

Germany expects the European Union to agree to human rights sanctions against China, Foreign Minister Heiko Maas said in Berlin on Monday. According to diplomats, the EU is set to sanction four Chinese officials and one entity – with travel bans and asset freezes – on March 22 over human rights abuses in China's Uyghur Muslim minority.

"Yes, I do think there will be agreement," Maas said when asked if he believed the move would go ahead. "With the human rights sanctions, we have created an opportunity to punish human rights violations, and we obviously want to make use of this instrument," he added.

While the decision still requires formal approval, which is expected to happen during a meeting of foreign ministers in March, Chinese officials are included in a broader list of alleged human rights violators from Russia, North Korea and Africa. The names of the officials will only be released after an official decision has been made.

The decision is the latest sign that, despite maintaining open channels with Beijing and striving for deeper economic ties, the EU is ready to confront China on human rights and other issues. The bloc has sanctioned two Chinese individuals and one firm over their cyber activities last year.

China has faced numerous accusations from the global community over its treatment of the Muslim minority in the country. Over 50 global experts in human rights, war crimes and international law said that Beijing "bears state responsibility for an ongoing genocide against the Uyghurs in breach of the Genocide Convention," which draws a clear definition of what constitutes "genocide" and was approved by the United Nations General Assembly (UNGA) in December 1948 by more than 150 countries, including China.

An independent report published by the U.S.-based Newlines Institute for Strategy and Policy think tank last week asserted that China's alleged crimes against Muslim minorities in its western region of Xinjiang have violated all the provisions of the United Nations Convention on Genocide.

"Given the serious nature of the breaches in question ... this report applies a clear and convincing standard of proof," the report said. "China's policies and practices targeting Uyghurs in the region must be viewed in their totality, which amounts to an intent to destroy the Uyghurs as a group, in whole or in part," the report claimed.

A separate report published on Feb. 8 by the Essex Court Chambers in London, commissioned by the World Uyghur Congress and the Uyghur Human Rights Project, similarly concluded that a "credible case" of genocide was being brought against the Chinese government.

The convention does not provide specific punishments or penalties for states or governments that decide to commit genocide. But the Newlines report says the other 151 signatories are responsible for the action under the convention.

"China's obligations ... to prevent, punish and not commit genocide are erga omnes, or owed to the international community as a whole," the report added.

According to the U.S. State Department, up to 2 million Uyghurs and other Muslim minorities have been detained in an extensive network of detention centers across the region, where former prisoners say they have been indoctrinated, sexually assaulted and even forcibly sterilized. China denies allegations of human rights violations, saying the centers are necessary to prevent religious extremism and terrorism.