Evacuation in Kabul echoes US exit from Vietnam's Saigon in 1975 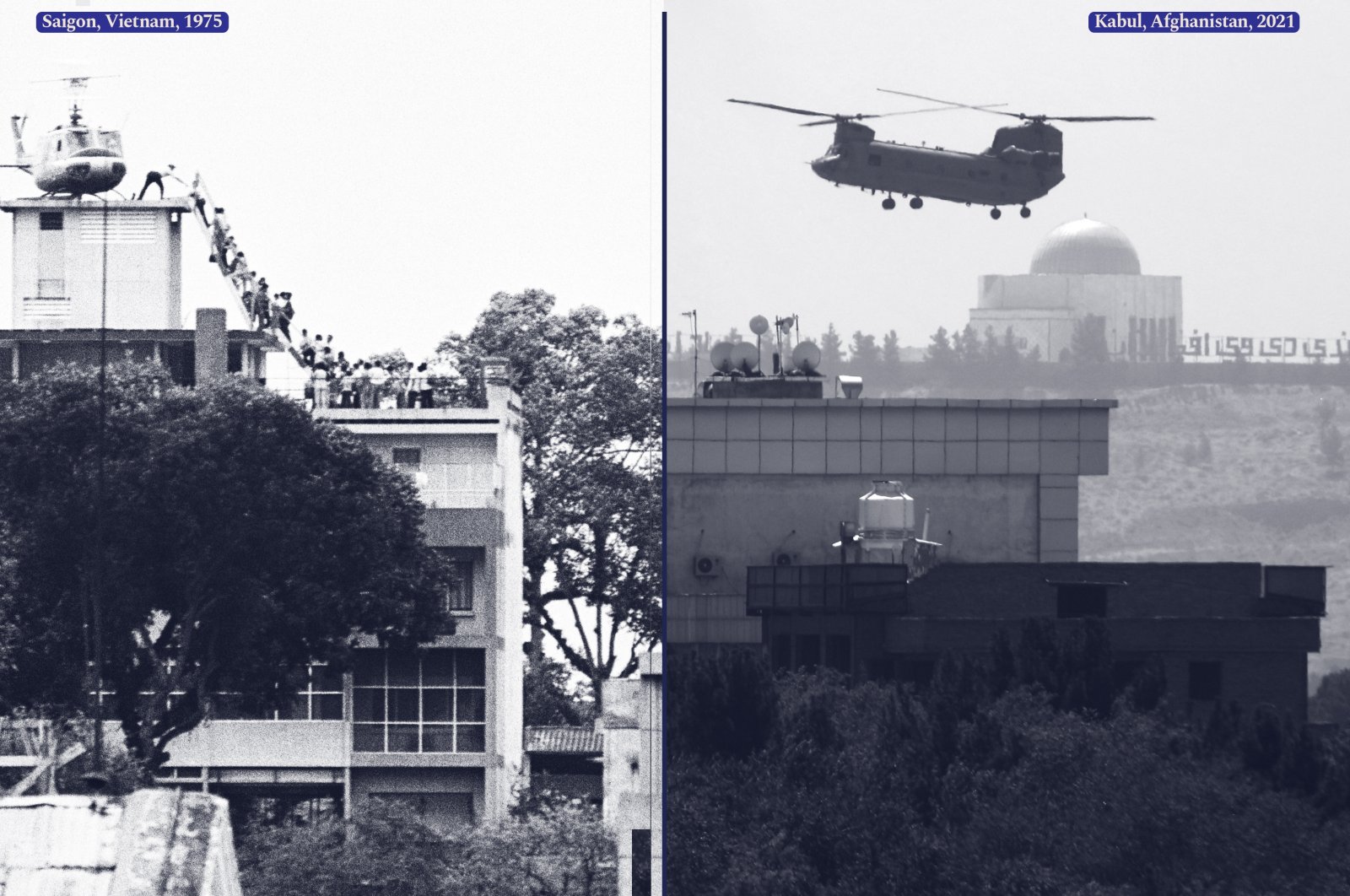 A combination picture of a CIA employee (most likely O.B. Harnage) helping Vietnamese evacuees onto an Air America helicopter from the top of 22 Gia Long Street, a half mile from the U.S. Embassy, Saigon, Vietnam, April, 1975 (Getty Images) and a U.S. Chinook helicopter flying over the U.S. Embassy in Kabul, Afghanistan, Aug. 15, 2021. (AP Photo)
by DAILY SABAH WITH AGENCIES Aug 15, 2021 1:28 pm
RECOMMENDED

The latest developments in Afghanistan where the Taliban forced the country's president, Ashraf Ghani, to relinquish power after entering Kabul have resurrected the events that unfolded in Vietnamese city of Saigon when the United States rushed to evacuate some 30,000 refugees out of the country's largest city before it fell in April 1975.

A photo that immortalized America's defeat in Vietnam, showing evacuees boarding a helicopter on the roof of a building, spread fast on social networks after the U.S. announced the emergency deployment on Thursday.

U.S. Secretary of State Antony Blinken played down America’s hasty exit, saying "this is manifestly not Saigon.” Speaking on ABC’s "This Week” on Sunday, Blinken said: "The compound itself, our folks are leaving there, and moving to the airport.”

He also confirmed that U.S. Embassy workers were destroying documents and other items ahead of fleeing the embassy, but insisted "this is being done in a very deliberate way, it’s being done in an orderly way, and it’s being done with American forces there to make sure we can do it in a safe way.”

Back in June, as the Taliban advance built momentum, Biden himself addressed the Saigon parallels – and dismissed them.

"There's going to be no circumstance where you'll see people being lifted off the roof of an embassy of the United States from Afghanistan," he said.

However, following recent Taliban offensives, the capture of the Kabul embassy and the recent mass evacuation of American citizens from the war-torn country prove otherwise.

Staff from the U.S. Embassy in Kabul were leaving Afghanistan as Taliban forces entered the capital city early Sunday. The Taliban headed to the presidential palace to prepare the ground for a "peaceful transition of power." Shortly after the country's interior minister, Abdul Sattar Mirzakwal, also said that there would be a "peaceful transfer of power" to a transitional government.

Biden announced earlier that U.S. troops would end their 20-year military intervention in the country by the end of August. NATO has already quietly wrapped up its mission in the country. The peace talks that started between the warring sides in Qatar last year made little progress and have now stalled as both sides speak of war.

Washington said on Thursday that to carry out the evacuation of American staff from its embassy in Kabul, 3,000 U.S. troops will secure the airport, 1,000 will be sent to Qatar for technical and logistical support, while 3,500 to 4,000 will be positioned in Kuwait to deploy if needed.

On Thursday, U.S. officials scrambled to answer questions about the mission, with Pentagon spokesperson John Kirby declining to describe it as an "NOE" (noncombatant evacuation operation). He indicated it had no name and avoided talking about evacuations.

The most famous "NOE" mission was Operation Frequent Wind, during which more than 7,000 Vietnamese civilians were evacuated from Saigon on April 29 and 30, 1975 by helicopter.

Asked about the image of American diplomats departing under military protection and the inevitable comparisons with the fall of Saigon, Kirby tried to underline the differences.

"We are not completely eliminating our diplomatic presence on the ground," he said. "Nobody is abandoning Afghanistan, it's not walking away from it. It's doing the right thing at the right time to protect our people."

The Taliban on Friday claimed they had captured Afghanistan's second city Kandahar, capping an eight-day blitz that has left only the capital and pockets of other territory in government hands.